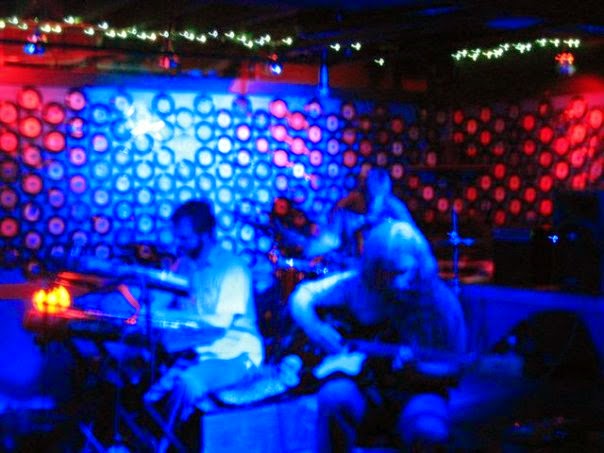 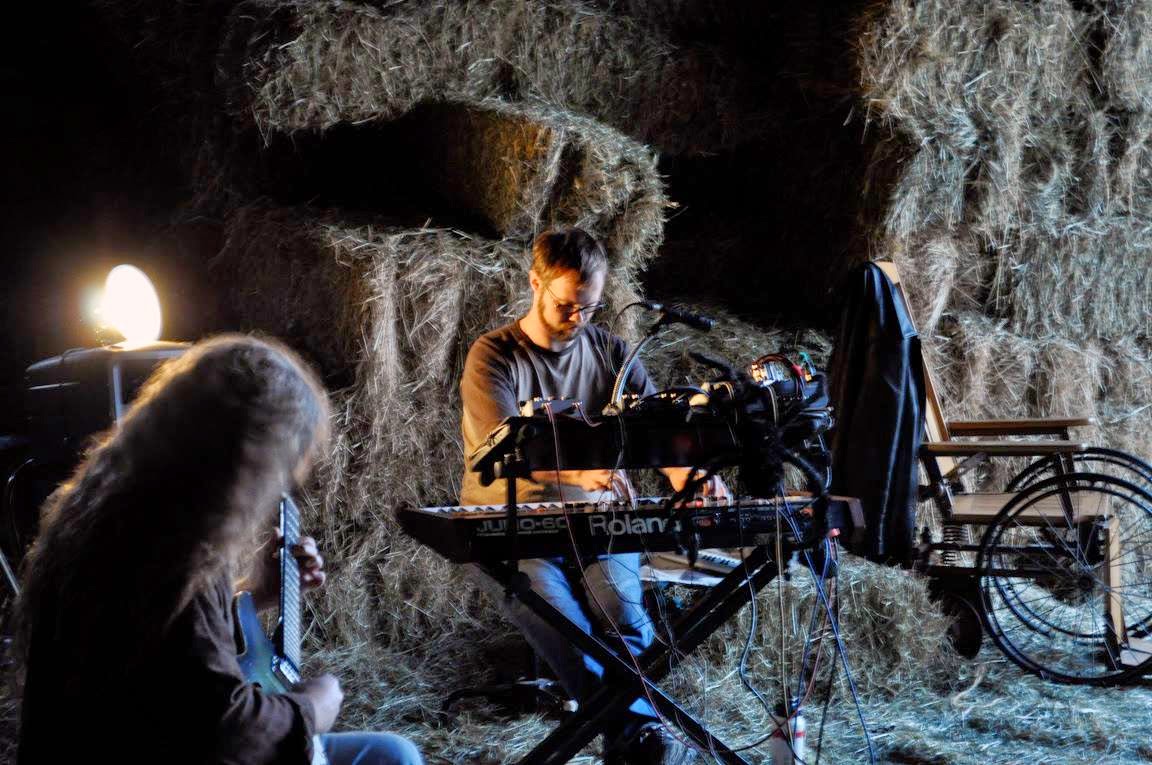 Q. When did Evening Fires starts tell us about the history...
Hmmm, let’s see… need to wake up the memory banks here… It was back around 2005/06, Nathaniel was helping me digitize some 4-track tapes of my old band the Clear Spots, and we started goofing around and making some music on the side of the production activities. Other friends would occasionally pitch in too if they were around. It was pretty rudimentary and there was no great goal in mind, but eventually we realized we had developed some material we kind of liked, and that became the first Evening Fires release.

That beginning kind of set the stage for how the group still functions. It’s usually some of us working on some music, and then others might come in and add to it at different stages ‘til we feel like it’s finished (or as finished as we can make it; or just until we lose interest and want to move on to something else). Lots of folks have played with Evening Fires over the years, probably upwards of 20, coming and going as interest and circumstances allow. I guess the seeds of that arrangement were there from the start.

Q: Who are your influences?
I have no idea how to answer that one, sorry! Everybody who plays with the group brings their own background and interests with them, so it might be possible to sort that out at an individual level, but collectively we have never once discussed such a thing. For sure there are reference points that come up from time to time – someone will say, “Let’s do more of a Can thing here…” or something – but that’s always in the context of specific practical matters – so that would mean “Let’s play it rhythmic and minimalist…” rather than “Can are an influence on this piece” per se… No matter what format we’re working in at any given moment, we’re just channeling the sound – we’re happy enough to all find the same key & make it to a stopping point at more or less the same time, rather than thinking about where it’s coming from or what box to put it in…

Q. Made a list of 5 albums of all time…
This was a tough question, because I didn’t want to just pick personal favorites, since this is about the group; and trying to poll the whole gang isn’t overly practical… So while I do think these five are classics, I selected them because for me at least they have some kind of triangulation point for Evening Fires’ music – not that we sound like them or are anywhere near as good, but something about what they play, or how they play it, or something, seems to resonate in some way with what we do. So, in reverse chronological order for no particular reason:

*Spacious Mind – Live Volume 1: Do Your Thing But Don’t Touch Ours (2002)
Sweden’s Spacious Mind are the greatest, every fan of cosmic psychedelic rock should hear them. Unfortunately their classic releases from the ‘90s and ‘00s are out of print and increasingly hard to find; somebody should do something about that. The studio albums are all essential, but this disc captures how they really take off in a sympathetic live setting, fantastic group playing.

*Pelt – Ayahuasca (2001)
Massive double CD documenting the VA trio’s transmutation from noise-rock deconstruction into avant/drone/folk shamanism. Jack Rose was getting deep into his fingerpicking thing by this point, and combined with everything from banjos and organs to hurdy-gurdy, zither, esraj, and singing bowls, it’s like the album John Fahey and Taj Mahal Travellers never made together. A feast for the ears, you can get lost inside.

*Ghost – s/t (1st album) (1990)
As much as I like the later Ghost albums, the early ones (up through Lamarabirabi or so) still sound like the masterpieces. The first couple especially just felt totally out-of-time-and-space when they came out in the grunge-belabored early ‘90s. Ethno-tribal rites leading to fragile acid-folk with excursions into communal psychedelic heaviness; nobody has done it better.

*Agitation Free – Last (1976)
For whatever reason, Agitation Free remain under-heralded in the Krautrock pantheon, but all their records are superb. Malesch and 2nd might be more obvious, but the posthumous Last is on a different plane. Time-dilating acid-rock improvisation on the version of “Laila” on side 1, while the “Looping” electronics on side 2 take them out into Ash Ra Tempel or Tangerine Dream territory. I can play this over and over and it always feels new.

*Lula Côrtes & Zé Ramalho – Paêbirú (1975)
Classic double LP of northeastern Brasilian folkloric roots, psychedelic jamming, freeform craziness, and perfectly arranged pastoral pieces; all built around the alchemical theory of the four elements, in case the metaphysics weren’t obvious from the sounds. Pernambuco had a lot of incredible music at the time – Lula and Zé solo & in other configurations, Geraldo Azevedo, Flaviola e o Bando do Sol, Alceu Valença (especially Molhado De Suor, such a beautiful album), Ave Sangria (anyone with a spare copy of their LP please contact me) – but Paêbirú in particular seems like it could have been released last month as easily as in 1975.

Q. How do you feel playing alive?
We used to play live more often than we get to these days. There have been periods when we operated almost like a conventional “band,” but those aren’t necessarily the norm. We certainly enjoy playing live, and when we do so we put a lot of thought and planning into what we’re going to play, but in the actual instance it’s still basically improvised. It feels great when it works, like we’re collectively floating on air; but we get the same feeling whether that’s happening at a concert or in the practice room or while recording. And of course, improvising is always kind of a high-wire act, so there are no guarantees.

Q. How do you describe Evening Fires sounds?
Mostly I try not to! I think that kind of thing is probably better left to others. I know what it sounds like to me, but others might hear totally different things, and that’s great – I don’t have any interest in putting my interpretation on anyone else’s ears. Mostly, we’re too busy with the doing to worry a whole lot about the labeling. If you’re familiar with the old tale about the blind men and the elephant, I think there’s some of that in most attempts to describe what we play… 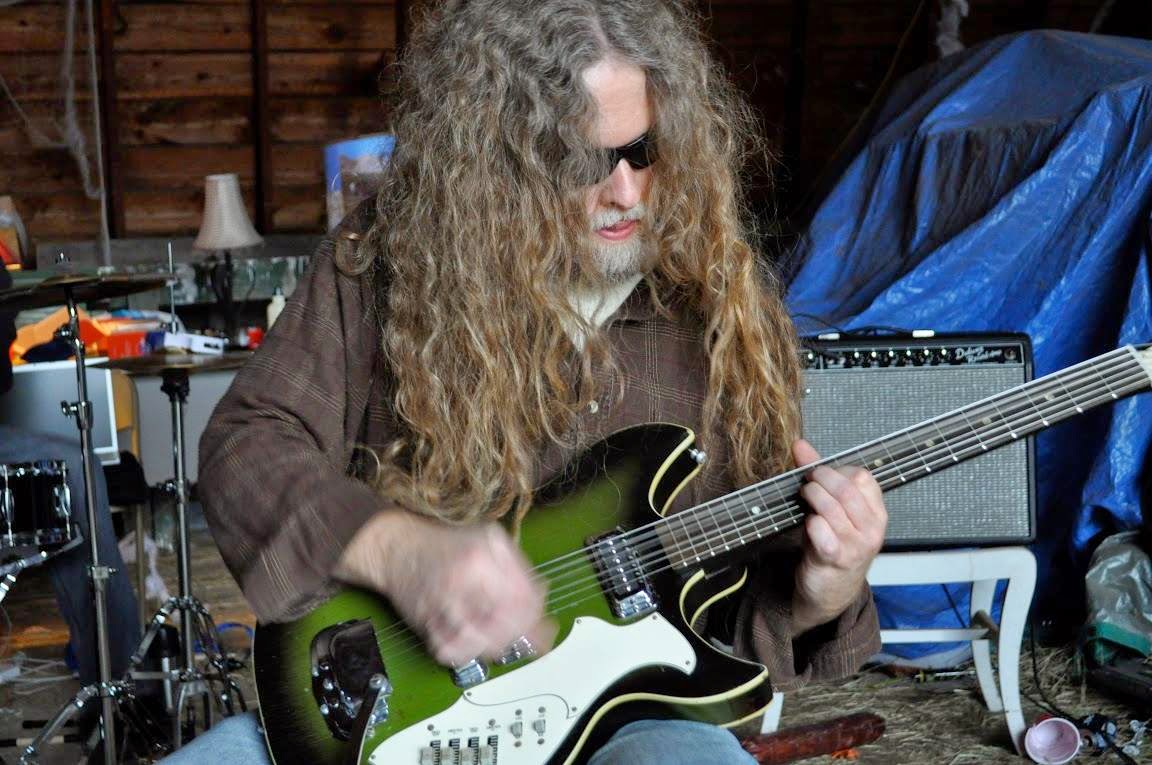 Q: Tell us about the process of recording the songs?
Well, that can take lots of different forms, depending; there isn’t really one set procedure. Much of what we do is built around improvisation, which is part of the recording process too. So we might record some assortment of people – could be the whole band, or various smaller sets – playing, improvising, or maybe working on a piece (though even our “composed” pieces are essentially more structured improvisations); and then we’ll take that and add to it further, or come up with fun things to do in the mix or production. It can set up a lot of interesting possibilities; sometimes you’ll have one group of people starting a track, more of us adding to it later in a different setting, and others finishing it yet elsewhere… It might all be basically improvised, but not necessarily all at the same time. The results mostly seem to come out sounding pretty organic, and can be hard (even for us) to tell the “overdubs” from the “basic tracks,” especially since a lot of that can get turned around in the mix anyway. All that said, sometimes it’s just nice to get folks together, crank everything up loud, and make a big racket. That’s part of it too.

Q. Which new bands do you recommended?
There is so much good music around right now in so many different styles – psychedelic stuff, and folk, and African music, it’s hard to name just a few (and hard to keep up with it all). I’ve been listening to a lot of new South American psychedelic rock, bands from Chile like Föllakzoid, Holydrug Couple, La Hell Gang, all very cool. Montibus Communitas from Peru too, they do this great communal jam thing. I mentioned Spacious Mind up there somewhere, they just released a totally righteous new album called Greazy Green and the Stoney Lonesomes, so wonderful to have new recordings from them. I don’t want to start plugging here, but I’ve also been spending a lot of time with music we’re working on for Deep Water; the new United Bible Studies disc is almost finished, and it is just magnificent, can’t wait to share that with the world. Q: Which bands you love to made a cover version?
Because of what we do and how we do it, I’m not sure that cover versions (as most people would understand the term) are quite in our wheelhouse. There’s a track on one of our CDs that started when a couple of us (apparently spontaneously, it wasn’t planned) tried to play the chord progression from the Beatles’ “Dear Prudence,” but we couldn’t quite figure it out on the spot and the rest of the group didn’t pick up on it, so we all took off on a tangent away from that starting point… The released version picks up after the initial fumbling, and to my knowledge no one has ever made the connection. So I guess we nailed it!

Q: What´s the plans for future....
It looks like a bunch of things are set to become tangible in the relatively near future. There will be an Evening Fires LP (our first LP release!) out later this year via Sunrise Ocean Bender records. It’s called Where I’ve Been Is Places, and What I’ve Seen Is Things, and we are incredibly excited to be working with the label on it. Around the same time we’ll be releasing a CD of entirely different material on Deep Water; working title is Incredible Adventures, though there’s always a chance that could change. There will probably be yet another separate release sometime soon after that on a very cool label, but I don’t want to get ahead of ourselves. With so much production going on it’d be nice just to play some music too, hopefully we can work that in somewhere.

Q: Any parting words?
Thanks for getting in touch and doing the interview! We dig the blog, keep up all the great music coverage.
*
*
*
Thanks Kevin