Yarn with Sunflowerheads - An Interview 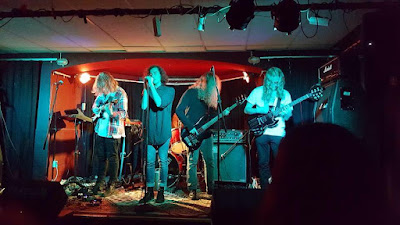 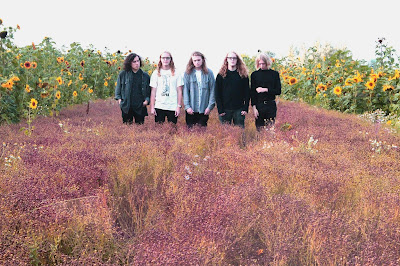 Q. When did Sunflowerheads start? tell us about the history...
Sunflowerheads have existed since January 2015. Oliver and I (Emil) had been talking about starting a band together for some time, and around that time we started looking for some more people to play with.

We found a bassist in Olivers twin brother Viktor, and a singer in the twin brothers friend August. I barely knew August back then and to be honest I was a bit sceptical of including him, since all I knew about him was that he attended a school that specialized in musical theater education. That scepticism didn't last very long though.

We struggled quite a bit in our search for a drummer, we even tried to contact a guy from Brazil who had recently moved to Sweden, but he never replied to our messages. At last we found an equally amazing friend and musician in Philip, who played in our friends band.

Q: Who are your influences?
Naturally we draw influence from universally acclaimed bands like My Bloody Valentine, Sonic Youth and Red House Painters. However, a majority of the feelings we try to channel through our music are influenced by smaller and more modern bands such as Have A Nice Life, Whirr, The Radio Dept, A Place To Bury Strangers and Mass Of The Fermenting Dregs. I also know Viktor is heavily influenced by the slightly controversial band Death In June in his playing style, however strange that may seem.

Q. Make a list of 5 albums of all time
After some friendly but heated discussion we all agreed on:

Q. How do you describe Sunflowerheads sounds?
I won't bother to go into detail to describe the very fundamentals of a shoegaze band’s sound, since I presume 99% of your readers must've gotten that described a million times by now.

Another key element in our music is that Oliver and I try to compose songs using chords that aren't your standard major/minor bar chords. Being two guitarists also allows me to focus more on melodies and textures while Oliver focuses more on chords and riffs and I think that can be heard in our music as well.

Q. How do you feel playing live?
During our first months as a band we did nothing but writing and recording, so our first live show happened very recently. It was sort of a tech hell. The fact that we incorporate lots of effect pedals in our setup didn't really make it easier for whoever mixed us that night, and we already had a few problems during our soundcheck. But then again, the intricacies of recreating your soundscape in an unfamiliar environment truly is one of the great hardships, and charms of shoegaze.

Q. Tell us about the process of recording the songs?
Seeing how the only recording we have done so far as band is a 3 track long EP, it'd be dishonest to act like we have a lot of studio experience. We recorded the EP ourselves, but unlike most DIY non-label bands we actually had the opportunity to record it in a fairly decent and well equipped studio, completely free of charge. All due to me, Oliver, and Viktor participating in a music production course, and as our final project we chose to record the EP. We spent quite some time trying out different microphones, overdubbing guitars and exploring the multitude of expensive studio reverbs and delays, that we otherwise never would've been able to experiment with. The three of us were in charge of recording, mixing and editing. However, Viktor pretty much made the mastering by himself, and we all are really happy with his old school style low-compression master, that you can hear on the EP.

And as for the obligatory anecdote: When we were recording Augusts vocal track for "Yarn", I actually made him wear my clothes. Since the lyrics are written by me, I wanted him to properly step into the role of being me.

Q. Which new bands do you recommended?
We highly recommend: Slægt Stiu Nu Stiu Nolltolerans No Anxieties So Many Mammals

We also really recommend our local shoegazers Lighthouse and tired eyes(it's pretty funny that our single shares this name).

Q: Which band would you love to make a cover version of?
I believe everyone in the band shares the belief that there are lots and lots of commercial pop songs that would fit the shoegaze style really well.

A few months ago August and our shoegaze enthusiastic friend Malin became totally obsessed with the old Cher hit "Believe", a song I'm not particularly fond of myself.

They eventually took their obsession even further and started joking about how sunflowerheads should cover the song and one sunny afternoon I actually sat down and rearranged it into a shoegazey song. Believe it or not, it actually sounded really good.

Q: What are your plans for the future?
To be honest, our plans right now mostly consist of releasing our EP(be sure to be on the lookout for that) and then we’ll see what happens further down the road. We’ve written a bunch of new songs lately so hopefully we’ll go ahead and record those as soon as possible.


Q: Any parting words?
May Kevin Shields be with you, wherever you go.
*
*
*
Thanks