Slow Approaching Nothing with Daisy Face - An Interview 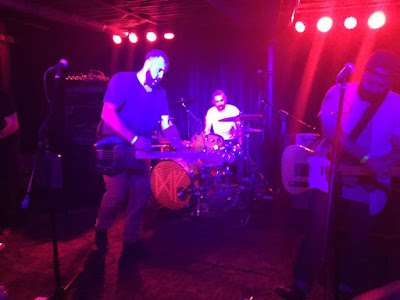 Q. When did Daisy Face start? tell us about the history...
Aron:​Started at Taste of Tops, which is a bar in Tempe. I would frequent Tops almost on a daily basis and became a regular. Brad was a bartender there and we connected on a lot of bands. At some point we figured out that we both played music at some point in our lives, and this was after a year or two of knowing each other from the bar. We decided to “jam” probably because Brad had just got back from Minnesota and wasn’t in a band at the time.

Brad: ​I was out of a band for the first time in almost ten years when Aron and I started playing a little. I had written some of the songs on our Dirt EP and was dying to hear them with a full band. I began talking to Shane who I had known from playing with some of his older sludge bands and being debaucherous on weekends. We had always wanted to play together and I always admired his drumming style. Just heavy hits, not giving a fuck and making sure people knew he was there, even if it wasn’t flashy. An underrated drumming style. Us three started playing together and were still looking for a bass player and singer. I bumped into Adam a couple months after the trio started playing. Adam was from Tucson but had recently moved to Phoenix. I knew him from playing in Tucson in my older hardcore bands. We randomly met again at a local watering hole, and after chatting about Dinosaur Jr. for a little he decided to come sweat it out at our practice space and joined the band.

Q: Who are your influences?
Aron:​I’m always influenced by trying to make interesting chords. Just playing around with different patterns on the fretboard. I’m really visual so that’s how I’ve always approached the guitar.

Q. Make a list of 5 albums of all time…
Aron: ​I’m so bad at these types of list. Here’s some albums I never get sick of and are in my rotation at some point in the year. Some albums just stick around for me:
● Twilight Sad’s Fourteen Autumns & Fifteen Winters – I can’t get enough of that album. It’s been in constant rotation for me since it’s release in 07.
● Red House Painters Songs for a Blue Guitar – I love the mood this album puts me in.
● Ryan Adams’ Heartbreaker – ‘Come Pick Me Up’ is so good.
● Jimmy Eat World Clarity – The singer from Mandingo sold me their first album in 94, and said these guys are going to be huge. He was right and Clarity has been in rotation for me since 99.
● Mineral The Power of Failing – love that late 90s sound.

Adam: ​Hardest question, seems to change every day. I'm also more of an "individual song" person I'm realizing, hard­pressed to find albums I like start­finish:
● Chet Baker: Sings (the amount of restraint shown in his singing is incredible)
● Refused: The Shape of Punk... (changed my life...favorite drumming...also the stand­up bass used in 'deadly rhythm' maybe opened me up to jazz, single handedly)
● Bjork: Post, Homogenic, Vespertine (3 for one, I know, but I have favorite songs on all of them. She's one of the most genuinely artful humans ever, and if I could be her manservant, I would)
● Jimmy Eat World: Clarity (Phoenix pop heroes, I can't not love it)
● At the Drive­In "Relationship of Command" (Honorable mention, Pedro the Lion"Control", Botch"We are the Romans", Beach Boys "Pet Sounds")

Shane: Taake­ Noregs Vaapen Modest Mouse­ This is a long drive for someone with nothing to think about Black Breath­ Heavy Breathing Air­ Virgin Suicides Soundtrack Deafheaven­ Sunbather

Q. How do you feel playing live?
Aron: ​Usually drunk or buzzed.

Brad: ​Adrenaline fueled, sweaty, not lucid, out of body.

Shane: ​Same as Brad. Actually I feel like Brad.


Q. How do you describe Daisy Face sounds?
Aron:​I tell people it’s a whole lot of noise, just so they can expect the worse.

Adam: ​Fuzzy, loud, spacey, heavy, indie rock.
Shane: ​90’s Alternative. That’s a bit off but everyone gets something different out of it.

Q: Tell us about the process of recording the songs ?
Brad: ​Jirix­Mie Paz set up the mics, tells us what sounds good, and helps us mix. We’ve recorded in our practice space by South Mountain and at his beautiful vaulted ceiling home. He is an excellent engineer who is also the bass player for Gay Kiss. Shane and I have both been in bands with him and he has a deep understanding of how sounds should feel. He is a great friend and we all love working with him. We have been told his recordings of us sound like “mini­concerts in their ears” so he obviously gets it.

Shane: ​We usually spend the night naked and in a commune, while Jay plays and records everything for us.

Q: Which band would you love to made a cover version of?
Aron: ​Billy Bragg’s “The World Turned Upside Down” would be a good one.

Adam: ​^Fast Car, I've got a million answers for this. Beach Boys. Hum.

Q: What are your plans for the future?
Aron: ​Record a full­length and hopefully tour for it.

Adam: ​What he said. Maybe take over the world.

Q: Any parting words?
Aron: ​Keep an eye out for our new video for “Quick and Alone.”

Brad: ​How do we play Brazil?