Peaked with Sunshine Faces - An Interview 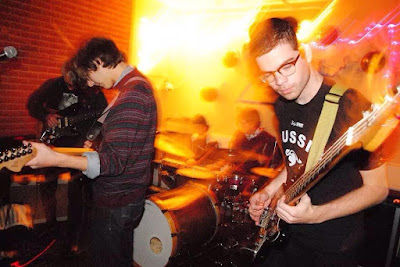 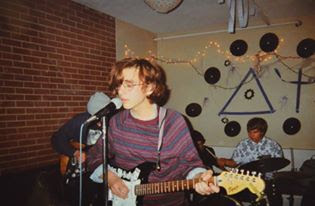 Q. When did Sunshine Faces start? Tell us about the history...
1. Sunshine Faces I guess really started in 2012, when I was formulating and demoing songs which would make their way onto the first record. I didn't know precisely what I wanted to do/what I would call myself until spring 2014, when I released "TEENAGE PRAYER," which i'd recorded as my senior year of high school was ending. After that, after filming the music video, people started asking us to play shows with them, so I was like "heck dude I have to get a live band together." I then got a bunch of friends from high school to join. The rest is history baby !

Q: Who are your influences?
2. My influences are...a lot of my friends or internet friends who make music: Cat Be Damned, The Grapes, Emily Yacina; my best friend Erin's visual art; runescape and talking to people on the Internet; dogs; Like plates that Grandmas would have in their cupboards; swimming; holidays.

Q. Make a list of 5 albums of all time…
3. These records changed my life: Seeing Little Ghosts Everywhere By Rick Eat Acid,I Think I'll Smoke Cigarettes So I Can Be Skinny by the Grapes, Everything by Animal Collective (it's a cop out but w/e) of Montreal's Early Four Track Recordings, most recently Daytime Viewing by Jacqueline Humbert and David Rosenboom.

Q. How do you feel playing live?
4. I like it but playing live scares me. I get nervous and I want it to sound lush and textural like it does on the records but I can't afford pedals. But it is also really fun to be playing music with your friends, and when people get into it and sing the words and get a freaky look in their eyes it feels sort of magical.

Q. How do you describe Sunshine Faces sounds?
5. I don't really know. I feel like it has been mainly called dream pop or bedroom pop which I am comfortable with. I think it's funny when artists get mad about being called bedroom pop and whine about being labeled. Obviously it's a silly blanket term, but like, if someone says bedroom pop I have a more specific idea of what that is than if someone labeled it metal. Labels aren't important but everything in language is a "label." That's the point of language, even if it's inexact. Haha I sound didactic.

But I don't try to think about our sound with words. I guess I would like to sound colorful and textural and pretty and inviting.


Q: Tell us about the process of recording the songs?
6. It really changes drastically each time I set out to record. Usually I... Hum to myself or goof around on guitar/piano. I think about what tones and effects id like to implement, I think about the specific levels and equalization of drums and guitars and synths, and then I slowly layer everything in an order that is forever being altered.

Q: Which bands would you love to make a cover version of?
8. Elliott Smith, Girlpool, Six Pence None the Richer, Tom Petty.

Q: What are your plans for the future?
9. We're going to play a lot of shows in support of the new record. I think we're going on tour with Cat Be Damned in the winter. Maybe we will get signed so I can drop out of school.