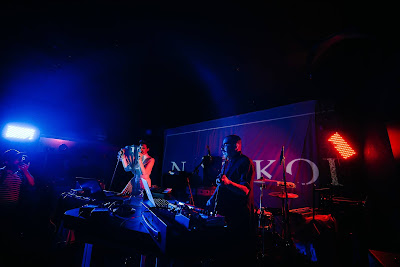 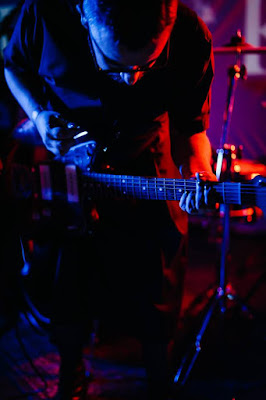 Q. When did Saturno Devorando start? Tell us about the history...
Fiamma: Well, I met Busta (Ronald's nickname) back in 2009 through an art collective he was part of, called NoisNois, and we became friends. He had already been doing music for a while then, but it was mostly instrumental. Around 2010 he asked me if I wanted to improvise some vocals for one of his songs in a couple of concerts. We recorded one song, and then in 2011 we decided to actually start a whole new project separated from his own (Visión Armónica del Caos). We worked pretty slowly, because we didn't really have a structured idea in mind, and it was my first music project, so I was constantly burdened by writer's block and other insecurities. Anyhow, we managed to put out an album in April 2013, but I had to leave the country to go study abroad, and only came back to Costa Rica in December of 2014, which is when we started to make music again. Now we're working on our next album, finally.

Busta: Fiamma had already worked on a track by our friend Pablo Murillo, who is, by the way, in charge of the visual part of Saturno Devorando. I really liked that track so I asked her to sing on an album that I was working on at that time, it was supposed to be a record of different collaborations but it was never fully recorded. 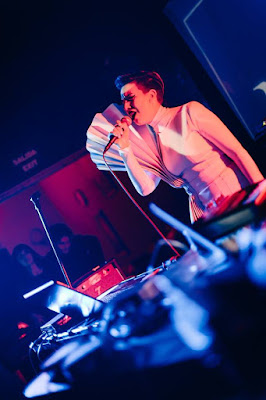 Q: Who are your influences?
F: I think we can speak of shared influences, and of personal ones... For me it varies constantly, but lately I get obsessed with female performers. The vocal, performative and visual aspect of it all is very important, I need to feel I'm listening/looking at an all around artist. It's a very baroque idea. Vocally, more than conscious or direct influences I'd speak about inspiring artists: Björk, Teri Gender Bender, Chan Marshall, Low, Blonde Redhead, Chelsea Wolfe, Jenny Hval. Musically, Godspeed You! Black Emperor!, Swans, Death in June, Dead Can Dance, Portishead.

Me and Fiamma have an important set of common interests, not just on pop music, but also classical, and not just music but also visual arts, cinema, food and coffee. I guess we differ in that I like metal and hip-hop, somewhat.

Q. Make a list of 5 albums of all time…
F: Hard. I don't like to answer these kind of questions because I feel like I change my mind constantly. I'll leave this to Busta.

B: Yeah, it's hard. For me that depends on the mood and the musical phase that I am going through, At this moment I´d say: Maxinquaye by Tricky, GYBE's Lift your Skinny Fists Like Antennas to Heaven, EVOL by Sonic Youth, Third by Portishead and AMM`s The Crypt.

Q. How do you feel playing live?
F: I love it and I hate it. It makes me so excited and I get very nervous, and once it's over I feel completely drained and I don't want to do it ever again. A week later I'm already craving it.

B: I feel exactly like Fiamma. It is a love/hate relationship. After each gig I say to myself that I won´t play live again, ever.

Q. How do you describe Saturno Devorando sounds?
F: Post-rock/noise/shoegaze with self-loathing and nihilism.

B: After a gig, someone told us that our music was beautiful and extremely depressive, and that you have to be emotionally prepared to listen to it. I think it is a bit exaggerated.

Q: Tell us about the process of recording the songs
F: Busta usually sends me a base track (beats, guitar and/or keyboards and some other stuff, it depends) and I work on lyrics and a voice melody. I record a rough sketch and I send him a sample. Then we simply record my voice and we decide together whether there are changes to be made in the mix.

B: We work on the arrangements together and we record different takes to see what works for us. We usually don´t think about how to play a song live until the recording is done.

Q. Which new bands do you recommend?
F: "New" is a very relative term. I can think of things I've gotten to know recently. From Costa Rica, José Saenz. From Chile, Marineros.

B: I really like Holly Herndon's work. Ballancer is a band that I discovered this year at Festival Epicentro, they're amazing. A very talented friend from Guatemala is in a band called FRAAEK, right now I am obsessed with them. From Costa Rica, I find Coco Chan really interesting.

Q: Which band would you love to make a cover version of?
F: Well we already have two covers, one of Death in June and the other of Swans. I've thought about covering Low, Chet Baker or Nina Simone. Also I want to do a cover of an aria. Like, of classical music.

B: I'd love to do covers of non-rock artists, like George Brassens, Vinicius de Moraes, Astor Piazzolla or Madredeus.

Q: What are your plans for the future?
F: Finishing the album we're working on and then seeing where that takes us.

B: Record new tracks is our priority. And then I guess we´ll have a couple of gigs before the end of the year.