Drown with leave. - An Interview 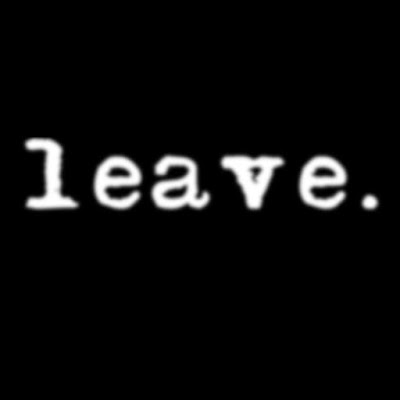 Q: When did leave. start? Tell us about the history...
A: About a year ago. I got drunk and made a bet with my friend Pawel (who plays guitar for leave. now by the way) that I’ll start a shoegaze band. He laughed me off at first and said that I will never find people who would like to play music like that. But we found our drummer Kuba and a few months later our bass player Hubert. We had like only a two songs back then but we wrote some more and started taking it more seriously. So here we are.

Q: Who are your influences?
A: A lot of classic shoegaze bands like My Bloody Valentine, Slowdive etc. Also some newer stuff like Whirr and Nothing. Many post-rock bands and maybe a little bit of stoner music. I listen to a lot of stoner and sludge metal but I don’t think it influenced our music at all. We all have our own influences so it’s a hard question to answer.

Q: Make a list of 5 albums of all time.
A: Marcin: As I said, we all like to listen to different kinds of music so propably we would have to make four different lists. And there are so many great bands and great records that it seems to be impossible to pick up just five of them. Only album that comes to my mind as a really outstanding piece of music is “Lift Your Skinny Fists Like Antennas To Heaven” by Godspeed You! Black Emperor, that album is the best but it’s just my personal opinion.

Q. How do you feel playing live?
A: We don’t know yet haha. To be honest. I mean, everybody in a band had played shows but with some other bands not with leave. For the whole year we were writing songs, rehearsing and trying to make the best of them. Now when we just finished our EP and feel 100% confident with our music we feel like it’s time to start playing live so we'll be trying to get some gigs.

Q. How do you describe Leave sounds?
A: Heavy, low tuned, mellow, melancholic in some way and sometimes sad. A least we’re trying not to get too happy haha. It’s hard to tell since it’s our music so we propably hear it in a different way than other people.


Q: Tell us about the process of recording the songs ?
A: Recording our EP was completely DIY, no studio recordings, no money except for which we spent on beer and cigarettes, nobody except band members was involved. We're broke as always so we just record all the guitars and vocals in our guitarist's house. I’m still in shock that it sounds decent.

Q. Which new bands do you recommended?
A: I don’t listen to much new music. Check out my friend’s band Cerber and they album “Lust for Suffering”, they play really heavy sludgecore shit and they are really good at it. Check out Diuna too. It’s a psychedelic-stoner band and they sing in Polish so it sounds really interesting. Both of these bands are great and we’re friends with them.

Q: Which band would you love to made a cover version of?
A: To be honest – I hate making covers. But I have an idea of covering “Prayer to god” by Shellac in a shoegaze way. That would be interesting. And our bassist wants to do a cover of The Cure.

Q: What are your plans for the future?
A: Write new songs, play some live shows, rehearse, make an full album in a future. And we will see what will happen to us. Maybe something good. If it would, then we would get lots of money, become rockstars and die in a gutter from heroin overdose.

Q: Any parting words?
A: Our EP is out now so you can check it out on our bandcamp. Thanks for the interview and take care.
*
*
*
Thanks