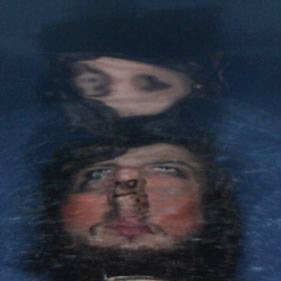 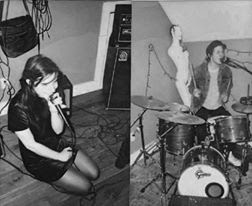 Q. When did Hearing Eyes start? Tell us about the history...
A: Hearing Eyes started just over a year ago... in Autumn. Kamryn and I crossed paths about three months before Hearing Eyes came about and we soon started jamming together. We have very similar preferences and ideas when it comes to art and music so it's easy and fun to connect and build from one another. More and more we were expanding on ideas, utilizing and creating both naturally occurring and synthesized sounds and then bouncing things back and fourth until we could feel what was under us. In the beginning of the project we would build songs up from a drum and synth jam, going off of one another and from there we expanded into backtracking other sounds and instruments and adding in some collage material to allow for the a full circle sound and experience of each composition and to further the sound how we envisioned. Things we were playing instrumentally, whether it be a beat or a certain melody would feed and set a guide for other sounds or instrument to go off of and so on, until things started to stick atmospherically and instrumentally and a certain feeling was derived from hearing these combinations. We then would improv all of the vocals just the same as the instruments, and write sketches of these for later reworking and refinement.

On and on and on...
Q. How do you feel playing live?
A: We have not focused on performance just yet, as we just wrapped up our most recent album 'Feel Real' and have been hidden away writing, recording and mixing that for the past 5 months or so. We are currently rehearsing 'Feel Real' for LIVE shows in the future.. As of right now we are working on loading in full compositions into samples in order to backtrack nearly every instrument as well as vocals and to perform minimally instrumentally and almost entirely vocally and visually...like a film. It all depends on what goes on within the process of rehearsal and how we go about performing.

Q. How do you describe Hearing Eyes' sounds?
A: I would describe our sounds as; atmospheric encompassing sounds from nature and/or digital garble, smothered with thick-synthesized waves and low-end rhythm drum and bass... and brought in to pop-culture by our words. All working together toward an empathy and understanding.


Q: Tell us about the process of recording the album?
A: Well, we recorded this album during a six month period between Grand Rapids, Michigan and Chesterton, Indiana. Most of the tracks on the album were solidified initially with either a drum track or synth track and then built upon. We live in Grand Rapids and record most of our tracks at home but take off to the farm house in Indiana whenever we can for a different perspective and more solidified focus on our music.

Q. Which new bands do you recommended?
A: A few new bands we would recommend; Damaged Bug, The Garden, DENIM (DVNM), Forever Grey, SAPPHIC, Jade TV, Jimmy Pop, Darkly, Heaters, Pleasantrees and the list goes on.

Q: Which bands would you love to make a cover version of?
A: We have covered 'Just You' by Angelo Badalamenti several times at home and plan on doing that LIVE at some point in the future.

Q: What are your plans for the future?
A: We will definitely be setting up and performing local mixed-media art shows with muti-sensory experiences, and of course writing and creating new material. We also have been talking about collaborating with more musicians as well as going in a more classical direction as far as composition and sound goes... who knows what could happen, stay tuned!