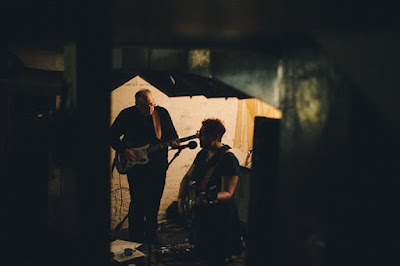 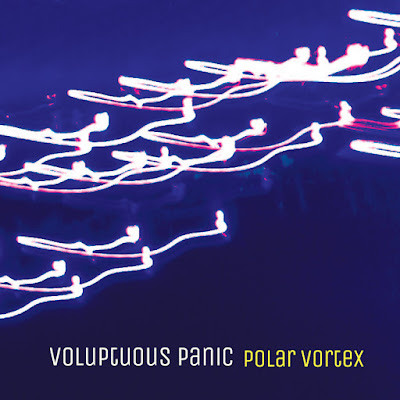 Q. When did Voluptuous Panic start? Tell us about the history...
BRIAN: I first got to know Gretchen in 2008 when I wrote an article about her other band, the Icicles, for our alma mater’s alumni magazine. I really love them -- there has always been something their music that captures my imagination. We’ve all ended up becoming great friends, and I’ve ended up playing with several members of the Icicles in different contexts.

In particular, Gretchen and I bonded over our shared love of shoegaze music. We first got together in 2010 to try our hand at writing a few things. We really liked playing together, but the timing wasn’t right.

GRETCHEN: I went on a hiatus while I pregnant with twins until shortly after they were born. Meanwhile, Brian was busy working on his Ph.D. We reconnected after he moved to Paris in 2012 to teach at the Sorbonne. We were both in weird emotional places, and music was our outlet. We started recording remotely, sharing GarageBand files in a DropBox.

BRIAN: Part of the inspiration for Voluptuous Panic was the Icicles’ 2012 record Renegade Parade, which is an amazing album. Sometimes I think I’m the only person on the planet who ‘got’ that record. It has all of these rich sonic textures and songs that are emotionally raw -- uncomfortable but beautiful at the same time. It was not the sunny Icicles that everybody was used to, but I found Gretchen’s songwriting really compelling. It felt like she was making a different kind of music, and I connected with it on a really deep level.

After I came back to the U.S., we did a few live shows. But we’ve mostly focused on recording as a way of processing the terrifying beauty of life.

Q: Who are your influences?
BRIAN: My musical taste is pretty broad, but no matter the musical setting, I try to bring a certain punk ethos and attitude that comes from my youth. Bands like the Ramones, the Clash and the Minutemen told me it was up to me to figure out what I wanted to do creatively. Sonically, I would say that the Cocteau Twins, My Bloody Valentine and Jesus and Mary Chain are the bands that most influence what I’m doing in with Voluptuous Panic.

GRETCHEN: For me, the big influences for Voluptuous Panic are Slowdive, Ride, The Verve, Kitchens of Distinction, Pure X, Cocteau Twins, Yo La Tengo and Sarah Records. Like Brian, my musical taste is pretty broad. That said, I love layers and layers of reverb-drenched guitar and have always drifted toward melancholy -- which is funny considering the Icicles is so pop centered.

Q. Make a list of 5 albums of all time…
BRIAN: The MC5’s Kick Out The Jams changed my life when I heard it for the first time in high school, and it continues to be a touchstone for me. The pure sonic bombast and energy of it always gets me going. Dinosaur Jr.’s Bug and My Bloody Valentine’s Loveless both make my list for similar reasons. I saw those two bands together in Chicago on that famous 1991 tour. The combination of delicate beauty and crushing volume gave me something to aspire to. It’s that same light/heavy dichotomy has been talked about in music since at least Iron Butterfly.

More recently, I think the Chromatics’ Kill for Love is a perfect record. It’s got these ice-cold synthesizer sounds, but at the center is an enormous beating heart. Lastly, Todd Rundgren’s A Wizard, A True Star is one of the records I’ve listened to the most in my life.

GRETCHEN: I would pick Slowdive’s Slouvaki - that’s by far my favorite shoegaze album of all time. I’m a huge fan of the guitars but also love the harmonies of Neil Halstead and Rachel Goswell (I was an instant fan of Mojave 3 - another big influence of mine). The Verve’s No Come Down takes me to a place above the clouds (Where the Geese Go is one of my favorite songs of all time). Yo La Tengo’s Painful is probably one of the most influential albums for me. I couldn’t get enough of Ride’s Nowhere in the 90s and the album still holds up for me today. I also love Bread’s Anthology. It’s a rock solid album. It always makes my top list.

Q. How do you feel playing live?
BRIAN: Playing live is one of the most exhilarating feelings I’ve ever experienced. But Voluptuous Panic’s live shows are pretty rare. I’m not sure we’ve figured out the best way to translate our recordings for a live setting yet.

GRETCHEN: I love playing live when all our pedals work and we have a good mix, which is always a rarity. I agree with Brian that playing live is one of the most exhilarating feelings.


Q. How do you describe Voluptuous Panic sounds?
BRIAN: I think we’re both interested in creating texture and atmosphere with lots of layers and effects. There’s a certain gestalt that emerges -- something you can hear in the finished mix that isn’t a part either of us play, but instead is an illusion that’s created by the parts working together. I love that.

Specifically from my perspective, I think it’s best when instrumental textures work to highlight Gretchen’s voice, which I think is really gorgeous and deserves to be the centerpiece.

Q: Tell us about the process of recording the songs?
GRETCHEN: We still record remotely — which I love. There is something magical about being the only one in the room when you record. I’m able to experiment a lot more.

BRIAN: I think our recording process is one of our defining characteristics. We tend to work best in isolation. It’s a slow conversation, but it allows us to access deep emotional spaces that might not be possible in a room with a lot of other people.

Q. Which new bands do you recommended?
BRIAN: I think Tunde Olanrian is a visionary genius, both in the music he writes and his live performances. There’s also a hip-hop group out of Oakland called Main Attrakionz who put their rhymes over these tremendous atmospheric beats. I love it.

GRETCHEN: I like Pure X, Vaadat Charigim, Beach Fossils and The Warlocks.

Q: Which band would you love to make a cover version of?
BRIAN: I’ve always thought we could do an incredible version of Olivia Newton-John’s “Magic.”


Q: What are your plans for the future?
BRIAN: I’ve just relocated to Bellingham, Washington. Gretchen will be moving to California soon. We both thrive on Pacific Time, and we’re looking forward to drawing new inspiration from our surroundings.

GRETCHEN: We continue to record and plan to release a song every month or two. We’re also working on releasing a full-length record sometime in 2016.

Q: Any parting words?
BRIAN: This is pretty nerdy, but I stumbled on the term “voluptuous panic” in Erving Goffman’s book Frame Analysis, which I was reading for my comprehensive doctoral exams. He actually used the phrase in French – “une sorte de panique voluptueuse” – which became the name of the first song we ever finished as Voluptuous Panic.
*
*
*
Thanks
https://www.facebook.com/voluptuouspanicmusic
https://soundcloud.com/voluptuous_panic
Postado por TBTCI às 03:36