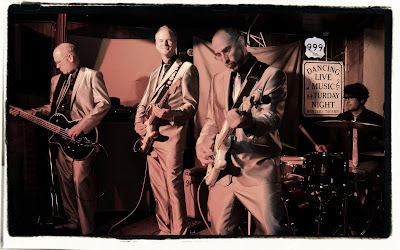 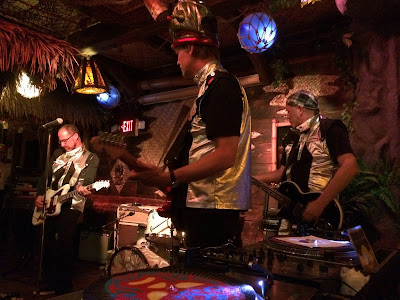 Q. When did The TomorrowMen start? Tell us about the history…
We got started as a full band in the fall of 2006. Prior to that Steve the bassist and I had joined Mel Waldorf's Meshugga Beach Party, and then we started working on creating the TomorrowMen by getting some songs together to present to a drummer and 2nd guitar once we found them. Fortunately it didn’t take long to find Tony and then he suggested his buddy Miles for guitar. Now Tony was only 20 at the time, and in fact he tried out for another surf band and was rejected, because he wasn’t old enough to play in bars. Well, when I heard how good he played I told him “we can wait the 6 months until you’re 21, you’re worth it” And he is, we still play together 9 years later, almost a 3rd of his life :) Eventually we went through a couple 2nd guitarists until we convinced Ferenc to join us. Ferenc, being an old surf music pro, really helped us step up our game. In the meantime we made 2 albums, played the SG101 convention twice and toured Italy in 2012 playing at Surfer Joe.

Q: Who are your influences?
I actually got into surf music kind of late in life, around the age of 38 or so. Prior to that I played power pop/punk and some experimental stuff. So I was really influenced by high energy bands like Buzzcocks, The Undertones, Dead Kennedys, The Damned, EC and the Attractions, Joe Jackson to name a few. As I entered into the world of surf music, my inspiration was drawn by bands like The Nebulas, Satan’s Pilgrims, Laika and the Cosmonauts, The Treblespankers, The Madeira, Slacktone, Jon and the Nightriders and Bambi Molesters.

Q. How do you feel playing live?
For me it’s a mixed bag. When it goes well, that is when there’s some audience response, it’s the best feeling in the world. It doesn’t have to be a big audience, but it’s great when they’re standing up and feeling the music and expressing their pleasure. Also, it helps when my gear works well. It’s very challenging to get in the proper playing mood when there’s technical problems. What I don’t really enjoy is playing to people sitting down and far away from the stage. I understand that’s just a fact of life for a lot of surf shows, but for those kinds of gigs I remain a bit subdued myself.

Q. How do you describe The TomorrowMen sounds?
We stick to pretty traditional sounds. Fender guitars into Fender reverb tanks and Fender amps. I like a little overdrive to my sound, not a lot just enough to give it some character. The difference between us and most bands are in our songs and arrangements. I get bored easily, so I make sure there’s lots of bridges and variations and transitions and extra parts flying around in my songs. You could say they’re pretty dense. But that seems to work for people who like to listen to songs more than once, you’ll hear lots of different things the more times you listen to a TomorrowMen song.


Q: Tell us about the process of recording the songs?
We’ve recorded our 2 albums at Rancho Cielo, which is Ferenc Dobronyi’s (Pollo Del Mar, Frankie and the Poolboy, The Tmen) home studio. We usually record the basic tracks - drums/bass/rh gtr (sometimes) and a scratch track of the lead. Then Ferenc and I will overdub all the various guitar tracks. I tend to go a little nuts, some songs can have a dozen layers of different guitar tracks going. Once it’s all recorded, we give it to our mixing engineer Gary Hobish, who is also a world class mastering engineer. But he’s a surf music fan and really knows what a good record should sound like and is a wizard at music editing software, so we use him for mixing and mastering. I usually sit there with Gary and we just mix that sucker. Takes forever and is very tedious, but it’s a necessary task. Good mixing is what separates the good albums from the great albums.

Q. Which new bands do you recommended
The Mystery Men from Atlanta GA, USA and Bevel Emboss from Amsterdam NL are 2 that come to mind. Like many people at this year’s SG101 convention I really liked Els A-Phonics too.

Q: Which bands would you love to make a cover version of?
We started out doing all covers and have since gone to all originals. So the answer is none. Now, which bands do I wish I could write a song as good as they can? Lots!

Q: What´s the plan for the future….
I’m hoping to work into the set an avant-garde mini-set of dark, minor key, guitar-driven swing music backing a Beat style poet - I’m not kidding. Look for it within a year.

Q: Any parting words?
For all you surf musicians out there I suggest you limit how much attention you pay to your gear, and instead put your effort into just playing. Some of the best music in the world has been played on very poor equipment. It’s all about the fingers, your head and your soul, baby!
*
*
*
Thanks