Revenant with The Common Men - An Interview 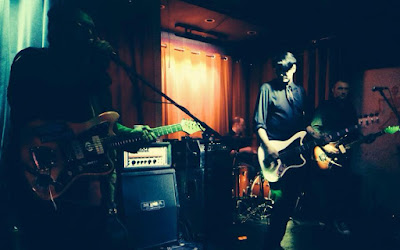 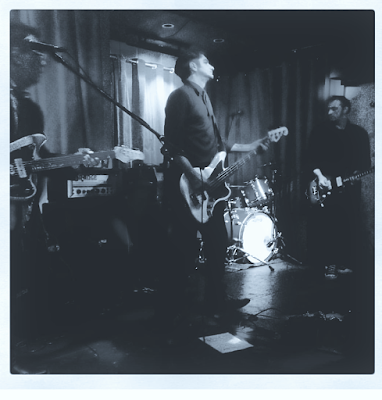 Q. When did The Common Men start? Tell us about the history...
KI: The band officially got its start around 2005 when I was recording demos by myself. We started gigging heavily as a band in 2007. We have had multiple personnel changes since then, and we have taken a couple of "breaks" due to life events. Our story is one of starts and stops--sometimes planned, sometimes not.

The band as it is now has existed since late 2014. It is Kevin Ian on Guitar/Vocals, Josh on Bass, Kevin Rollis on Guitar/Keyboards and Christian on Drums.

Q: Who are your influences?
KR: The Chameleons, Bowie, Interpol, The Cure, My Bloody Valentine, Ride, A Place To Bury Strangers, BRMC, Ultravox (both with and without the '!'), Covenant (the Futurepop one), The Twilight Sad, Manic Street Preachers, The Editors, Suede, Bauhaus...

Q. How do you feel playing live?
KR: After the inevitable pre-gig tensions; like directing a riot. Kevin and Josh like to get their fuzzbox on a lot, Christian seems to have been personally wronged by his kit judging by the force he uses on it! I'm usually busy switching back n fourth from the guitar to the synths (or sometimes playing the synths WITH the guitar). Plenty of energy, noise, & a little bit of ridiculous.

KI: As clichéd as it sounds, playing live and feeding off the energy of the crowd is incredibly cathartic.

KI: I'm a very harsh noise/dissonant guitarist... and my vocals are an acquired taste. KR is incredibly melodic. Josh is a driving punk bassist at heart and Christian is an all-around thunderous drummer. Somehow, it all manages to work in a strange and sometimes beautiful noise.

Q: Tell us about the process of recording the album?
KR: Generally, we record about 80% at our rehearsal stuido in San Francisco, CA with the rest in KI's bathroom (always great ambiance!) or my garage. We usually start recording when we have a good handful of songs written that have been "road tested" in front of an audience. I like to leave a space for happy accidents when recording, so there's always a little something extra going on in the song that you might not pick up the first couple of times you hear it. I'm also a bit prone to insisting "we should have a grand piano at the end of this" or "yeah we could end it here....or we could challenge the gods a little...".

Q: Which bands would you love to make a cover version of?
KR: Hard to say really, I'd love to take a 70's pop song and run it thru the murk, as it were.

KI: I'd absolutely love to do a "cover-exchange" with many of the local bands we know... or any other international bands.

Q: What are your plans for the future?
KR: Promoting our new EP with shows and writing/recording our next album. we're also trying to get some videos made for a few songs and talking to some fellows about ideas n such.

KI: We are a highly prolific band--always has been. We are currently writing an album. The saddest thing about this is we never have enough time on stage to play all the songs we want. We'd play for two hours if we could!

Q: Any parting words?
"For the world to be interesting, you have to be manipulating it all the time" - Brian Eno
*
*
*
Thanks