Monday Mourning with All About Rockets - An Interview 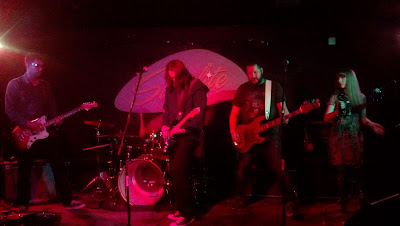 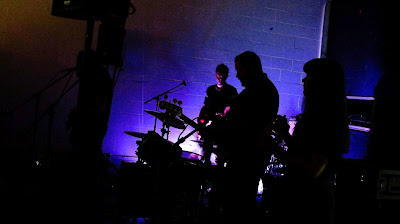 Q: When did All About Rockets start? Tell us about your history.
John: I think we started around three or four years ago. Our history... well, I married Joe's sister. Then when he moved back here from Utah he said, hey, let's start a band. And I said, that sounds cool.

Joe: And we did. I'd had the idea in my head for this band, and I'd had a few aborted attempts to make it work prior to saying, hey, why not do this with John? And then finally we got together, and it worked. We've gone through a couple of lineups so far, but...

Q: Who are your influences?
John: The usual suspects. I mean, we're pretty big into the original shoegazer stuff... My Bloody Valentine, Slowdive, Ride, Lush, Swervedriver, all that. And then we like some of the new stuff too. I'm big into The Warlocks. But everyone in the band has pretty eclectic tastes. I think it covers everything.

Joe: We have some very differing opinions on music in this band, that's for sure. I do like a lot of the '90s college rock/indie rock stuff, though.

John: We're influenced by a whole bunch of stuff, but I think most of what pertains to the band is from the '90s.

Q: Make a list of your top 5 albums of all time.
John:
The Beatles – Magical Mystery Tour
Velvet Underground & Nico
The Cult – Love
My Bloody Valentine – Loveless
The Verve – A Storm in Heaven

Joe:
Cat Stevens – Tea for the Tillerman
John Denver – Back Home Again
The Beatles – Revolver
They Might Be Giants – Flood
Sonic Youth – Dirty

Q: How do you feel about playing live?
John: It always sounds like a great idea until about five minutes before I go on stage, and then I want to have a panic attack. Sometimes it's great and I have a lot of fun, and sometimes I'm just glad when it's over.

Joe: I have a lot of nervous energy. I love playing live, and once we get up there I'm like, alright, I'm comfortable. But making sure that everything is where it's supposed to be before we get on stage, and that all the gear is there and everything is working, that's where I get really stressed out.


Q: How would you describe All About Rockets' sound?
John: That's a tough one... I think that's something for someone else to say. I don't like trying to describe what we sound like.

Joe: I think it's nontraditional shoegaze. We've got some pop, some noise rock, and some psychedelic influence. And, at least in my reading of things, there's a lot of soul in there.

Q: Tell us about the process of recording your songs.
John: Oh, man... trial, and error, and DIY. We're definitely hoping to do something more recording-wise, but the three songs we recorded were a bit of a mess. I mean, we threw a bunch of mics on our gear in the middle of a garage and tried to learn how to record songs by ourselves.

Kyle: Lots of overdubs were put down and blended in to build on what we recorded at first.

John: The three that we put on Soundcloud are the three that turned out the best, and then there's some that didn't turn out so good that no one will ever hear. But we've learned a lot, and the next time it'll be much better.

Q: Which new bands would you recommend?
Joe: Tender Age. We played with them recently. I really, really love everything they've done.

Kyle: I think one of the coolest, newish bands out there is Flavor Crystals.

Joe: We just listened to the new Flavor Crystals record and it was really good. They're a band I don't have a lot of experience with, but I liked it a lot.

Q: Which bands would you love to make a cover version of?
John: I’m terrible at doing covers.

Kyle: I'd like to cover “Jenny's Theme” by Folk Implosion.

John: The Misfits... we want to do a shoegaze version of the Misfits.

Joe: I think “Where Eagles Dare” would be a really fun song to cover.

John: I wanna do “Die, Die My Darling” with just noise. Or “London Dungeon” all slowed down and sludgy.

Joe: Or to go with the theme of the band... “I Turned Into a Martian.”

Q: What's your plan for the future?
John: To try and record an album, or at least an EP or something, and maybe play some more shows out of town.

Joe: Yeah, we want to try and get something recorded and pressed, and then go out and make noise elsewhere.

Q: Any parting words?
John: Just that Sacramento has a bunch more really good bands right now that have either just released new material or will soon... Soft Science, Desario, ghostplay, Electro Group, Fleeting Joys. People should check them out.
*
*
*
Thanks