Winching The Night Away with Elemental Gaze - An Interview 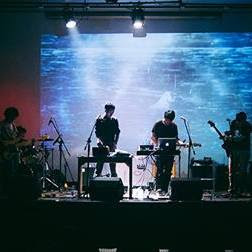 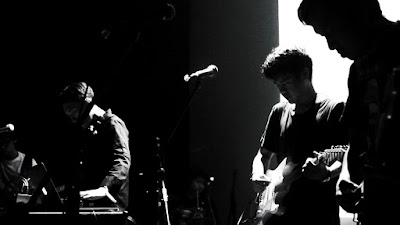 Q1: When did EG start? Tell us about the history
Our journey began when Fuad and Myrdal was in the end of their high school years. It was in the end of 2004 when Fuad started to exploring music with Fruity Loops and Myrdal loved to create short-video or short-movie. The idea of the band was started when Fuad asked to Myrdal about to create a musical project with a distinction, particularly in the performance. Then they were agreed to make a musical performance and combined it with a visual representation taken from EG's songs (the early songs of Elemental Gaze was writen by Fuad and Myrdal). As the time goes by, the band was known in their community (high school) then In 2005-2006 EG started to perform in several gigs in their hometown (Bandung). In 2006 EG released their first e.p. titled 'We Cannot Create Ourselves For Someone We Love' by themselves. Unfortunately, in the same of year, Myrdal decided to left the band, but not for long, by a coincidence Fuad met Luthfi (guitar player) and asked him about to join the band. Fuad and Luthfi ran the band nicely, they were also known as the duo Elemental Gaze, before Bilan (loops and sampler player) which also known as Fuad's high school friend joined EG a couple months later and made it a solid formation as a trio for about 8 years. Start from 2014, EG helped by Asa Sabu (drum) and Adyt (bass) as an additional player in order to enrich EG's sound quality and performance.

EG released the first album in 2008, titled 'Let Me Erase You' (with Xtal records Japan http://www.xtalrecords.jp/artistspage/ELEMENTALGAZE.html). Now, we have 2 albums already, our latest one has been released last week (14 Aug), this new album titled Elemental (2015, Sorge Records https://instagram.com/sorgerecords/).

Q4: How do you feel playing live?

Actually we could say that we rarely playing live because each of us stays at different cities. Absolutely, when we got to perform, as a human being we feel nervous right before take a stage, it's quite a strange when you are a common people, working as an employee, studying as a student doing as people do for living suddenly have to face lots of eyes stare at you at the same time Emoticon grin. Actually we would love to play in a little venue, with no big stage, it feels warm and yes we much comfortable with that circumstances. Oh.. ya, we are also considered about the quality of sound, because it will bring an impact to our mood and performance. After all gone well.. It feels like times flies, its the sign that we are enjoyed our performance.


Q5: How do you describe EG sounds?
Basically it sounds atmospheric, it’s good to accompany you when you are in a journey, or travelling, or wandering something. We like to quote Paul Agusta (in his review in Jakarta Post) words about EG because his comment represent EG sounds:It is a sound born in the deepest reaches of the human heart and mind; the dark little space in the back of our heads where grief, loneliness, confusion, and unrequited desires are processed. It is the sound of a sorrowful soul in the midst of healing itself. Their sound takes off from a rather dark place, but will almost always progress into a brighter place before finally ending.

Q6: Tell us about the process of recording songs?
It began with an instrumental song wrote in Fruity Loops software. Fuad creates most of the song, but there are also songs that writen by Bilan and Luthfi. Bilan and Fuad usually do the editing, remixing and exploring the sounds from the software. After that, we send the edited song to Luthfi then he added guitar parts before its come up as a completed song. We do the part separately each other and meet again when we are in preparation for the gigs. That’s the basic. But in the making of our second album, we did a recording in a studio (Tattva Studio in Bandung city). First we finish all the sampling stuff (from FruityLoops), then we recorded some drum parts and bass, after those process done, Luthfi took his guitar parts, and then we took some vocals and other instruments (in our second album we also added sound taken from cello and trumpet). It takes 2 years for recording the second album, quite long because we rarely meet due to each of member have their own activity and priority. We only meet at the weekend, maybe once in every 2 months.

Q8: Which band would you love to make a cover version of?
Cocteau Twins… and maybe Astrud Gilberto

Q9: What are your plans for the future?
Just writing music and record new songs.. and let it flows..

Q10: any parting words?
Keep the good works and sounding more cool music/bands to the world
*
*
*
Thanks