Endless with White Cascade - An Interview 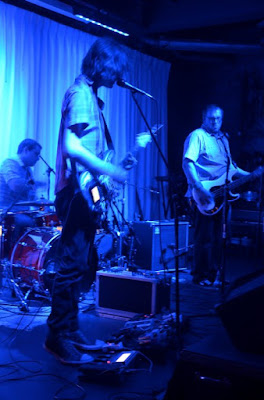 Q. When did The White Cascade start? tell us about the history...
Cash - The group that would become White Cascade was formed in the Spring of 2008, a year that would ultimately become a milestone for us and the rest of the world. A man of ill-mind named Joshua Young put out a Craigslist ad looking for like-minded people to inhale head cleaner with and discuss obscure Pavement songs (Guess note: I remember this ad as containing a single picture of slowdive with no caption.

This group was called The Huxtables and we played at Robbins’s house for a short amount of time, until Joshua was forced to go to Oregon to answer for his horribleness and he left North Carolina for good, we’ve heard. This is the true birth of White Cascade, this is when Guess decided he would let us all in on his life-secret and we made a vow to expand sonic realms together, forever.

Q. How do you feel playing live?

Guess -- Usually wary of a gear malfunction, or missing a pedal cue.

Q. How do you describe The White Cascade sounds?
Cash – Shitty alien sounds.


Q: Tell us about the process of recording the songs?
Cash – We often track ourselves. We’ve recorded about 80% of our rehearsals over the past 7 years. Sound engineering is integral to what White Cascade is all about. In the past we tracked live, but have since primarily tracked individually, mainly due to scheduling and room availability. On Endless, we went to Pershing Hill (Greg Elkins) and Seriously Adequate (Alex Maiolo) for some of the tracking, with the remainder done in our homes or at the rehearsal space. I was fortunate enough to track most of my bass parts with Titan and Sons (Allen Palmer) and was able to use some of the tools he was privy to at the time, including a REDDI which I really loved.

We mixed Endless at Uniform Recording with Jeff Zeigler. We spent a week with him at his studio in Philadelphia and mixed the album together. It took some back and forth after the session to get the mix where we wanted it, which had a lot to do with how we tracked our instruments and a little to do with the fact that Zeigler is a workaholic and maybe had too much on his plate at the time. Or we were destroying his ears, unsure. Zeigler suggested we go to Heba Kadry at Timeless Mastering, which was a great fucking idea. Heba is one of those rare people that have the gift of just being on it, all the time. We told her what we were looking for and she just nailed it.

Guess -- Our motto is to record ourselves as often as possible. Even just normal practices. You never know when an idea is gonna pop up that sticks and everyone agrees on. Or that random Avalyn cover that just happens to work out right. Sometimes when you are in a rut you just have to swap out instruments with another Matt, even if you don’t know how to play it, or grab a new fx pedal out of the box of goodies and give it a whirl. For me, unfamiliarity with a sound or instrument simply forces your hand to experiment and that leads to new ideas, often good ideas. That is why we appreciate constantly evolving in our sounds and exploring new sonic territory.

Q. Which new bands do you recommended?
Cash - We met Wildhoney the other day, they are rad. Our friends Wool are great, and they have a new album out that Allen Palmer engineered.

Guess -- Bloody Knives is my fav. Andre Obin. Glish too. Neither of those are new per se, but they might be new to somebody. Jenny Besetzt from our local music scene has a great Cure influence. And while Mitch Murder isn’t a band but rather a swedish synth pop genius producer that never ceases to amaze me, I always have to mention him.

Q: Which band would you love to made a cover version of?
Cash – We actually played Avalyn last night at practice, we’ve done that before at shows for fun. I’ve always wanted to play in a Tears For Fears cover band, but that is a ridiculous dream that will never happen.

Guess -- Cocteau Twins, Slowdive, a few Whirr songs. We’ve done Souvlaki Space Station a few times and it got crazy, we even nailed the dub ending on that song. I’ve noodled over some Pygmalion loops before, but I don’t know if the guys recognized it because they never join in. I’m a big fan of Failure at the moment. I could see us doing a full Failure set at some point.

Q: What are your plans for the future....
Cash – Record music and play it on the road. Continue to push sonic boundaries for the rest of our lives. I’m talking old as fuck, with a walker, I’m still gonna have my bass rig and I’m still going to turn it up loud as fuck.

Guess -- To continue to progress as a band and to change while exploring new sonic territory. Endless may be 4 years in the making, but we first hit on some of these song ideas starting back in 2008, even at our first show. We have new material and are ready to go into the studio and start recording some new stuff, which is turning out to be more 90’s grunge and overall “American” sounding. Some powerful 90s rock. One of the new songs turned into a 311 beat last week at practice, but it is still shoegazey as fuck. That may sound silly but we are totally serious. I think we all loved it when that happened, right guys? As for the immediate future, I’d like continue to play a lot of the Endless tunes live as we promote the record, while fully embracing this opportunity for new inspiration. We have a bunch of synthesizers set up in the practice space/studio ready to go at any time. I’m sure they will be used in some way on future material.

Guess -- Renato, thanks for taking the time to interview us, and thanks for all that you do to support the shoegaze community and underground music. Your blog is the real deal. We hope to continue to be able to record and release White Cascade music and share it with you in the future!
*
*
*
Thanks