Heart Fake with Echo Is Your Love - An Interview 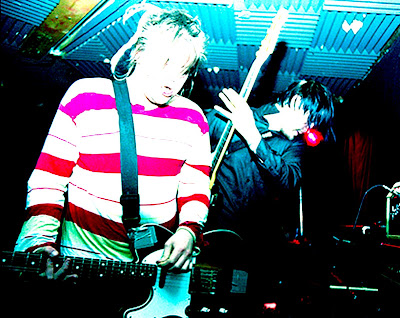 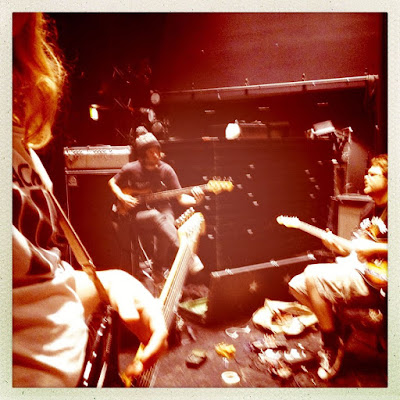 Q. When did Echo is Your Love start? Tell us about the history...
The band started already in spring 1998. The line-up was me Mikko (guitar + voc), my girlfriend/current wife Nea (voc) and Ilai (gtr) + Vellu (bass, he also sings in the hardcore band Hero Dishonest in which I play the guitar) and Tommi (drums). Later Vellu and Tommi changed to Antti (bass) and Riku (drums). We first released a bunch of 7”s of mostly improvised, droney noise-pop with barely any song structures. Later when we started touring we got bored with this jamming kind of approach and started writing real songs and moved towards noise-rock and pop structures. In early 2000s we put out an album every two years and did some tours in Europe. In recent years the band hasn’t been too active due to family stuff (there are 8 kids in the band now..) but we’re getting more active at the moment, finishing our new 7” which will be our first release since our 2010 album. Feels almost like a new start.. On the last couple albums (Humansize, 2006 and Heart Fake, 2010) our music was pretty ”radio friendly pop” but seems like we’re moving back to louder, angrier, punkier approach..

Q: Who are your influences?
I would say the very obvious Sonic Youth and Velvet Underground, The Ex, The Fall, Unwound.. Kraftwerk have always influenced me a lot. I love repetition, that’s where Kraftwerk and The Fall come in. Joy Division, too, of course.

Q. Make a list of 5 albuns of all time…
My personal favorites would probably be different every day, but I guess I could listen to these any day:
Sonic Youth – Goo,
Kraftwerk – Man-Machine,
Velvet Underground & Nico,
Radiopuhelimet – Jäämeri (Finnish noiserock band since 1986 who are now on my label.. https://www.youtube.com/watch?v=taZx3VS7NDI) and the 5th.. Too difficult to name. I’m not really a fan of albums. I could list you 100 songs or bands/artists that are bigger than life but I probably didn’t care too much about any of their albums. Of course, Reign In Blood by Slayer is pretty much the best thing ever. Antti our bassist names Topi Sorsakoski & The Agents : In Beat as the best record ever, and I guess I could agree. (https://www.youtube.com/watch?v=SAxasy1oqew&list=PLXINGrkstamiQJva1KDExqkpwrIO4w_s-)

Q. How do you feel playing live?
That’s why we do this. I don’t know how the audience feels but I’d like to think there’s some kind of special connection between the audience and the band at our shows.. At least we try to be as sincere and close to the crowd as possible.

Q. How do you describe Echo is Your Love sounds?
Loud pop music.


Q: Tell us about the process of recording the songs ?
We used to record fast, usually the basic tracks over a weekend and the vocals the next weekend or something like that. Lately the recording process has taken years.. We started recording our latest songs already a couple years ago but havent’ been able to finish the vocals. We just recorded the vocals for two new songs which will come out on a 7” in early 2016. Since me and our singer have kids it’s almost impossible to find time for our musical projects.

Q. Which new bands do you recommended?
A bunch of Finnish bands.. I don’t really follow any foreign new music. I don’t have the time and there’s enough good new music in Finland. I would say check out Fate Vs Free Willy, Lokit, Pigeon Hunt, Ghost World, Moderni Elämä, Grateful Däd, all from Finland.

Q: Which band would you love to made a cover version of?
Us covering someone else? I would love to cover something by Fleetwood Mac.

Q: Whatt are your plans for the future?
New 7” in early 2016, some shows in Finland, hopefully outside of Finland, too. Finishing the new album hopefully in 2016.

Q: Any parting words?
Cheers man Would love to play in Brazil some day!
*
*
*