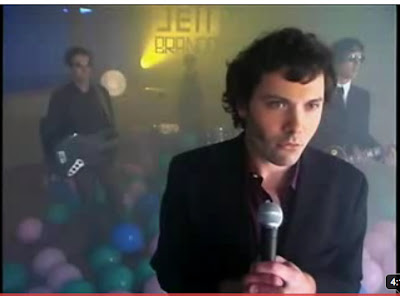 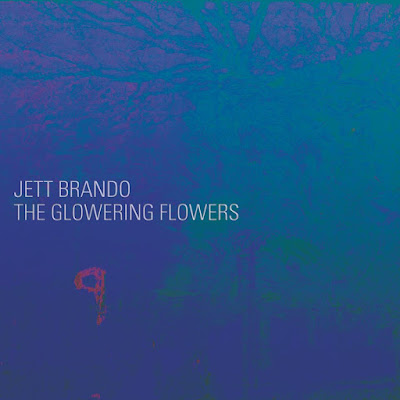 Q. When did The Glowering Flowers start? Tell us about the history...
A: I had recorded with Will Brooks of dälek over the years from around 1998 to 2005. He was around during the later sessions for my old band, All Natural Lemon & Lime Flavors, when we recorded Turning Into Small (Gern Blandsten 1998) at Sweetwood Sound Recording in Parsippany, NJ. He then invited me to record on some dälek side-project recordings, then actual dälek sessions, and then after All Natural Lemon & Lime Flavors broke-up, he asked if I wanted to record some new Jett Brando material at his home studio. We did that and some of those songs ended up on Jagged Junktion (Go Kart Records, 2002), and eventually Embargo (Thornhill Records, 2012). After a lengthy hiatus of about 8 years during which Will and I did not record anything, we finally reconvened and began recording again in 2013. After being inactive for a while, I wanted to do something kind of quick, simple, and mostly acoustic. We recorded the Landing EP that October and I released it on my own digital-only (for now) label, Thornhill Records, soon after. There was one song that we had left over that didn’t fit with the others, and that was “Sunshine.” We held on to that one for the next sessions. So, although we didn’t begin in earnest until a few months later, that’s really when these sessions started, around October of 2013.

Q: Who are your influences?
A: As far as mostly guitar-based music goes: The Beatles, My Bloody Valentine, Pavement, The Velvet Underground, Radiohead, The Monkees, and Pixies. I’ve also been influenced by Cole Porter, Fats Waller, Hoagy Carmichael, Ellington/Strayhorn, Gershwin, Rogers/Hart/Hammerstein, Mancini, Jobim, and other writers of the classic “songbooks.” Sinatra and Sarah Vaughan are two of my favorite vocalists of all-time.

Q. How do you feel playing live?
A: I like playing live a lot. I just don’t do it often enough. This is mostly because I don’t have a regular “band.” I do shows both solo and with a band, but I need to get there to do more of both. The solo shows are fun because I can go off on little improvisational tangents without worrying who can follow along. Overall, I prefer the live performances, whether solo or with a full band, to be more raw than the recordings.

Q. How do you describe The Glowering Flower‘s sounds?
I would describe it as psychedelic and shoegaze-influenced ambient pop and rock. I consider pretty much everything I do to be “pop” in one way or another, but with these other influences creeping in. Obviously, Will’s production and collaboration play a huge role in the songs themselves and the overall sound. We’re both different versions of “perfectionists.” He helps keep me grounded and leans more toward holding on to little moments that keep the vibe a bit more raw. Like, the lead vocal we kept and used for the song, “Oh My,” on Landing. I wanted to do it over, but he said that the flaws in the take made it a perfect match for the lyrics.

Q: Tell us about the process of recording the songs?
A: Sometime early in 2014, Will broke his ankle and had to stay at home for a few weeks. On his own, he came up with these great short guitar and keyboard riffs that formed the basis of what became four new tracks. They were small samples of little demo ideas he had. And it was sort of new to him because he hasn’t had any training on guitar or keyboard. And those were the other four songs from The Glowering Flowers. It took a while to finish, mostly because it was hard to find time when we were both free, but also because it’s not always easy for me to write songs based around something I’m given, as opposed to something I start writing myself. I can come up guitar parts, but it felt like the vocals and lyrics took me forever. Everything Will & I have done has been a collaboration, but this is the first time we’ve done songs with this approach, with his initial parts that he both wrote and played remaining in the final version. There was something nicely lo-fi about this parts and I thought they should stay in. I’m not sure if he originally thought that I would just replay all of his parts. For a lot of them I did, but we kept his in anyway because I liked the sound and texture. Plus, you run the risk of everything sounding too similar when you play all the parts, which I’ve done on a lot of my more recent recordings.

Q. Which new bands do you recommended?
A: I’m bad about keeping current, so I rely on friends to send me links with newer bands or songs. I do like the Canadian band Alvvays, who I saw them open for The Decemberists. I enjoyed their set and I like their debut album a lot. I like Tame Impala. I also like Parquet Courts, although I must admit that I only heard of them in 2014 when I saw them on David Letterman. And of course, St. Vincent. But I’m more likely to stumble across something older, like Emitt Rhodes, and get really into listening to that for a while.

Q: Which band would you love to make a cover version of?
A: And I’m always keen on the idea of doing classic old songs like, “Night and Day,” but we’d have to do it right, or it will come across horribly. I’d like to record them sparsely and keep it a bit dreamy and ethereal. I’m also interested in doing a couple of R&B songs from the early ‘60s; some dreamier songs from the Motown stable.

Q: What´s the plans for future....
A: We already have some “blue prints” ready for the next batch of songs. We’ve released two 5-song EPs within the last two years, so I’d like to put out a proper full-length in 2016. It’ll be like an elaboration of The Glowering Flowers, but with some more straight-forward mid-late ‘60s psych pop influences. Some songs may sound like they could have been done by All Natural Lemon & Lime Flavors, had we stuck together, so there will definitely be some more shoegaze sounds in there. I have some demos I’ve made. Will & I plan to continue with everything in the near future, after he’s done with some upcoming dälek shows and recordings.

Q: Any parting words?
A: Thanks for listening! I’m very glad that both All Natural Lemon & Lime Flavors and dälek continue to have a following all over. We’ll be busy, so keep your eyes out for the new material, and I hope to play live in your area at some point.
*
*
*
Thanks