Random Transmissions with The Dharma Violets - An Interview 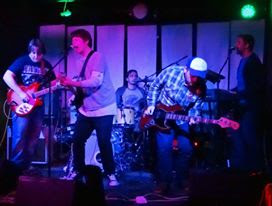 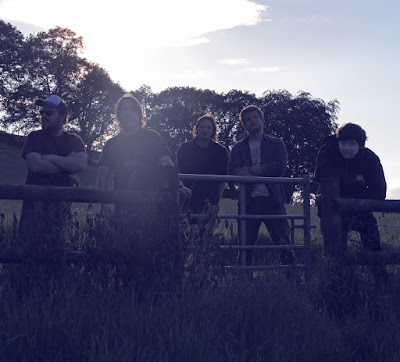 Q. When did The Dharma Violets start? Tell us about the history...
The history goes back a bit by now as Nathan, Stu and Alun played together in Welsh Psychedelic Rock band Khagool about 10 years ago but the current incarnation started in about 2011, when Stu and Alun started a fresh project together, put an advert up for a singer and Nathan replied by chance, after years of being out of contact. Tobias soon joined on drums and John joined a little while later on keys. We played a couple of gigs, Cardiff Psych Fest ’14 and another supporting The Octopus Project on their performance in Cardiff, and set off for the hills to record soon after. We released our first album ‘Random Transmissions” August 2015 and have a number of gigs lined up in the coming months.

Q: Who are your influences?
Our influences are wide, and we all have our own influences that means we all bring something to the table. Nathan loves everything from Pink Floyd, Flaming Lips, Mercury Rev, Bowie and more, while Alun loves The Rolling Stones, The Brian Jonestown Massacre, Spacemen 3, The Dandy Warhols etc. Stu brings in a very unique style of bass playing drawing inspiration from Yo La Tengo, Super Furry Animals, Gorky’s Zygotic Mynci and all sorts of eclectic bands, Tobias drums with a strong Dave Grohl, Queens of the Stone Age and hard rock influence, and John is influenced by the Beatles, Radiohead, Muse, Boards of Canada and Massive Attack, so we all bring in a different flavor.

Q. Make a list of 5 albums of all time…
Nathan –Pink Floyd animals album no other album has topped it since I first heard it. Roger Waters’ angst Laden lyrics with David Gilmour's stunning tones. Amazing album - mad to think that they weren't happy with it. Only 5 songs on there too..

Alun – Mine would have to be Exile on Main Street, just the pure indie attitude of the DIY ethos, the wide musical palette and the feel of the whole thing.

Stu – Caribou, Up in Flames. Take some swirling Vocals, harmonies and guitars, add two tablespoons of glockenspiel and vintage keys, a dash of samplers and mix with two booming drum kits fighting it out.

Tobias – Foo Fighters’ debut album – All Grohl, I just love the spirit of it, making music for the love of it, and the inspiration that just one guy could write, play and record a whole record. Genius...

Q. How do you feel playing live?
Always a pleasure to play live, the biggest buzz for any musician I think. Probably why we do it..!

Q. How do you describe The Dharma Violets sounds?
Hmmm. It’s a pretty standard rock band setup – drums, guitars and bass but overlaid with synths, drones, sounds and textures and a rich vocal sound, harmonies and so on. On our album we tried to remain faithful to our live sound, recording together and then overdubbing over this live core so that the core is us playing together. I think the lyrics are also an important part of our songwriting, giving the listener something to think about and trying to connect, I guess. But yeah, swirly, jangly, psych rock - that sort of thing..

Q: Tell us about the process of recording the songs?
To record ‘Random Transmissions’ we invested in a mobile studio and set out to the Welsh hills, where we hired a barn for 10 days - sort of inspired by Led Zeppelin at Bron yr Aur crossed with the Making of Exile on Main Street – this meant we had a whole valley to ourselves where we could make all the noise we wanted without disturbing anyone. We returned to Cardiff with 12 tracks of drums and guitars, and spent the next 10 months adding layers – tanpuras, electric sitar, orchestral gong, Tibetan singing bowls, pianos, organs, synths, more guitar layers, reworking some vocals, and adding sounds and effects. We had a trumpet player in on ‘High Resolution’ and ‘Take a Look from the Inside’. We mixed it ourselves and then took it to be mastered at Hafod Mastering where Gethin John did a great job at bringing it all out.

Q. Which new bands do you recommended?
There is quite a lot happening on the Welsh scene at the moment – Hippies vs Ghosts are doing interesting things, and Swansea band Soundwire really rock with a Spiritualized-like sound that is really cool. HMS Morris too, as well as the highly acclaimed Gwenno album which breaks new ground for Welsh music in many ways. Also, we were in Spillers Records the other day and had to buy the new Vinyl Williams album that was playing in-store – what a sound…

Q: Which band would you love to make a cover version of?
Interesting that you ask as we’ve been invited by Welsh Lo-Fi musician Pulco to play a cover of a Gorky’s Zygotig Mynci song for an album celebrating the band’s place in Welsh musical history. We chose to cover “Hush the Warmth” from the Gorky 5 album which we will be recording during the first sessions for our second album. Keep your eyes peeled for this project as it is a great idea which should yield some gems.

Q: What are your plans for the future?
Getting out there and playing our songs to people, more than anything. We have a number of gigs lined up in the next few months and look forward to these – our first in over a year. We are currently half way into writing our next album also – about 6-8 songs in, which we will begin recording this autumn. Very excited about this - it’s always a great feeling to hear new tunes coming through.

Q: Any parting words?
A huge thank you for asking us to partake in your blog, and for taking the time to listen to our music. Keep on keeping on..
*
*
*
Thanks