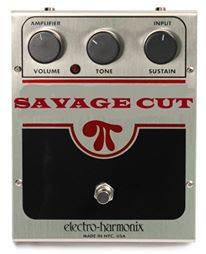 Q. When did Savage Cut started, tell us about the history...
Q1. Savage Cut started in April 2015. Brian Keirnan and I were put in touch by a mutual friend from the band Buzzbomb. We didn't have a drummer, so my youngest son Liam offered to come down and jam on the drums. Within 2 hours, we had the bones of 2 or 3 really strong songs, and Liam really enjoyed it, so volunteered to stick around. We asked Gaz Davis a week or so later if he would like to come down and add some guitar, and he joined up! We weren't in a hurry to find a singer and the idea of using samples and guest vocalists came fairly early on. Custom Made Music picked the first two tracks up almost immediately and luckily for us released them on a cassette single that is now sold out. (Check out their site for some brilliant music www.custommademusicva.com )

Q: Who are your influences?
Q2. Our influences are very wide and varied. Mogwai, Nirvana, Killing Joke, and The Fall would be a good mix, but nothing is ruled out- if we came up with a jazz hook that we liked, then it would be in.

Q. Make a list of 5 albums of all time…
Q.3 my top 5 changes all the time, like most people's!
1. Wish You Were Here by Pink Floyd
2. Nevermind by Nirvana
3. Young Team by Mogwai
4. Hail to The Thief by Radiohead
5. Rubber Soul by the Beatles

Q. How do you feel playing live?
Q4. We all just love playing. Gaz hasn't played live yet, but we are planning some shows later this year. Playing live with our previous bands was always great.

Q. How do you describe Savage Cut sounds?
Q5. Our sound is obviously guitar based, heavy bass lines with Gaz playing and riffing while Brian does his thing on lead. Liam hits the drums like they deserve to be beaten to death. We are trying to make things different, sometimes using samples, some pure instrumentals and others with guest vocalists - local rapper/mc Hextasy is working on a track that we are recording later this month.


Q: Tell us about the process of recording the songs?
Q6. We record at Live Rehearsals, a local studio, with Robin Young, in our opinion a top engineer/producer, who gives a drum sound like no other in Scotland. Again, we try to keep it simple - purity and honesty come through if you really mean it.

Q. Which new bands do you recommended
Q7. There are so many great new bands from Scotland. Baby Strange, Paper Beats Rock, Tommy Concrete and the Werewolves, Ultimate Primate Disaster are my personal favourites

Q: Which bands would you love to make a cover version of?
Q8. I have never been very keen on covering other people's work, but a version in our own style of a Classic Motown tune would be interesting, but we have too many ideas of our own to worry about that yet!

Q: What are your plans for the future?
Q9. Future plans are to carry on writing and getting a few shows under our belt. We plan to release a few track at a time rather than the 'album' route, not to say that we won't compile a record at some point if the demand is there. Meanwhile, all of our music will be available free on bandcamp and reverbnation.

Q: Any parting words?
Q10. Thankyou so much for taking an interest in the group, keep up to date with news and free downloads on our facebook page! Love from Scotland!
John, Liam, Brian and Gaz
*
*
*
Thanks