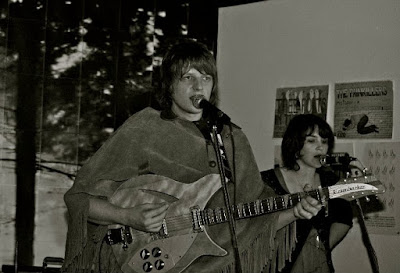 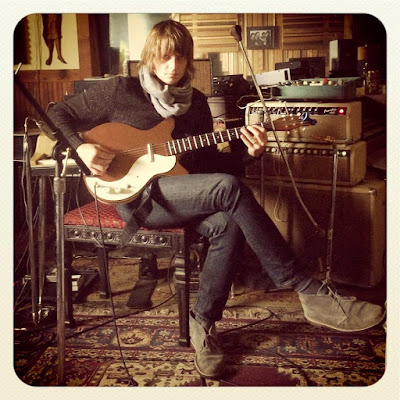 Q. When did Hunter Lea start? tell us about the history…
Well, I’m Hunter Lea. Music has always been present in my life. My dad is a drummer and a former radio DJ, so as a kid I got to fool around on his 1966 Ludwig Champagne Sparkle drums and peruse his huge vinyl collection. It just seemed natural for me to get into music. My first instrument was drums, but I never became a great drummer. My dad bought me a drum set the first day of summer after seventh grade, but that summer an amazing drummer named Dash moved into my parent’s neighborhood, so I decided to learn guitar and write songs. Dash and I found a bass player in Junior High named Alan Kropf, the three of us formed a group called Circa. I was very inspired by 1960s Vox organ drenched garage rock and that was the type of music I was trying to make with that band. Our old website is still up. www.circa.8m.com. After that band fizzled out I met Charles Perales and Jordan Luckman, we formed the band Mono in VCF. I had gotten my first synthesizer - a Moog Opus 3 from a lady my dad worked with and that keyboard really inspired the sound of Mono in VCF. That band with Charles singing got a demo deal to record and shop songs to Sony Records; but we fought like brothers and broke up while recording for that deal. Jordan and I decided to continue on with the Mono in VCF name and found singer Kim Miller. The band sounded completely different. The Charles Mono in VCF was very synthesizer heavy 1980s New Wave sound (more his sound than mine), the band with Kim is more like a haunted 1960s keyboard heavy orchestral sound. Around this time I had befriended the film director Allison Anders and we were trading mix CDs a lot. She turned me onto some bands that really influenced my music; The Millennium and The Poppy Family. I had also found Lee Hazlewood, Scott Walker, Serge Gainsbourg and David Axelrod. I was trying to write and put together the Mono in VCF album at a house in Tacoma that half the band lived it. It was around this time I found out I had cancer. I didn’t know what would happen, but one of the first calls I made was to record producer Martin Feveyear (we had met him through Sony thing). I told him I had cancer and didn’t know what would happen, but I wanted to make an album before I died. So we booked the studio time and hoped for the best. I went through chemotherapy and beat cancer. The week after I got done with chemotherapy, Mono in VCF opened for Jarvis Cocker in Seattle and a week after that we were recording with Martin in the studio. It was a great way to recover, music heals! We spent about 8 weeks in the studio with Martin recording Mono In VCF I album, it’s something I’m very proud of. We had found Terry Jacks' (Poppy Family leader and “Seasons in the Sun” singer) phone number and asked him to help us with our album. We went and met him in Vancouver and he became our mentor. He helped us with some arrangements and sang on a few tracks on the Mono album, it was truly mind-blowing for me. The Mono in VCF record was picked up by a bunch of press and blogs, there was a lot of positive momentum happening then. It was also being played a bunch by the Seattle/online radio station KEXP. We felt like our band was really going to “make it,” but a record deal never came through and the band disintegrated about a year after we put our album out. Since then I’ve been writing songs, making film music, producing artists, curating the Light in the Attic Lee Hazlewood reissue series and I’m running a recording studio with my friend Rick in Tacoma; Uptone Recorders.

Q: Who are your influences?
Above all my favorite band is the Beatles. They have been an endless source of inspiration to my songwriting, recording technique and choice of instruments. That being said - I love all types and eras of music, though one of my favorites is 1966-1969 psychedelic pop. I’m very inspired by Curt Boettcher/Millenium, The Poppy Family/Terry Jacks, Byrds/Gene Clark, Syd Barrett, Serge Gainsbourg, Scott Walker, Phil Spector, Beach Boys/Brian Wilson, The Bee Gees and a zillion others. I’m also very influenced by German krautrock stuff like Neu, Can and Kraftwork & trippy soul stuff like psychedelic Temptations, Delfonics and Blue Magic.

Beatles - White Album (I love so many Beatles albums, but the white album has so much to offer; tons of tracks, so many styles and a crazy darkness that permeates the whole album. The Beatles at the peak of their powers!)
The Millennium - Begin
The Poppy Family - Which Way You Goin’ Billy?
The Byrds - Notorious Byrd Brothers
Love - Forever Changes
Zombies - Odyssey and Oracle
JK & Co - Suddenly One Summer
Scott Walker - 4
Serge Gainsbourg - Histoire De Melody
Nelson Lee Hazlewood - Cowboy in Sweden
Beach Boys - Pet Sounds

Q. How do you feel playing live?
I’ve had a great time playing live in the past, I just haven’t done it in about 5 years! I’ve been living in the recording studio and haven’t had a live band for awhile. Highlights of playing live were definitely playing the Bumbershoot Festival in Seattle with Mono in VCF and playing stylophone and omnichord with Mark Pickerel and Suzi Jane Hokom in Los Angeles.

Q. How do you describe Hunter Lea sounds?
I would describe it has haunting, spacey, melancholy, dreamy pop??? Keyboard heavy futuristic psychedelic pop??? It’s hard to describe my own work, it’s easier for outside ears to label it sometimes…


Q: Tell us about the process of recording the songs?
I record A LOT at home. Most recordings start as home demos and slowly morph into finished recordings. All songs happen differently. Sometimes a song comes together while playing acoustic guitar and singing, other times it’s a crazy Moog sound or drum machine beat that inspires a piece. Some recordings are just me at home playing everything, others are a full live studio band in a full on recordings studio. I love recording so much, whether it’s Pro Tools, a vintage tape machine or an iPhone! The possibilities are endless.

Q. Which new bands do you recommended?
I really like the new Tame Impala record Currents. Jacco Gardener is great, I would love to collaborate with him. I love his music and recording - get his records! The Soundcarriers are a killer group. I’m also a huge fan of Broadcast. I’m very sorry that Trish is gone too soon, but I’m looking forward to hearing their final album if it ever comes out. Check out my friends My Drunken Haze they are carrying the psych pop torch in Greece.

Q: Which band would you love to made a cover version of?
I mostly prefer trying to write original songs but I’ve covered the Terry Jacks/Poppy Family song “There’s No Blood In Bone,” the Lee Hazlewood song “Some Velvet Morning,” and a couple obscure Curt Boettcher productions “My Heart Cries Out” by the band Action Unlimited and “It’s A Sad World” by the Ballroom.

Q: What are your plans for the future….
More recording of course!! I have lots of records in the works currently. I’ve finished an album with my friend Andrew Sandoval, we have a group called The Low Humbles and our album is being pressed on vinyl right now. It’s a total 1967 trippy sunshine harmony pop thing. Also I’ve got a studio group with my wife Melinda called Moon Age, haunted girl vocals and dreamy space pop instruments. We’re working on an album and have done some recording with Suzi Jane Hokom and Brian Kehew in Los Angeles. I’m working on a record with my friend from Circa Alan Kropf; we’ve laid down some live studio group tracks with Mark Pickerel (who I consider to be one of the best drummers ever). I’m also working on a new solo record of Mark’s, he’s also a great singer and songwriter - check out his track “I Study Horses” and you’ll know what I mean. I’m helping my friend Charles Perales (the first Mono singer) with his new band Hugo Drax. Recording the Tacoma band The Painkillers. I’m planning on releasing some material under my own name as well, but I don’t consider myself a great vocalist so it’s hard for me to feel happy with the recordings of my own voice, but I’ve got about 10 albums worth of “solo” material recorded. On top of the new music I’m also working on reissues of old music. I’m still working on the Light in the Attic Lee Hazlewood series a bunch of my favorite Lee albums are going to be reissued over the next few years and also stuff he produced like the amazing Lynn Castle. A vinyl reissue of the Mono in VCF album is also being put together, I’m hoping for purple vinyl!

Q: Any parting words?
I think it’s a great time for music lovers. There is so much good music to be heard from the past and present. Humans are in the process via the internet of making all music ever available for everyone to listen to…that’s amazing!! Amidst the sea of awesome music you’ve taken the time to find me and listen to my music and my story. Thank you very much for that!
*
*
*
Thanks