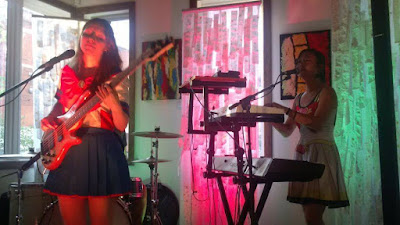 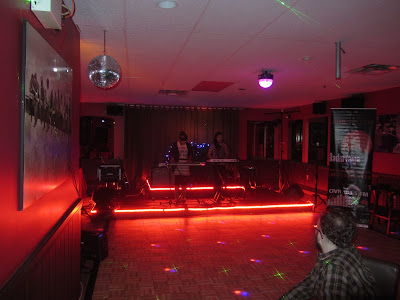 Q. When did Scary Bear Soundtrack start? Tell us about the history...
I (Gloria) started the band in 2010 as an indie band in Ottawa, the capital city of Canada. The music project has relocated a few times since, including Windhoek, Namibia in southern Africa, and the Canadian Arctic community of Cambridge Bay, Nunavut, where Scary Bear Soundtrack was based for the last few years as possibly the northernmost indie synth pop band in the world. Now the band's back in Ottawa.

Q: Who are your influences?
A whole grab bag of musicians including Radiohead, Sigur Ros, Teen Daze, Washed Out, Cocteau Twins, Stars, Tegan and Sara, Letting Up Despite Great Faults, and Memory Tapes. Most recently I've been really feeling the xx, CHVRCHES, Ringo Deathstarr, Braids, Austra, and Grimes

Q. Make a list of 5 albums of all time…
This is way too hard! But here are some albums that I find myself going back to over and over again:
Radiohead - OK Computer
Teen Daze - My Bedroom Floor
Sigur Ros - ()
Tegan & Sara - So Jealous
Washed Out - Paracosm

Q. How do you feel playing live?
It can be a challenge to accurately reproduce our recordings in a live setting, but it's fun making it happen. Although I love the process of creating music, live performance allow us to see our listeners reacting to our music, and that interaction means so much to us.Scary An indie dream pop project blending layers of shoe gaze with synth pop.


Q: Tell us about the process of recording the album?
Our newest EP Ovayok Road was recorded entirely in the bedroom of my house in the remote Canadian Arctic community of Cambridge Bay, Nunavut. The album is all about life in the Arctic. It wasn't an easy process in a community with no recording studios, music stores, or live music venues, so it was a very do-it-yourself project. We taped up broken microphone stands with duct tape, stretched nylon pantyhose over bent coat hangers to create microphone wind socks, and emailed tracks back and forth. Once we finished recording it, we emailed it to Ben Leggett in North Bay, Ontario to mix it, and had it mastered by Julian Marrs in Vancouver, British Columbia. It was a very cross-Canada project!

Q: Which bands would you love to make a cover version of?
We recently performed a synth dance cover of "Do You Want To Build A Snowman" from the movie Frozen, which was very popular among little girls.

Q: What are your plans for the future?
We're working on a music video for our single Fault Lines with filmmaker Mailyne Briggs and also featuring work by Mason Greenley, which we're planning to release in October 2015. I'm also working on some solo experimental music projects (https://gloriaguns.wordpress.com/).

Q: Any parting words?
Check out our new album Ovayok Road (https://scarybearsoundtrack.bandcamp.com/album/ovayok-road-2), written and recorded entirely in the Canadian Arctic, and featuring music about life in the Arctic.
*
*
*
Thanks