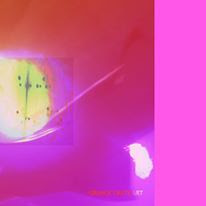 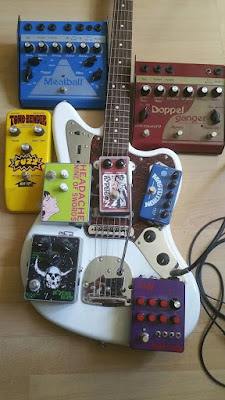 Q. When did Orange Crate Art start? Tell us about the history...
Well, the first album, which remains unreleased like most OCA stuff, was recorded in 1995. It was mostly ambient noise recorded on a four-track. There was another album that I recorded in 1996-97 that is more songbased that I will eventually go back to and finish. I don't remember exactly how many albums I've done since but there are four or five that will definitely be finished and released some day. Between 2003 and around 2008, I played live guitar in LKWRM, just enjoying not being in charge, making a lot of noise with other people, and so on. We also rehearsed quite a bit as Orange Crate Art, playing my music, but nothing came of that, largely because the time wasn't right then to finish the recordings of the songs that we played. After that, I did the "Italian Futurism" album in 2009, which I actually put up on Bandcamp earlier this year. There are some minor things in those mixes that I have to go back and fix before it gets a vinyl release, but I really like it. We went to this art exhibition in Berlin about the Futurist movement in Italy, and the recordings I later made at home was influenced by it, although the music ended up having very little to do with Futurism... I guess it's more impressionistic than anything else! Around this time, I did a two song interpretation of Patrick Heron's painting "Horizontal Stripe" that will definitely come out one day. I've recorded a lot of stuff since, of which some has come out this year.

Q: Who are your influences?
At this point, pretty much anything, which is a boring answer, but... apart from a variety of music, I'm influenced by (mostly 20th century) art, particularly painting. I like a lot of film from the 1970s when there was so much good film music made, often to films that were... well, not as good as the music, like "Boom!", which is a terrible film but John Barry's soundtrack is amazing. I'm interested in ideas and theories, sometimes from entirely different disciplines to music, and how I can turn whatever it might be into OCA music. It's not really an intellectual approach as much as a way to be inspired, to go outside of whatever comfort zones I have. I like hanging out with people who have quite different opinions and ideas, anyway. As long as they support Malmö FF.

But in terms of musical influences, like my own music, I'm all over the place. I like a lot of Brazilian music (Milton Nascimento, Chico Buarque, Jorge Ben Jor, et al), all the German stuff from the Seventies, Los Angeles pop from the past (like any Jimmy Webb recording, really), Burt Bacharach, Beach Boys, a lot of film music by people like Michel Legrand, Piccioni, et al, minimalist composers like Steve Reich... just different things. In the mid-90s, I listened to Flying Saucer Attack, Seefeel, and a lot to early jungle/drumandbass. Still go back to some of that stuff sometimes.

Q. Make a list of 5 albums of all time…
That list would change every day... too many to mention, but, the five first records that come to mind tonight:

Can't say that any of these would be in my ultimate top five of all time, but I certainly listen to them more than the records that probably would make such a list ("Song Cycle" by Van Dyke Parks, "Loveless", "Screamadelica", and so on... not sure anybody could make better music than that).

Q. How do you feel playing live?
Would like to again, not sure when and if it will happen. But yeah, I have a few different ideas for the future. Locally, it might be more of a band thing, which is what I like more than anything else, but logistically and realistically, international gigs will probably be me alone or with another person. Unless OCA sell out the Budokan in Japan for a year straight. Then I might just employ somebody to play the cuica.

Q. How do you describe Orange Crate Art sounds?
I'm not really interested in definition in that sense. That's for other people to talk about... the image I have in my head is always geometrical shapes on top and around each other, but the contours are blurry instead of sharp/defined. Whenever people ask me that question and I give them that answer, they change the subject to something else, though!

Q: Tell us about the process of recording the album?
The new one? Well, "Exploding Head Syndrome" is out in September and wasn't even an album originally. It's an outgrowth of another album that I might actually go back and finish next year. As that album became more and more songbased, I realised that the other tracks would be worth putting out too. It's more a collection of different types of music that I've recorded in the last 2-3 years. Not very planned, just very spontaneous music. I tend to write more and more in a sort of rationally dislocated way. Not sure if "instant composition" is the right word but many of these songs from the album and EHS EPs were literally written as they were recorded. In real time, with very few later edits in terms of chords and structure. When the subconcious takes over, the chord changes go into entirely different directions. It's not really trancey music. I like music that's very upfront, but this approach tends to mix the blurry with the ordinary. In the past, most music was written on the guitar, half-watching a film and half-playing the guitar. I guess it's the same type of slightly absent-minded approach to writing. I've always liked music that sort of begins, goes on a bit, and then eventually ends, rather than having dramatic, dynamic peaks and valleys. In that way, "Quique" by Seefeel is not that different to all the great Smithsonian folk blues recordings from the 1920s.


Q. Which new bands do you recommended
I have no clue, really! I have no idea what's current or up-and-coming. I like a band from Argentina called Modular, but they've been around for a couple of years. I really enjoy Cavern of Anti-Matter, Tim Gane's new Berlin-based group. Stereolab is still probably my favourite band ever. Generally, I tend to follow people I've listened to for years and years and buy whatever new record they have out. The most recent discovery that I love is "Dreams & Desire" by Manuel Gottsching, which was apparently recorded in 1977 but not released until much later.

Q: Which bands would you love to make a cover version of?
I've done a few in the past. On the songbased album from 96-97, there was a cover of The Honeys' "He's A Doll". Ambient noise pop, like most of that album. For another album from around 2002, I recorded Carole King's "Jazzman" and Lesley Gore's "What Am I Gonna Do With You". I also did a version of Lilys' "Claire Hates Me" for one of Club AC30's "Never Lose That Feeling" compilations, but I didn't like my vocals so I never submitted it in the end. Can't think of anything else to cover at the moment.

Q: What are your plans for the future?
Well, I've learnt that what I want to do and what actually happens are two different things. I'm going to spend the next couple of months working out some half-finished material to be performed live, but I won't release anything new this year. Hopefully, there'll be a couple of gigs and maybe vinyl releases of the album and maybe one or two of the EPs from this year. Ultimately, I want to go back and finish some of these older albums and, in terms of new music, at some point in the future, make music for film. I'd love to work with film directors or video artists. I actually get things done quite fast when I work for others! To put deadlines on my own music is a different thing... I don't believe in putting out music just for the sake of it. It's not about perfectionism, but if the time and energy isn't right, it's better to revisit the music at a later point when it feels right.

Q: Any parting words?
Eat your greens, say no to war drums and the boring generation.
*
*
*
Thanks