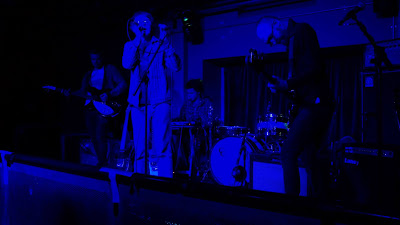 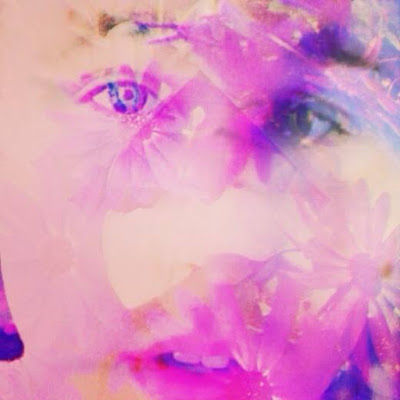 Q. When did Dayflower start? Tell us about the history...
Alex: It started in 2012, when David and I got chatting outside a music venue in Leicester and realised that we had a shared love of My Bloody Valentine, Ariel Pink and plenty of other music. Soon after, we began meeting, with the aim of making a three song EP in David's bedroom / studio. After the EP was done I kept showing up with more songs. Only after we found ourselves with an album did we consider trying to play the songs live. We never intended to form 'a band' and it took a couple of line-up changes until we found the right combination.

Q: Who are your influences?
Alex: The La's, Ariel Pink, MBV, Air, Pavement and early Madonna.

David: It's no coincidence that many of the biggest influences on our music are artists who refuse to be restricted to, or be defined by any particular genre. We find ourselves constantly returning to Beck, Radiohead, Prince, Ariel Pink etc. Watching My Bloody Valentine in 2013 together felt like an important moment for us. The elegance of the songs blended with that visceral sonic assault is quite mind (and ear) blowing. I feel the work of Shields and co resonates in pretty much all the music we make in some way or another.

Q. How do you feel playing live?
Alex: Playing live was never something that crossed my mind with Dayflower. I'm coming round to it now, but in general I wanted to avoid it. I have always preferred the studio where you have more control over the sound. Playing live always felt stressful precisely because of the lack of that control. But now I'm enjoying it more than I ever thought I would.


Q: Tell us about the process of recording the songs ?
David: Usually Alex's chords and vocal melody are the starting point and blueprint for our songs. He has the ability to write songs that sound somehow inevitable. Almost like a melody from childhood. Always there and impossible to forget. After the basics are sketched down I will begin to flesh out the arrangements, adding extra instruments, developing the beats, adding extra melodies or weird noises, samples etc. The sound and feel of a track might change dramatically from the initial demo to the finished mix. We have had to rework things quite a lot in order to play them live. Since we now have a stable band lineup it is so exciting for us to get Chris and Johnny involved early on and develop the sound of the new songs all together as actual band. Whereas before, it was just the two of us.

Q. Which new bands do you recommended?
David: We've been privileged to befriend some very gifted musicians over the years. Matt Flint, producer of our single, 'Heart Shaped Tambourines' plays in a wonderful band called Maggie8. His other group, Oh Brother do glitchy catchy laptop pop. Both bands are well worth a listen. Moscow Youth Cult are another electronica duo and based in London. Their self styled 'VHS Pop' mixes stunning production and sublime vocal melodies. Ola Szmidt is a Polish born, UK based vocalist and songwriter whose work is simply incredible. Just an all round brilliant musician. It's great having friends making music with minimal resources who push you to raise your own bar.

Q: Which band would you love to made a cover version of?
David: We have actually done a version of 'She Don't Use Jelly' by everyone's favourite Oklahoman neo-psych heroes The Flaming Lips. It's out there somewhere online. But well hidden.

Alex: There might be plans to pay tribute to 'There She Goes' by The La's. But if we did do it I doubt we'd play it straight. We would have to do something odd with it.

Q: What are your plans for the future?
Alex: Keep writing songs. Keep recording songs. Work hard to get our music heard.

Q: Any parting words?
Alex: If you're someone who has streamed dayflower's music, watched our videos, bought our stuff, braved the consistently horrible British weather to get to one of our gigs, shared links, blogged, graffiti'd or blabbered on about us . . . thank you so much. I mean that. From the bottom of my heart. Thank you. x

David: Yes. And if you have not done any of the above we suggest you get on it immediately. It really has been surprising and amazing to meet people from all over (as far afield as Brazil !) who connect with the music we make. That means a lot to us and pushes us even further to keep doing what we love.
*
*
*
Thanks