The Concrete Vagina with Klam - An Interview 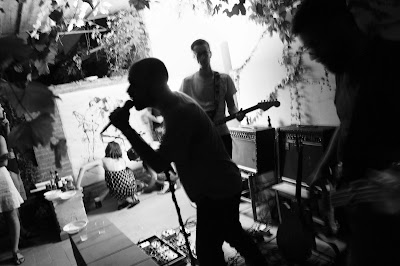 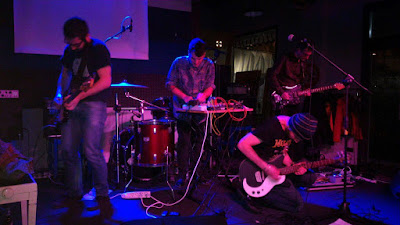 Q. What is your analysis after conclusion The Concrete Vagina? Are you happy with the result?
We are satisfied with the choice of doing the cassette with Land Animal Tapes. We like how Aaris (the guy behind it) is managing things with a quiet and solid attitude. This is a small realese but it was made with much more control from us, directly. We were more aware on how to work on the sound, and even if we love to have artists helping us (Silvia Rocchi with the previews record cover and Serena Schinaia with the design for the t-shirt), this time we liked to have photos made by one of us in the cover design.

Q. How was the process of creating the new ep?
We are quite prolific, so it all started with the idea of recording a few songs to choose in a dozen that were ready. We choose them trying find a balance between a few styles we were exploring at the time, and still are exploring now. Plus the cassette includes a collection of covers. We love doing other people's songs in our style, it is fun and you can learn a lot as a musician. As we did on Bleak, all recordings were managed by our friend Luca Spadoni (the 5th Klam). Bleak was recorded in two sessions in two different times of the year; this time, the EP allowed us to do it faster (I guess it took one day). Still we wanted to keep it lo-fi, and we did a live recording again, as we did on the first cassette. Live recording suits much better for us, plus the songs also have a few improvised parts. Black Labia Minora, the instrumental song is all improvised, I mean all in the sense that Luca (the drummer) pressed play on the drum machine on something that the rest of the band had never heard before and we started playing on it. There is just one take of that impro, and that is what you hear on the record, with no overdub.


Q. What are the main differences between The Concrete Vagina and Bleak?
The differences on the recording process are those above. Then I guess the differences come from the live recording, that make The Concrete Vagina sound more sincere, direct, and solid. Then ras far as lyrics go we are on the same path, there are still – and maybe even more – stories about sick girls and people doing drugs. Diseases and addictions for us are metaphors for relationships.

Q. What were the influences for creating the new ep?
For the lyrics influences come from personal experiences or movies and visual stuff (this time less movies). For the music, I guess for these songs the influences were more specific then before. I guess some Bahuaus, I remember Tommaso (singer) speaking a lot also about the last Peter Murphy record, plus some lo-fi indie rock, Tommaso was really into 90s indie New Zealand bands. Then also a lot of black music; me (the bass) got into Jamaican music, and that was kind of a shock to myself, as I never liked raggae music, but in the last two years I found a lot of inspiration in roots and dub, and I had to definitely change my mind. That kind of music helped me a lot also in the process of recording.

Q. What are your plans for 2016?
Writing and recording new stuff. We have a dozen of new songs ready. I don't know exactly when we will start recording the new songs, maybe during the summer or after. We are not even sure yet if they are going to be on an album, or if we will do a EP too, but there is definitely enough songs for a full lenght. We are also planning shows here in Italy.
*
*
*
Thanks