Dream Machines with The Daisy Heaves - An Interview 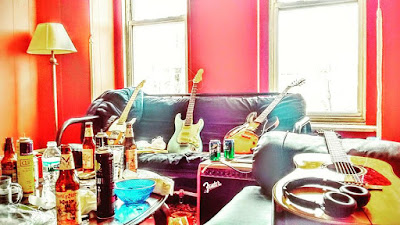 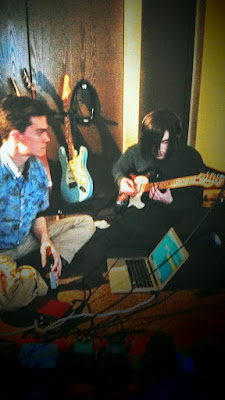 Q. When did The Daisy Heaves start? Tell us about the history...
Ryan: The Daisy Heaves started during the last two weeks of October in 2015. I have been playing guitar and other instruments since I was a little kid. I used to just play bass in bands when I was in high school and didn’t actually start trying to write songs until the summer of 2013, but I never felt confident enough in my early songs to do anything with them.

It wasn’t until I was recording the songs that would make up the first Daisy Heaves album that I felt as though I had something worth releasing. Shortly after I put out our first record I asked my friend, Danny Branske, if he would like to be an additional guitarist for the band. He agreed and we immediately wrote songs together. Shortly after, I was contacted by our current drummer, Will Stratford. He had gotten a hold of our first album through a Craigslist ad I posted when I was looking for a drummer. Danny and I met Will together. We all clicked right away— it was just great chemistry from the start.

The last person to join the band was long-time friend, Michael Regan. I used to play bass in his band, The Echoes and Flowers. He liked the music I’d been making and was all for helping push it further. So, the band has existed for about 6 months now, but we didn’t have a full line up until about a month and half ago.

Q: Who are your influences?
Ryan: Oh man, a lot of different stuff. I am very influenced by local artists and musicians I have played with. The bands I’ve been in and musicians I’ve worked with have without a doubt had a huge impact on me in many ways.

Otherwise, I’ve always been really into The Beatles. My dad is a huge Beatles freak and the first song I remember hearing by them was “Help.” They were the first band that really soaked in, but I’m always finding new influences through hearing new bands or by listening to the same stuff I always listen to. It’s hard to pick a specific outside influence for what I do other than the feeling that I’ve always had— the feeling that I need to create music.

Q. Make a list of 5 albums of all time…
1. Many Levels of Laughter by J Fernandez
2. Coney Island Baby by Lou Reed
3. Ladies and Gentlemen We Are Floating in Space by Spiritualized
4. Revolver by The Beatles
5. Perfect Prescription by Spacemen 3

Q. How do you feel playing live?
Ryan: The Daisy Heaves have not played live yet, but we rehearse weekly. We will start playing shows this summer. We’re focused on recording right now and getting the band tight. I do love playing live though. I haven’t played a show in a while and I’m starting to miss it. The recording binge I’ve been on helps though. I think it’s good for me to stay busy.

Q. How do you describe The Daisy Heaves sounds?
Ryan: I classify our genre as “glow-fi,” but that doesn’t actually mean anything. It’s hard to put music in a box… or maybe I just don’t like to. I don’t know how to describe our sound… I just asked Mike, our bassist, to describe our sound and his answer is: “I couldn’t even tell you because the songs are so schizophrenic, but if I really had to call it anything I would say dirty scatter-brained shoegaze glazed in sativa.”


Q: Tell us about the process of recording the songs ?
Ryan: I write while I’m recording. I usually start out putting ideas onto my phone. If I think of something, I’ll just record right away because my phone is always in my pocket. We’re currently recording two albums with polarizing sounds. On one album, we’re tracking everything at our drummer’s place and only playing to a click. The second record is compromised of tunes that started off really lo-fi and then we put them into Logic so we could record over the skeletons of the songs, and we’re gonna mix everything together in ProTools once we’re done. I like the process reworking songs and listening to how they grow.

Q. Which new bands do you recommend?
Ryan: The Roalde Dahls, J Fernandez, Butter, Boxing Fetish, HollowTapes (formerly known as Groves), The Orange Kyte, Grey Bags, Morgan Delt, Salvia Palth, Kikagaku Moyo. There are so many others I want to mention, but I’m blanking right now. I usually find new music on Soundcloud and repost songs that I really dig. That is my go-to for finding new bands.

Q: Which band would you love to made a cover version of?
Ryan: I would love to do a cover of “How You Satisfy Me” by Spectrum.

Q: What are your plans for the future?
Ryan: Make records and play music for people.