Ghosts with The Vickers - An Interview 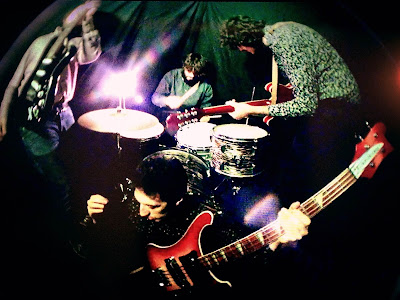 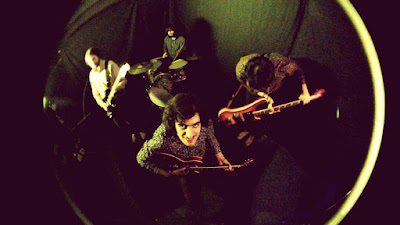 Q. When did The Vickers start? Tell us about the history...
A: This is how the band came together: Two of us, Federico and Francesco were schoolmates and were playing covers around with some bands. Federico started to play with Andrea at home and they both wanted play live original songs, as many other guys in the World. So Andrea joined Federico and Francesco eight years ago and then the band was formed. Marco arrived one year later to complete the group. The passion for good music led us to play together and to record everything from the very beginning. We felt like we needed to create something, and we still feel that need. We formed the band under the name of The Vickers because was a short and incisive name, with no real meaning, there was no other band with that name, it was the name of a kind of aeroplane, biplane, very stylish, maybe it was the wish to fly away and see the World with our music…in a classy way. We started to play covers of The Kinks, Syd Barrett, Neil Young, The Beatles, what we liked… After three months we were working on our own original stuff and started to play it live among the covers. Half set covers and half originals.

Q: Who are your influences?
A: George Martin and The Beatles, for sure. They are a great inspiration for all the people who want to make music exploring multiple ways to do that. Then Pink Floyd, with Syd and later. Doors, a lot. Neil Young, Led Zeppelin, Soft Machine. Talking about recent bands: Tame Impala and what they success gave a lot of attention to bands who make music like us, Wilco (especially live), The Coral, Unknown Mortal Orchestra, Air, Chemical Brothers. Those are all well known, but there are a lot of bands or composers we listen to. I think that often you are influenced in strange ways. You know, those are the basics for us, great bands you listen from the very beginning. But during our last tour we listened a lot of different music like brazilian (for real, it’s not a joke for the interview), italian classics, electronic and instrumental. I give you of some stuff we listened a lot: Jobim, Roberto Carlos, and a lot of MPB, The Roots of Chicha Psychedelic Cumbia From Peru, a lot of Morricone soundtracks and soundtracks in general. The Knick’s original soundtrack is a gem, for example, and it’s not far from Wendy Carlos, a composer we love, and its clockwork orange’s soundtrack. Then Air, for sure and stuff we know well like Dalla, Battisti (in their most experimental works), Napoli Centrale, Area.

Q. Make a list of 5 albums of all time…
A: uh, almost impossible!
Revolver (The Beatles),
Live at Pompeii (Pink Floyd),
Are You Experienced (The Jimi Hendrix Experience),
One Upon A Time In The West soundtrack (E.Morricone),
Blonde on Blonde (B.Dylan)

Q. How do you feel playing live?
A: It’s great, We love to play live and we would like a tour everywhere. Different people, different places. You need to understand the audience. You need to adapt yourselves to stages, audiences, issues. When you know your mates in the band well, this process is magic because it happens automatically.

Q. How do you describe The Vickers sounds?
A: Nooga.com from USA described our music like “The Beatles after one too many acid trips”. It was a compliment so it’s preety cool. Anyway this is just phrase but we like because people can imagine what you make without knowing you yet. Songs, production, experimentation are the pillars. We like to think we create a feel of floating on the sound wrapped in the music, like in Space, in the water, like riding a sea wave with your body, this is what we try to make you feel live.


Q: Tell us about the process of recording the songs ?
A: Usually someone bring something. Then we’ll work on it together, in studio and again alone at home. More or less that is way. Sometimes we jam, but mainly it’s like that.

Q. Which new bands do you recommend?
A: i want to suggest great stuff coming up near us in Italy : our friends Go!Zilla, Appaloosa, Hacienda, Plastic Man, Calibro35, Verdena, Adriano Vitebini’s Film O Sound ! Take a listen to those bands, i promise you won’t regret it !

Q: Which band would you love to make a cover version of?
A: We made covers we wanted to play. I wanna be adored from the Stone Roses was a great one. Maybe we’ll do it again She said, she said by the Beatles in 2013. Lady, from Modjo, for a compilation. Love you to from the Beatles is the latest and it’s a number we always play in our shows. We love it! Maybe you listened yet there’s a video on YT. For the future well i really don’t know. Maybe a Morricone’s cover.

Q: What are your plans for the future?
A: We are recording new great stuff. We don’t know also when it will be released. Or if. We’d like to tour in Europe and outside, like US. If we don’t find the right conditions inside and outside Italy we prefer not to release an album.

Q: Any parting words?
A: We would really love to play in Brazil and we hope to get there one time. Who knows… Have a great time everybody and thanks for your interest from the beautiful Brasil !
*
*
*
Thanks