A Mural Is Worth A Thousand Words with Heads - An Interview 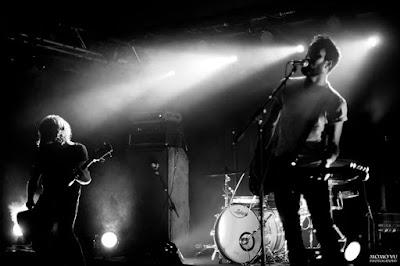 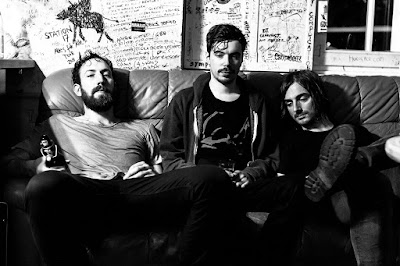 Q. When did Heads start? Tell us about the history..
Ed: I arrived in Berlin with my luggage and not much else a couple of years ago, and started looking for good people to start a band with soon afterwards. Chris was on tour with The Ocean at the time and wanting to do something noisier and more disgusting, so he put up a post on craigslist. I saw Chris' post, listened to some of his riffs, realised he was the best bass player in the world and never went on craigslist again. Peter was on tour with The Ocean as a member of their road crew and thankfully agreed to play drums for us, he is super solid.

So initially we wrote most things online because it's not very often that we are all in the same city at the same time, but when we did all get together in a studio in Berlin things clicked really quickly. In September 2014 we recorded our debut album in the Swiss Alps, in 2015 we released it and toured within Europe, and here we are in 2016 - more tired, a bit older and more broke than ever before.

Q: Who are your influences?
Chris: Boredom and Coffee.

Q. How do you feel playing live?
Chris: It's always a pleasure and probably why we are doing all this in the first place.

Ed: I find playing live addictive. There's a certain feeling that you get from a good show that is really like being high, the energy in the room changes. I guess that's why I'm still doing this, always chasing that feeling.


Q: Tell us about the process of recording the songs ?
Ed: Everything we've recorded so far has been done live with us all in one room together. Everything except vocals anyway. There's definitely a different energy and feeling that comes from having everyone together playing in a room, just like as if we were a real band.

Q. Which new bands do you recommend?
Chris: USA NAILS, VAILS and IRK from the UK and VINCAS and POWDER ROOM from the US and there is a new Band from Germany called GEWALT…they seem to be really really angry.

Ed: I really like DIE NERVEN from Germany, PONY BONES from the US. And KRILL from the US, but I think they just broke up.

Q: Which band would you love to make a cover version of?
Chris: We already did. We recorded a Melvins cover (At The Stake) which you can listen to on youtube, and we've also recently done a Helmet cover (Blacktop) which will be released on a nice compilation on Magnetic Eye Records (NY) soon.

Q: What are your plans for the future?
Chris: Doing less trivial things like eating, drinking, talking and writing more music instead.

Ed: Book us in Brazil! I've never travelled there and would love to visit.
*
*
*
Thanks