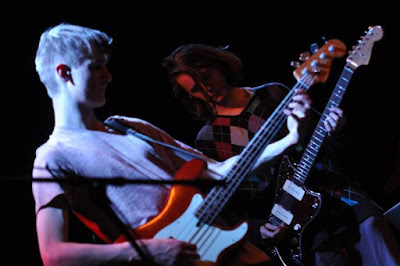 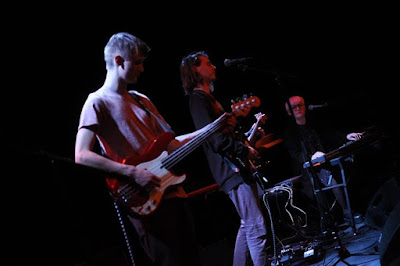 Q. When did Moon Loves Honey start? Tell us about the history...
A year and a half ago I had written a bunch of songs that I realized that I wanted to play live. I needed a band, so I reached out to a couple of my high school friends – Stine and Ludvig, who ended up playing synths and drums, respectively. They happened to know Johan who then became the bassplayer of the band.

Q: Who are your influences?
There is so much wonderful music in the world and I always try to let all of it seep into my brain. And I believe that musicians subconsciously create their own personal expression by combining the ingredients from all of the different genres, bands and styles that they listen to. But sure, there are moods and atmospheres that certain types of music contain that I lean towards. I’m drawn towards making music that has a large emotional value, and I like combining this value with pop hooks and layers upon layers of guitars and synths. When I write music I naturally tend to create these sleepy, atmospheric and slightly bittersweet moods that usually is found within the realms of dreampop, shoegaze, psych, alternative rock and ambient music. I think that bands like My Bloody Valentine, Beach House, Tame Impala, Washed Out and Slowdive are definitely representatives of these genres.

Q. Make a list of 5 albums of all time…
It’s a tough question, but here’s 5 of my favorite albums, that I often find myself revisiting, and that have a certain place in my heart. In no particular order:

Q. How do you feel playing live?
The best shows are the ones where you really vibe on the audience, and when you feel that the audience is devoting itself to you and to be embraced by the emotions that you are trying to get across. We try to just let ourselves be overwhelmed by the sound and mood that we’re creating. We also put a lot of energy into really planning out the dynamics of a show. Basically, we try to guide the audience through a wave of emotions, rather than just play a handful of danceable songs. I was initially worried that we wouldn’t be able to reproduce our music live, as it sounds on our EP, but the response from the audience so far has been overwhelming. Some people have told us that it sounds even better live and I have learned that it doesn’t matter if it sounds different live. Live and studio are two separate things, and should be treated as such.

Q. How do you describe Moon Loves Honey sounds?
Well, it’s a musical universe with lots of layers and elements. We use lots of deep synths and reverberated guitars and both male and female vocals, creating harmonies, alongside melodic basslines and hypnotic drums. Most importantly, we strive to make beautiful music, and I think that our music is as suited for listening to alone with headphones as it is suited for listening to in a more social environment, with friends, at parties and concerts, etc. The melodies are always the main focus for me in our songs, and wrapping them up in dreamy landscapes increase their emotional value, to me. We try to be as energetic as we are sleepy and emotional and as catchy and pop as we are epic.


Q: Tell us about the process of recording the songs ?
Writing the songs is primarily my responsibility. I usually come up with the song and all of the instrumentation, and then bring it to the band. If something isn’t quite right, we collectively come up with a solution. Recording our EP “Apart” took place at Tapetown Studios in Aarhus, Denmark. Ludvig tracked all of the drums and I recorded guitars, bass, synths and vocals for alot of the tracks. Johan recorded the bassparts for some of them too, and Stine tracked her vocals primarily after I had done mine.

Q. Which new bands do you recommend?
There’s a Danish upcoming band – Bleach Blondes – that I have been digging for a while and that we actually had the honor of playing with recently. Other than that, I’ve been listening to the singer/songwriter Tobias Jesso Jr., lately. He is pretty established and released his debut-album last year and has been on Danish radio for a while now. He reminds me of John Lennon and Randy Newman, and his sincerity is what I really love about him.

Q: Which band would you love to made a cover version of?
Ohh, I don’t really know. Something far from the music that I write. We actually once had a joke that we should cover “1 Thing” by Amerie… Messing up a really cheesy pop song is always a fun thing. (Not saying that “1 Thing” is a cheesy pop song!)

Q: What are your plans for the future?
We have a couple of shows remaining this spring, but when summer comes, we might head to the UK to play some shows. We’re planning on recording a single in the fall. So hopefully we’ll keep writing, playing, growing and recording music.

Q: Any parting words?
Thank you so much for giving us the attention and the right space to put into words what our musical project is about. It’s amazing that our music has reached places so far away from where we are based. Hopefully, one day we’ll come to Brazil! Again, thank you
*
*
*
Thanks