Four Mysteries with Rosaire - An Interview 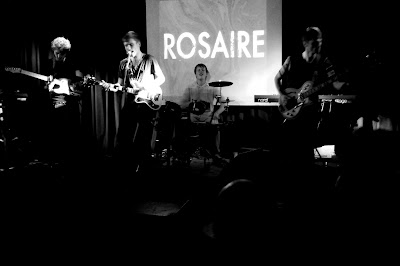 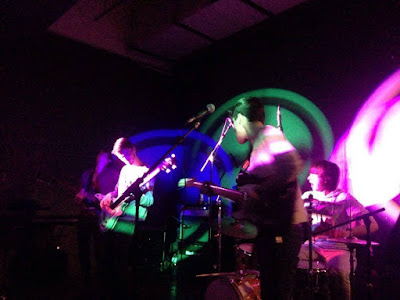 Q. When did Rosaire start? Tell us about the story...
We started playing together in september 2013, but we started playing live in january 2015. The reason it took us so long was that we didn’t want to start doing gigs before having a full-length set and a 4 track EP. So took 1 year to write songs, build up our set and save enough money to record our First EP (Which was financed illegally with the money we earned organizing concerts). The name Rosaire was found in december 2013 on a sunny sunday afternoon when Louis (Guitar, Vocals) and Simon (Guitar, Keys) were walking in the cathedral of St Brieuc (our hometown). Rosaire, the french for Rosary from The Prayer of The Rosary, its a form of prayer in the catholic church which reflects the 5 mysteries. We felt a strong connection with the Name and the symbolism, and the idea of mysteries and their mystical side appealed to us, so we decided to take it as a base and create our own world from that. Rosaire is in no way a christian rock band, and we are not sponsoring any form of religious message. Form then on we’ve worked really hard to be able to perform for a full show, write original music, and create videos (Like Ed's Amazing Liquid Light Show or Mutchachos Light Show or the other guy who works on light show). In june of 2014, we recorded our first EP, titled Four Mysteries, and released it on October 10, 2014. After some adventures, Guirec joined us as our new bassist, and everything has just been wonderful since then. With Guirec bringing some fresh air within Rosaire, we were quick to enter the studio once again with the same producer to record a two track single, which we named Samsāra and released in Febuary of 2016.

Q: Who are your influences?
Simon: I don't know if my influences can be heard in our music, but here they are: In 60’s, with obviously The Rolling Stones, especially the Brian Jones era. I think the guy brought a fuck of a lot of great ideas and he was a skilled musician, being able to like many instruments and I definitely think he was a treasure. I like Jefferson Airplane because they are the embodiment of psychedelic music as far as I’m concerned. They represent the whole hippie movement with song like White Rabbit or Somebody to love. I like Ravi Shankar as well, he's an inspiration and his music helps me study and focus while doing my homework. In the 70’s, there's King Krimson. My favorite band is Brian Jonestown Massacre, I like their sound which is very simple with beautiful leads (the one on Swallowtail is the best lead ever in my opinion). The band is very prolific and I like this, and though each album aren’t the same, they’re coherent between each other. There are The Black Angels too

Lucas : I have many influences. I started by listening to classic rock and electronic music. David Guetta, Daft Punk, Bruce Springsteen, and AC/DC to name a few… Afterwards, I discovered metal music, with band such as Rhapsody, Helloween, Hamerfall, and Rammstein. This last Band was the biggest influence for the approach I have when I’m playing my drums parts. The Drummer's technic is the most impressive thing in this band. It’s not about how fast it goes, but about the rhythm and tempo changes. I also listen to Electronic Music, Minimal, Psytrance, and Nu disco. Recently I discovered psychedelic rock with bands like Temple, and Primal Scream.

Louis : At the moment, my favourite music style is Trip Hop. I really like this blend of different styles. The sources of inspiration for these groups varied with years and time but I can hear oriental inspiration, violons, good basses and there are really great songs and exceptional bands. But I like many other types of music too: rock music regroups all of my classic favorites bands. I really like folk music, electronic music, disco, pop, etc…

Guirec: Garage and Punk rock, Techno and House music. And funky music too. Bass melodies are the best in this type of music.I think all of us listen to a wide variety of music and it's probably where our strength comes from and why our music is psychedelic.

Q. Make a list of 5 albums of all time…
Simon: Their Satenic Majesties Second Request (1996) by BJM: The title of this album is a joke about Their Satenic Majesties of the Rolling Stones's album which was a flop and, was qualified as the worst Rolling Stones album. So this album of my favorite band, is one of the best they recorded. It is very sensitive and it has oriental sounds to it, with no vocals and experimental tracks, many obscure, bizarre and not very well known instruments and it shows us a huge panel of the talent of this band has and the genius of Anton Newcombe.

Lucas: My favorite album ever is Gambling With The Devil from Helloween, (2007). It is THE album that made me discover metal. The over-all ambiance is very satanic, the intro is so strange, with an evil voice. It’s all dark and gloomy and the songs are very aggressive, the drummer, Daniel Löble is really good, he’s the one who made me love double kick drums. My favorite songs off of this album is the longest, "The Bells Of The Seven Hells", the song starts really slow, and before the guitar solo, the tempo slows down, and the beat from the drum is so heavy, and I always hear that moment like a drum solo too.

Louis : One of my favorite album is Morcheeba’s Big Calm (1998). I discovered this about 2 years ago. I really like Trip Hop music (like Massive attack, Regular Fries, etc.) because I find strong emotions, good vibes, and new ways in this music. This album is one of the best for me because many of its songs are import ant to me.

Guirec : One of my favorite album is The Rolling Stones’s 8th studio effort, Let It Bleed. This type of blues drives me apeshit. It’s just so fucking good. I saw them when I was 10, during the Bigger Bang Tour. The Rolling Stones were my first favorite band and they’ll inspire me forever.

Q. How do you feel playing live?
When we started we used to be stressed out because of our lack of experience. But now it's better. When we hit the stage we want to make sure we deliver a quality show, and we aren't happy when the sound isn't as good as we want. We just let everything else go, have a blast, and give 200% of ourselves. Stress definitely is here but less strong than it used to be, because when we play we are usually a little drunk or high.


Q. How do you describe Rosaire sounds?
Our sounds is specific to our personality. Louis plays mostly bluesy rhythm parts, Guirec has a groovy playing that blends in well with, Lucas’ strong and heavy drums playing, and Simon does all the melodies and weird sounding stuff. Everyone plays differently and has difference ideas, and Rosaire is big melting pot of all our influences and the feelings we express throughout our instruments.

Q: Tell us about the process of recording the songs ?
We don't go straight to the studio the second we have a new song or 4 new song. We play the shit out of it live until the song sounds great and has good response from the audience. We let it sit in for some time, let it sink in our spirits, and then after a while we take off what isn't good in the song itself. Afterwards, when we have chosen what we think are the best songs to record, we contact a friend of us who is a recording engineer and we go in a strange studio lost in the nature to rod the basic tracks, like guitars, basses, drums, and keys. It's a very peaceful place, so when we going out we can hear sheeps or frogs and it allows us to chill out so we record in the best conditions. Once the tracking is done, we finish the vocals at our producer’s place, (not in the studio that is) we add subtle things and stuff, and then he mixes it and masters it, and he delivers the final products.

Q. Which new bands do you recommend?
Simon : Jabberwocky because they sound great, like Black Angels, and their songs are cool, they are in a trip, their song sounds like a prayer to the devil, it's a mystical band. Guadal Tejaz, a new band, which plays cosmic and dreamy music. They have some great ideas, sound a bit like Black Market Karma.

Q: Which band would you love to made a cover version of?
When we try to decide which song we’d like to cover, we can't agree on the band or the song.

Q: What are your plans for the future?
Play more music, tour in France and other countries, record an album maybe? We don't really know hahahaha!

Q: Any parting words?
Don't hesitate to contact us to talking about something, or propose is to play and share our music. We are cool guys except our touring sound engineer who can't eat cheese, it's a shame for frenchies like us, ahahah! Many thanks for the interview! Till next time, take care
*
*
*
Thanks