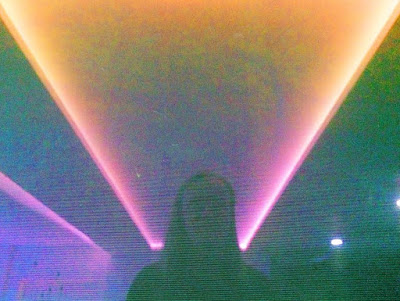 
Q. When did Pet Grotesque start? Tell us about the history...
Pet grotesque started in 2011 when i wanted to share a song i had recorded online and needed to come up with a name for myself, so i plucked it out of a notebook as i thought it sounded good.

I had been making music for many years before that but ever since then the name has fit nicely.

Q: Who are your influences?
I'm generally influenced most by whoever i am listening to over and over again at any given period.
recently i'm into: BAT-BIKE, grimes, chairlift, wild nothing, whitney, ducktails, doubting thomas cruise control, vitas, the new carly rae jepsen album (trust me), jefre-cantu ledesma, ethiopiques, i like kanye's new album

Q. Make a list of 5 albums of all time…
My all time favourite band is the red hot chili peppers but generally, my music is basically my attempt as smushing these five albums together into a big smushed up ball...

I'm also really into a lot of stuff that isn't really music like droning sounds, so if i can only have 5 then i would choose an album called Planet Earth: The Complete Field Recordings Of Ever Sound Ever Made which is an album of field recordings that sounds exactly as you would imagine, and which i have very cheekily made up for the purposes of this interview

Q. How do you feel playing live?
Oh man i would love to do something live, it could be really fun either doing something spontaneous and diy, or something curated in a cool location maybe with visuals or something... but for now my focus is on recording. however, you never know what's going to happen


Q. How do you describe Pet Grotesque sounds?
It's a warped attempt at pop music that ends up sounding a bit freaky, and quite often not that much like pop at all.

I honestly do want to make it quite pop in future - but pop that isn't afraid of being weird.

I like the contradiction you get music that tries to be simultaneously inviting and alienating, like a grotesque pet - i think most people can relate to feeling both normal and strange at the same time

Q: Tell us about the process of recording the songs ?
Basically pg is a home recording project meaning i sit in my studio which is set up on a rug in my living room and play stuff with my guitar or keyboard or drum machine and just track it in various ways onto garageband on my computer.

I typically spent a couple of hours in the night recording different kinds of stuff and eventually something will turn into a song and i'll try and record some of it and then finish writing it as i'm recording. usually do 'vocals' last, and i usually rush this because i can't wait to post the song out online and bask in praise and love, but this usually means the vocals suffer for it - it's a difficult balance but i'm working on it

Q. Which new bands do you recommend?
My friends make the best music:

I love BAT-BIKE, my brother Greybags (who you interviewed which was v cool of you)
the lovely Pit Ponies also HOOPS and Whitney are some bands from the states who are going to get really big i think - i'd probably be friends with them too if we ever met, i like to imagine

Q: Which band would you love to make a cover version of?
Funny you asked! my latest single is a cover of a song called 'Bad Ben' by BAT-BIKE, who are one of the all time greats. The sweet bats themselves gave the cover their official blessing, which meant a lot

Q: What are your plans for the future?
I have a new single coming out soon, with more tunes on the way, and definitely video at some point

I am also working on a couple of other musical projects here and there - want to go more pop and also more ambient and experimental, stretch out in both directions at once