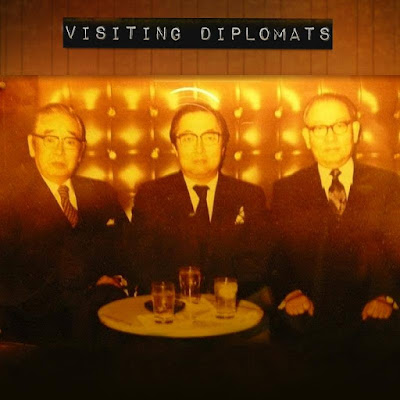 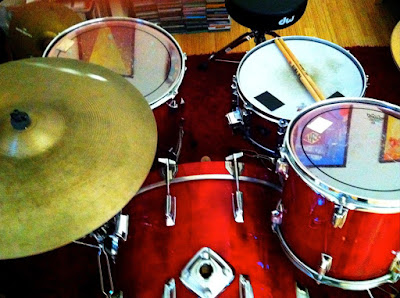 Q. When did Visiting Diplomats started, tell us about the history...
Some good friends were in a San Francisco based band called Ultra Magnetic years ago. I (Michael Lynch) joined an impromptu jam/reunion with them at our buddy Andrew’s 40th birthday party in Denver Colorado in 2012. It sounded so good we kept it going when we flew back to California (minus Andrew). It was fun jamming for a while, but when I brought in some songs I had been toying with it got real. Mike Levin (bass) and John Rackerby (drums) really helped me shape these songs into something awesome, and that eventually became the Bret Harte Road EP.

Q: Who are your influences?
I have a long-running joke with my friend Brandon (bass player in Echodrone) about visiting the “S” bands section of the record store - Slowdive, Swervedriver, Sianspheric, Stereolab, Seefeel, Scala…. you get the idea. In all seriousness, for Visiting Diplomats the biggest influence is probably Swervedriver, but also fuzzed out 90s indie noisepop like Oranger and Overwhelming Colorfast.

Q. Make a list of 5 albuns of all time…
Goodness. Let’s give it a try:
Swervedriver Mezcal Head
Slowdive Souvlaki Space Station (such S!)
Sianpheric There’s Always Someplace You’d Rather Be
The Beatles Abbey Road
The Beach Boys Pet Sounds and all the Smile bootlegs

Q. How do you feel playing live?
Sadly Visiting Diplomats has never played live! Hope to remedy that soon - see below!

Q. How do you describe Visiting Diplomats sounds?
We’re a cross between the awesome indie pop of the 90s and Shoegaze. The more crunchy, pop side of shoegaze. We’ve been compared to Yuck, Catherine Wheel, and The Cheatahs - a huge compliment!


Q: Tell us about the process of recording the songs ?
We recorded everything in John’s house up on a hill in San Rafael. Mike Levin and John brought lots of gear and experience and we tracked everything over a few months in 2013. For mixing we turned to my friend Colin Christian at Wires and Noise in Reno, Nevada. Colin did a killer job working with me to create the sonic vision I had for the songs.

Q. Which new bands do you recommend?
So many new bands - I’d have to go with bands from my new hometown of Portland, Oregon - Tender Age, Cat Hoch, Appendixes, WL, and many more. I also really love Yuck, Snowmine, Wye Oak, and Low. Also my good friends Eugene and Brandon in Echodrone - I’ve been a fan from the start! They have been keeping the shoegaze fires burning for so long and deserve tons more popularity and credit.

Q: Which band would you love to made a cover version of?
Tough one! I think it would be an obscure Brian Wilson/Beach Boys track. Medicine already covered Till I Die so I’ll have to dig deeper.

Q: What are your plans for the future?
I moved to Portland before the Visiting Diplomats EP was mixed and released so the version of the band you hear on the EP may not ever play live. I’m currently working with a new collaborator in Portland on some exciting new material. Best way to keep up with me is on Facebook: https://www.facebook.com/VisitingDiplomats - I should be posting preview track there very soon.

Q: Any parting words?
I’m still pinching myself on how big the shoegaze renaissance has been. Those of us that held the torch for so many years never thought it would reach the near-mainstream state it’s in now. While there is a temptation to scoff at the people late to the game I couldn’t be happier at how much amazing material is out there now. And Portland has a thriving shoegaze and dreampop scene so I get to see it live all the time!
*
*
*
Thanks