Drink the Brine, Get Scarce with Alpha Strategy - An Interview 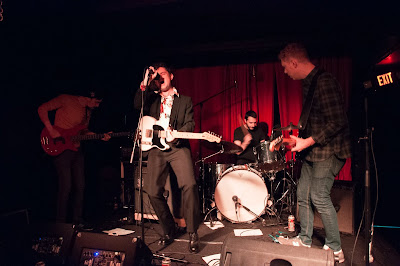 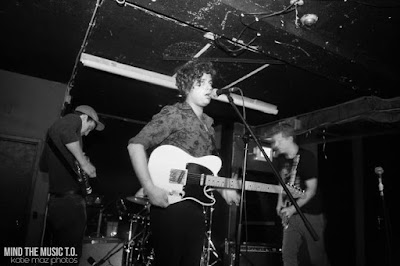 Q. When did Alpha Strategy start? Tell us about the history...
Rory: I started doing Alpha Strategy on my own in 2011. James was involved early on, he engineered the recordings at a studio he used to work at. Eventually James also started playing guitar for AS, and we were joined by The Baron on bass and Ben on drums not too long afterwards. The Baron left
town in 2013, so Ben moved over to bass and then Evan took up the drumming.

Ben: Rory and I had played shows together over the years in separate bands and probably ended up meeting officially through James. I joined the band a couple years ago and played the drums initially and now play the bass. Evan: As far as I know it was Rory at first maybe around 2012. I had
joined after the fact in 2014.

Q: Who are your influences?
James: Bands with guitars, and guitar playing that sometimes wanders off from where the song is at or becomes deliberately off key and theme from the song, but still manages to sound appropriate and rocking. Silkworm, MX-80 sound and Pile are all bands that do this really well.

Ben: There's a lot of them. Not all of them musical. Or good.

Q. Make a list of 5 albuns of all time…
Rory:
The Birthday Party - Mutiny / The Bad Seed
Fred Lane & Ron Pate's Debonairs - From the One That Cut You
The Jesus Lizard - Goat
The Gun Club - The Las Vegas Story
Ann Steel - Ann Steel

Q. How do you feel playing live?
Rory: !

James: Great. Even if a show goes badly or is demoralizing for whatever reason, I’m not sure what the point of being in a band is if you’re not going to play shows. Being in a recording-only band seems like having to do all the work with none of the payoff.

Ben: I feel good! There's a lot of thought put into everything so after things are written it's exciting to be able to show it to other people.

Evan: Feel pretty good usually. It's pretty good to actually get up and play music with people in the room who aren't the band. And if its a good show maybe feel some good vibes from the crowd.

Q. How do you describe Alpha Strategy sounds?
Rory: File under "Roll" music

Evan: Rory falling down the stairs. Train barreling down the tracks. The guy in slipknot who plays the garbage cans.


Q: Tell us about the process of recording the songs ?
Ben: It was done in about 3 days live off the floor. We were fairly focused on what we wanted and were prepared to do it. It was very similar to how things happen when we just practice the songs at home but we were in Chicago and Steve Albini was pointing microphones at us.
Evan: Quick and to the point. We would lay down all the beds until we got a good take and then layer vocals. No other overdubs or fancy tricks. Just trying to capture how the band sounds playing live in a space.

Ben: I haven't been listening to a lot lately. Kendrick Lamar is really good. Pile is awesome.

Q: Which band would you love to made a cover version of?
Rory: Down-and-out and/or mean-spirited country songs

James: There’s a song called “downtown came uptown” by a kind of cheesy Canadian blues-pop guy, his name is David Wilcox. We jam on it for laughs in practice sometimes. I think if we found a way to make it furious and noisy, played very loudly, and actually give it some real intent and anger
it could be a legitimately satisfying cover song.

Evan: I'll have to agree with James on this one and go with a David Wilcox tune. Or possibly [Rodd Keith's] Do The Pig.

Q: What are your plans for the future?
Rory: Go back to Europe for more shows later this year, buy up a whole lotta vinjak in Serbia.

James: I’m going to keep on paddling my cool canoe, thanks.

Evan: keep playing music and record an album that is a positive development from the sound of the last one.