Lights Out with Cherry Crush - An Interview 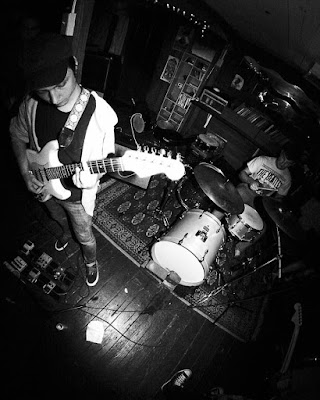 Q. When did Cherry Crush start? Tell us about the history...
Cherry Crush started around 2012 when me and my friend Jackson started playing guitar together. We made some really shitty demos under the name “Bay Watch” before we arrived on the sound we have now lol. We didn’t have drummer or bassist for years so we kind of made up songs with just 2 guitar parts. We didn’t start playing gigs until 2014 when we moved to Lexington Kentucky. We never played in any bands before that.

Q: Who are your influences?
I think we’re influenced by the aesthetic of bands like Lush, Cocteau Twins, The Verve, and Curve. We were listening to a lot of Nirvana early on also. I’m really influenced by 90s guitar pop, and Jackson listens to a lot of heavy music lately. Kind of a weird mix.

Q. Make a list of 5 albums of all time…
I’ll just mention some of our favorite albums right now. I’ve been listening to Bossanova by Pixies and Bury the Hatchet by The Cranberries. Jackson has been listening to Saturday Night Wrist by Deftones and Spooky by Lush. We listen to newer bands too: We're both big fans of the album True by Violens.

Q. How do you feel playing live?
I feel like when we play live we sound really solid, at least from where I’m standing. I think Jackson loves playing live, he goes insane… I don’t know how he can hit the notes while he’s flailing around like that.

Q. How do you describe Cherry Crush sounds?
Oh I don’t know… I think shoegaze is a really obvious label for our sound. A lot of our songs have dark vibes but are sort of short and sweet at the same time. Our songs are usually like 3 minutes long.


Q: Tell us about the process of recording the songs ?
We recorded our Demos EP at my friend Joey’s house on a 4 track. He’s sort of a genius at recording on tape. Check out his band, The Elsinores. We plan on recording in a studio eventually…

Q. Which new bands do you recommend?
We just played a show in Athens, Ohio with our friends in Megawave, and a Cincinnati band called Smut. They’re both kind of doing similar stuff, and they rip. I’m gonna name drop some Lexington bands too: check out Felchers, Bty Slp, Teal Grapefruit, and this band called Ezra… I hear they are pretty good.

Q: Which band would you love to made a cover version of?
Our bassist, Tommy plays this ridiculous version of Halloween by The Misfits at every practice. And Tourette’s by Nirvana. He screams them at the top of his lungs haha.

Q: What are your plans for the future?
We are playing Lobsterfest in Athens, Ohio on April 23rd with Suuns and Waxahatchee I believe. Very cool.

Q: Any parting words?
Its kind of crazy how much attention our old rough demos are getting. Hopefully we can share some new stuff soon!
*
*
*
Thanks