Night Train Daydream with Maths and The Moon 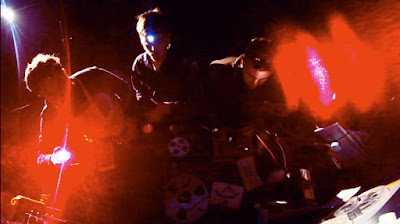 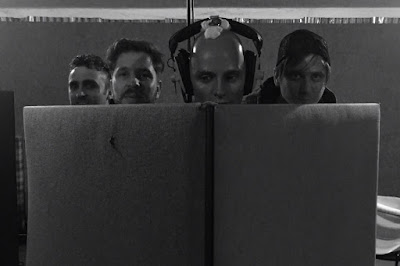 Q. When did Maths and The Moon start, tell us about the history...
Andy: The band formed in Southampton in 2009 after the previous band we were all in had run its course. We wanted to explore some musical territories that perhaps we weren't ready for before. We have been making music together for a long time and are really lucky to still be doing so. We released our first album ‘Night Train Daydream’ in 2013 and are just about to release its follow up ‘Familiar Strange’ in Spring 2016.

Q. Who are your influences?
Andy: In terms of sound, we have very much been influenced by bands like Deerhunter, Can, Nirvana, Sonic Youth, Boards of Canada, MBV, Primal Scream, The Velvet Underground, Bowie, Autolux, etc. But influence or desire to write and create can come from anything, good or bad.

Q. How do you feel about playing live?
Matt: Playing live is a big part of what we intend to do. We have been playing together in other forms for a lot of years now and we have shaped our albums with recreating the live sound in mind. We’ve had a lot of fun playing over the years and are looking forward to playing the new album to people soon.


Q. How do you describe Maths and the Moon's sounds?
Andy: It jumps around really, from post-punk to krautrock inspired grooves, and from grungey sounds to textured soundscapes. We like to mix it up and not limit ourselves. It’s great to lose yourself when songwriting, see where you can go mentally and then hopefully come back with something different from the last song.

Q. Tell us about the process of recording the new album?
Luke: We knew that we wanted to make a more direct representation of the live show with this album, so we decided that the main part of the recording would be made up of us playing together. We have a new rehearsal space which was large enough for us to do that, so we set up in the same room, got everything balanced and played. It was fun and we were able to get the main part of the recording done over a long weekend. We then spent a little time doing guitar and vocal overdubs and that was it.

Q. Which new bands do you recommend?
Andy: Not necessarily new, but we’ve been enjoying the Fat White Family and Thee Oh Sees. Closer to home, Melt Dunes and Dead Rabbits are making some really great music.

Q. Which bands would you like to cover?
Luke: We have always loved '2000 Light Years From Home' by The Rolling Stones. We used to listen to it a lot when we first started playing together and have always said we'd love to play our own version of it one day.


Q. Whats the plans for the future?
Matt: We are about to release our second album ‘Familiar Strange’ and are looking forward to playing many shows to promote it. Then we will start on our neo-space jazz record!

New album ‘Familiar Strange’ is out May 2016. Available on all digital platforms and also on www.mathsandthemoon.bandcamp.com
*
*
*
Thanks