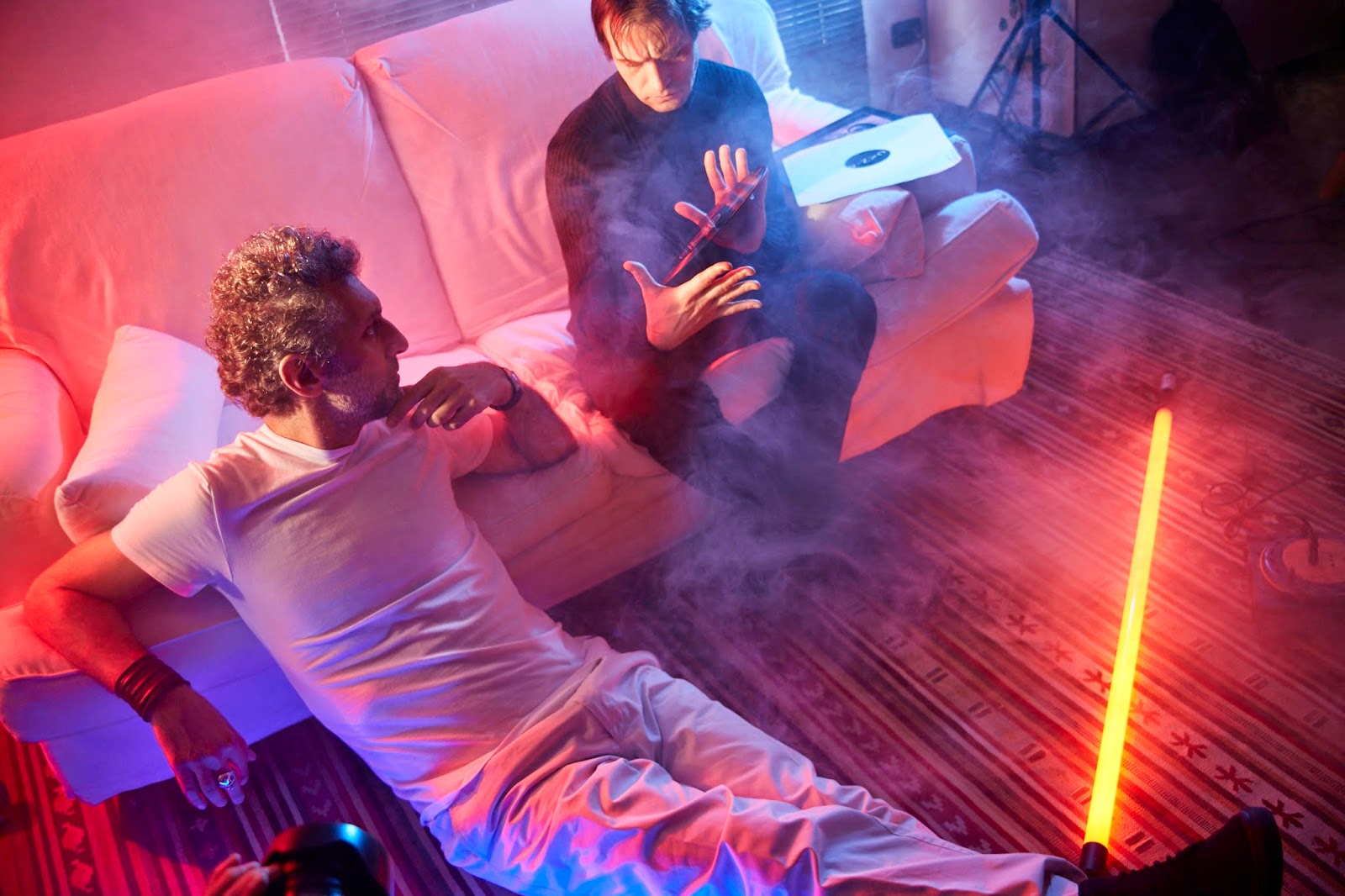 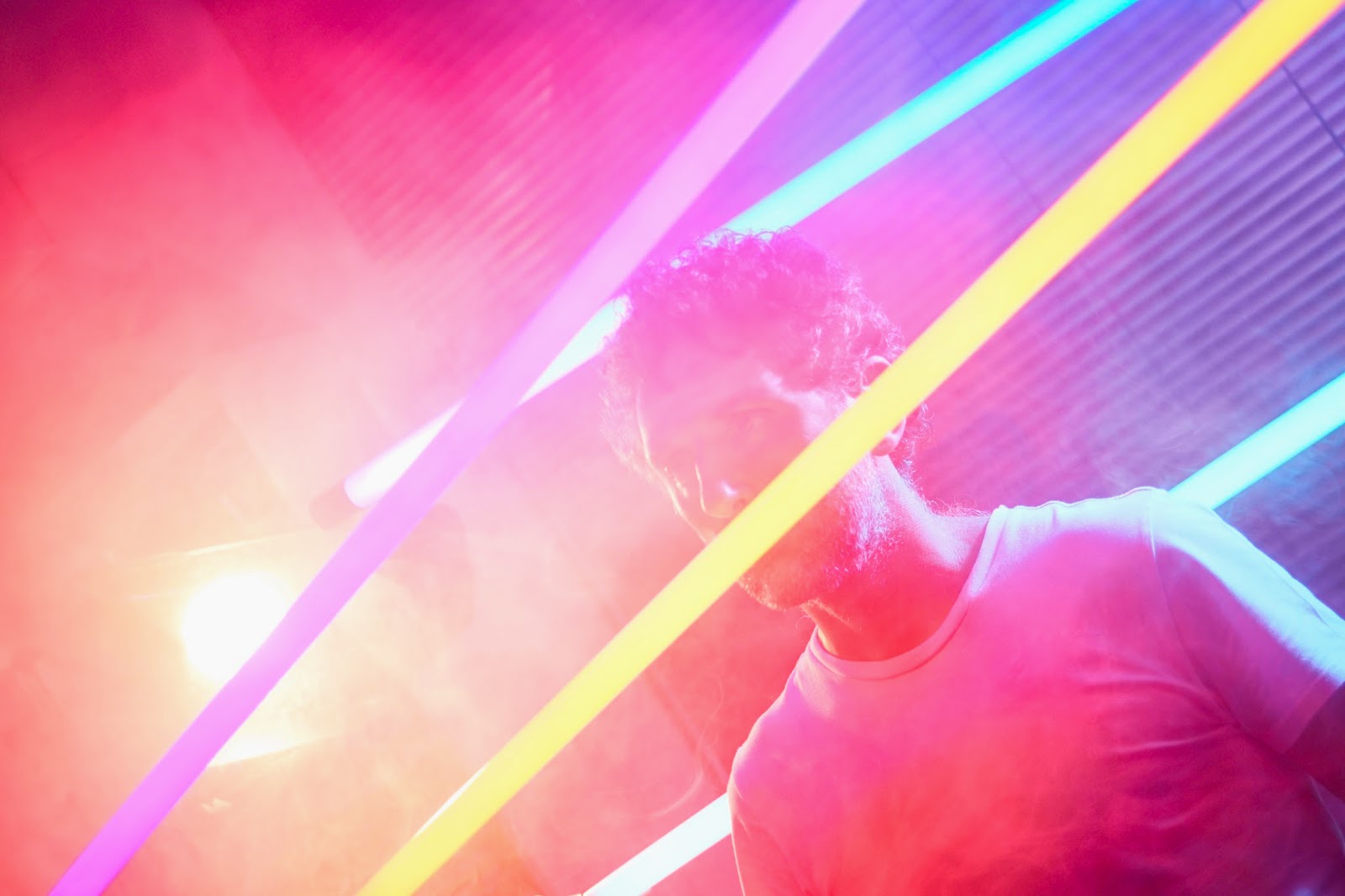 Q. When did Shining Dust started, tell us about the history
Mark and Alex: The first one, a sole artist and methodic guitar player, keyboard operator and sound engineer. The latter, a singer, rhythmic guitar & bass player and MIDI Live Set Up Specialist.

Both are careful observer of the street, of the periphery, of the “undergrounds” (out of which the name of the album recorded with Aqusha), and of all the realities in which people live and move around alienated by their everyday life routine, struggling against poverty, oppression and corruption.

Shine and Dust ask themselves how and what does the humanity lives being so busy in taking advantage of one another and creating sentiments of indifference, suffering and hate; both feel and believe that simplicity and the essence of life reside exactly in these peripheries and are convinced that from a dialogue and a meeting with these persons a real sense of awareness could scatter on the dust being inherent in the nature of the human being. Accepting this reality would create the ambition to live for what we are, in the attempt to reach the true happiness, the spark, the Shining. Together Shine and Dust have given life to their project, Shining Dust. United by the passion for music, in 2009 Alex and Mark decide to start playing together, at first for the fun of it. But soon they realise that notwithstanding their different musical background (Alex is a fan of the 80’s New Wave and Grunge Brit Pop of the 90s, while Mark’s preference was the 70’s psychadelic music), they both know that they have a strong feeling. They began with live performances with covers from Bob Dylan, RadioHead, Pearl Jam and Oasis, but soon other 2 musicians joined them and decide to form the “Aqusha” band, under which they began to compose and play their own pieces, recording in 2012 the “Sotterranei” album – available in cd and vynil format.

Aqusha’s live performances are an immediate success. The band has performed in various nightclubs in Milan, among which the Tunnel and Alcatraz where they participated to the final of the “Emergenza” national contest event! Link: (http://www.emergenza.net/IT/it-it/band/303/52617/aqusha.aspx) The artistic maturity of the group injects in Mark and Alex a strong dose of confidence with respect to the future and when some troubles and misunderstanding emerged within Aqusha members they decide to interrupt the collaboration with the other musicians and to dedicate themselves entirely to Shining dust project.

Q: Who are your influences?
Shining Dust influences go from the 80’s new wave – post punk – sinth pop to the Grunge Brit Pop and Trip Hop of the 90’s, from the 70’s psychedelic music to the world music like samba. The artists who mainly influenced us are the following: Joy Division, New Order, Radiohead, The Cure, Gorillaz, Nick Cave, Depeche Mode, Portishead, Simple Minds, Moby, Massive Attack. 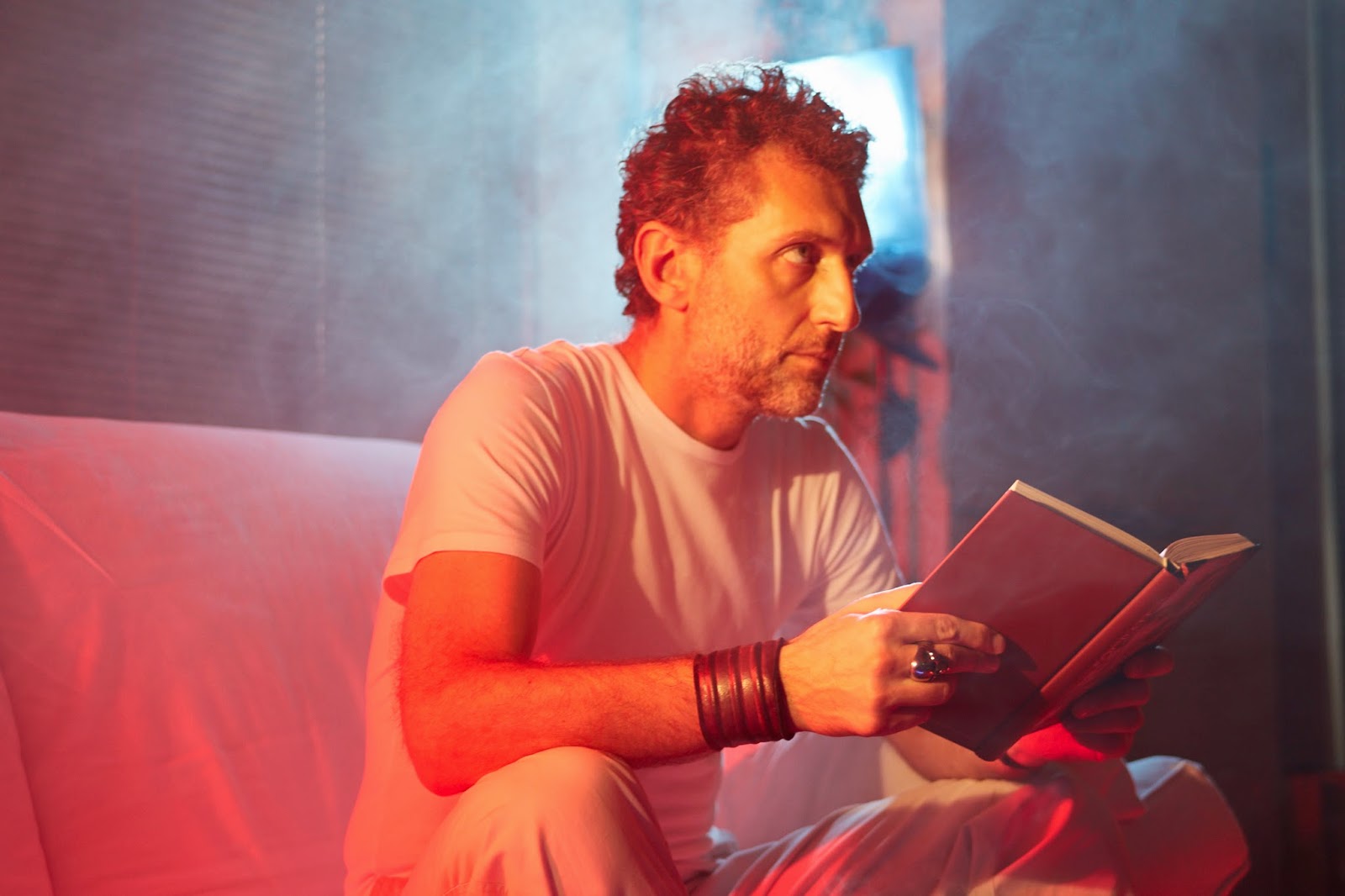 Q. How do you feel playing live?
Before Shining Dust project, Alessandro was the founder and leader of New Wave band called Aqusha who, during 2013, played live in many popular Music Club in Milan like Tunnel Club and Alcatraz where Aqusha was nominated as one of the best live band of the year. As you can understand the stage is our environment and live performance is our best way to express our energy, our sound and our look. Link Aqusha Live at Alcatraz (https://www.youtube.com/watch?v=AksqZbb7wYc).

Q. How do you describe Shining Dust sounds?
Alex: As concerns the stylish – cromatic aspects, Shining Dust is a grey – blue music type just as the persuasive austerity of an iceberg in a slow and silent motion; that said, very much distant from the redish colours steaming out of narrowminded and sordid rock ignorance. In a very natural way the duo unifies many musical influences leaving out, such as unwelcomed guests, any wail and whining blues. After all the main textual message is not imperious nor self praising, but a quiet observation of some aspects that have remained forgone for too long. The type of instrument that are used and mostly the filtering of special effects are closely studied to intensify the "mind - expanding" aspect more than the "muscle – moving” one.

That being said, echos, flanger, phaser and chorus prevail over distortions, fuzz and fake rock-like sounds, putting the ear attention in harmony with the mental one. In such a perfect combination there is also a voice that is deliberately without boundaries, the heart of the iceberg, the heart of a message that does not want to impose, not even itself, but to spread through sounds that will capture in a soft but unrelentingly way.

Marco: SD sound is full of delicate moves on a classic song-implant at times and on a more free form some others. A sound actually pointed on modulation effects more than on distorted ones. We played our instros except for drums, we registered on our own the main basis and then the arrangement, mixing and final production is ongoing at a professional studio. The first seeds of many numbers date back almost 2 years, and a lot of variations were undertaken during time.........following the mood of the moment.

Q: Tell us about the process of recording the songs ?
Usually the process starts with a sound we like very much! Taking inspiration from that sound Alessandro compose a bass or guitar or keyboard line or a drum groove or a voice melody. After that we meet each other to listen the base line or the base groove and try to imagine the rithm, the sound and the melody of the song. When the inspiration come to our mind we start to play and record other instrument tracks using Logic Pro X software sequencer. When we have enough tracks well recorded on our sequencer we start the arrangement/composition process working on audio tracks editing and sound engineering. The last track we are used to record is the voice. During the mixing process we work hard on volume, compressor, reverbs, delay, harmonizer and other effects and Logic Pro plug ins. The last step is mastering that we usually delegate to some specialized regording/mastering studios. 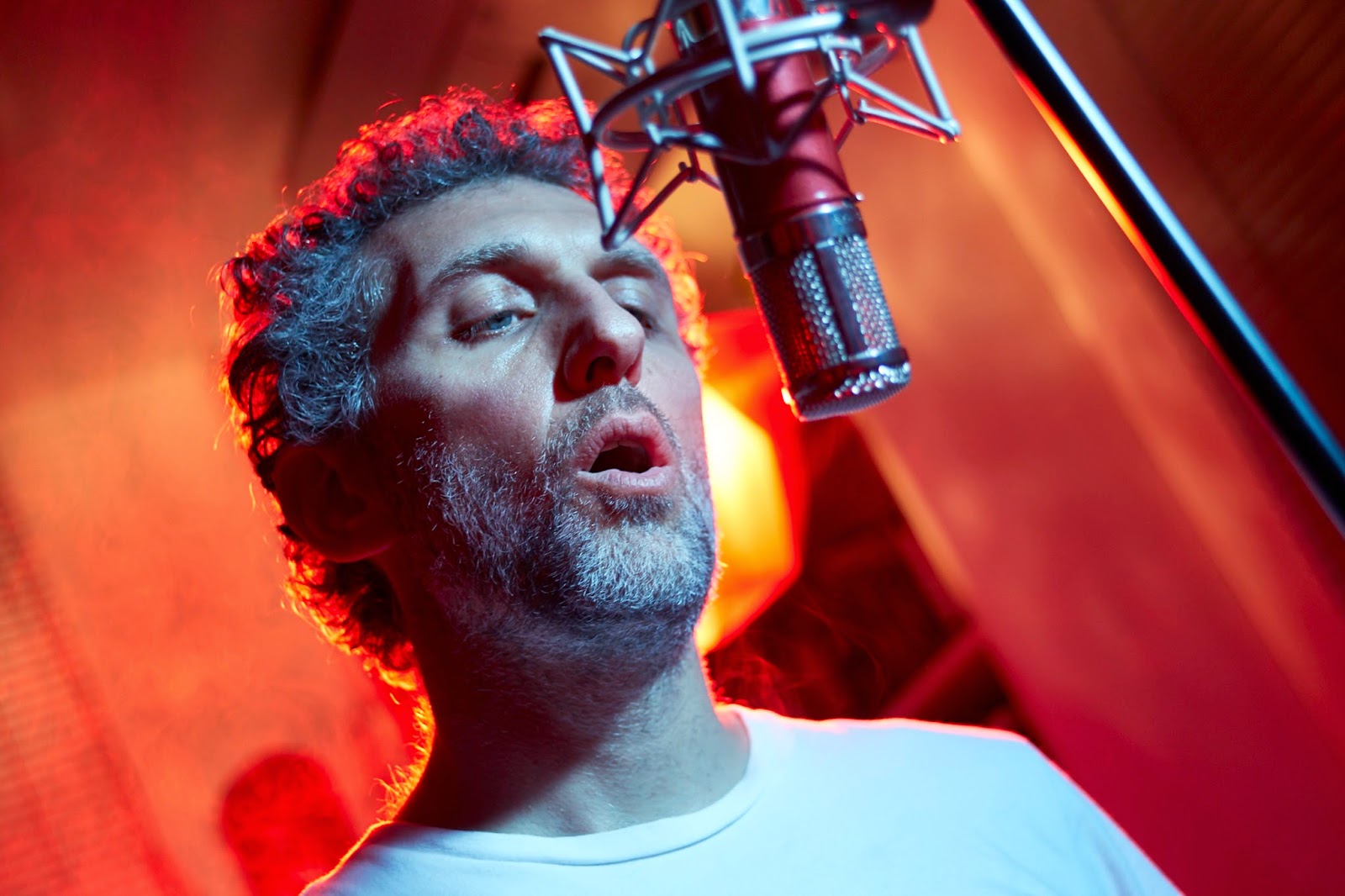 Q: Which band would you love to made a cover version of?
New Order – True Faith

Q: What´s the plans for future....
Shining Dust has signed a record contract with Seahorse Recordings for the realization of his first 9 tracks LP called “Mirror” and one Videoclip! Everything will be out in September 2015!