Face to Face with The PeΔrls - An Interview 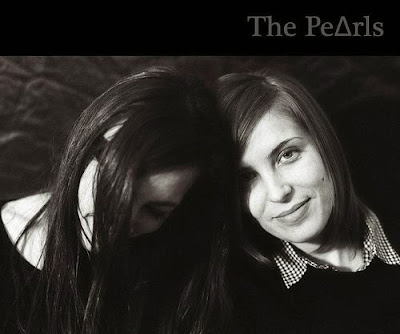 Q. When did The PeΔrls started, tell us about the history...
We started in 2012. That year, I (Stella, drums and voice) have just started playing drums and I was looking for someone for practicing a little. I knew Simona (guitar and voice), because she was already playing in a girl garage band. So I have contacted her and since the first time we went to rehearsal, I felt that there was a good feeling between us while playing: even if our background were not the same (me, more into punk stuff and Simona more into psychedelia) we were completely open minded and free in what we were trying to do, our way of playing was very primitive and spontaneous, absolutely not technical and soon we had some songs ready.

Q: Who are your influences?
Our influences are various, from the 90s brit pop bands to the Nugget’s compilations, from the Velvet Underground to the modern garage-psychedelia like Brian Jonestown Massacre or The Jesus and Mary Chain.

Q. Make a list of 5 albuns of all time…
These are really stone miles…
The Doors – Strange days
The Stooges – Raw power
The Velvet Underground and Nico – st
The Beatles – White Album
The Kinks – Face to face

Q. How do you feel playing live?
Playing live is always an emotion. Before the show, I am always a little bit nervous, I feel a lot of unexploded energy inside me. As soon as I go on stage, I try to focalize this feeling into the music, to concentrate myself only in what I am doing, I see only the drum set and my band mate. The rest doesn’t exhist.

Q. How do you describe The PeΔrls sounds?
Mix all the bands I have mentioned in the previous questions. Add a spoonful of unconsciousness, a cup of spontaneity, a pinch of mystery, shake well and you’ll have our sound.


Q: Tell us about the process of recording the songs ?
Well, jokes a part, songs come out in a very fast way. Usually one of us has a riff on her mind and during rehearsal we try to work on it and complete it in a first version of the song. All the album tracks have been improved during the recording process. We have recorded in an home studio with a couple of friends, Marco and Arjuna. We have played drums and guitar in the same session. Then, song by song, we have decided what to add as “extra”, for example a xylophone track or the part with the sitar. If you came there, you would have seen two girls playing in the most childish sense of the world. Later, a big and well done job, has been done during the mix by Nene of the Movie Star Junkies in his own studio.

Q. Which new bands do you recommended?
There are some young Italian band that I wish to recommend: New Candys, Sultan Bathery and, as last, my favorite Movie Star Junkies. They are very good. Hope you will enjoy their music.

Q: What´s the plans for future....
At the moment I don’t see a future for the band. We never officially split, but personal problems prevailed over all. I can say, speaking with a lot of optimism, that we are “in pause”. I regret a lot, since I really love the project and we have had so many good feedbacks, especially out of our country.

Q: Any parting words?
Glad to have some new fans in Brasil, I hope you will listen to the Pearls’ record and make a (safe) trip in the other space! Thanks for the support, wish you all the best.
*
*
*
Thanks