Mother of Pearl with Silent Pictures- An Interview 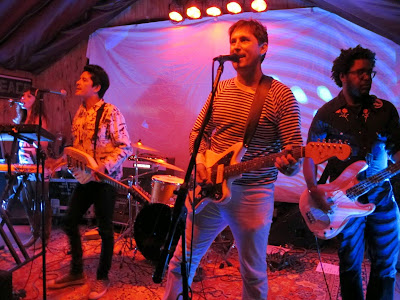 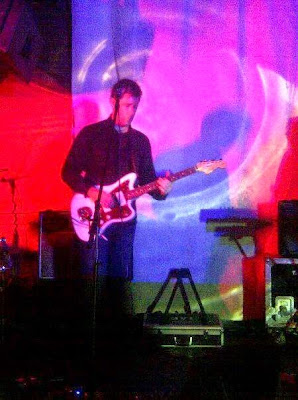 Q. When did Silent Pictures start, tell us about the history...
A. After performing since the early 1990's in the San Francisco Bay Area I really started to wonder if was all worth it. By 1995 I had recorded on two lost Shoegaze LPs with Valeria and Your Precious You and watched Britpop kill bands like RIDE and elevate the likes of Oasis and Pearl Jam. Friends like BJM and Dandys were starting to gain exposure but still I felt it an excellent time to check out. After some years living in Santa Cruz and later Beijing China, I started experimenting more and more in electronic music, it was a blissful time. I started listening to everything, discounted and pirated... Whatever I could find in a bin. By the Early 2000's I moved back to San Francisco and started to promote music I'd been writing overseas. I ran into Rick Maymi from imajinary friends and BJM and he told me about a band he was going to join called Mellow Drunk and met Leigh Gregory and I joined on bass. I highly recommend any of those three albums. They are great work. During that time my roommate started an all girl band of SF post punk lesbians called Boyskout. She cleverly coaxed me into joining and we released three albums and had some worldwide success. By 2008 those projects ran their course and I started really getting into recording and writing for Silent Pictures. Sometimes I'd bring in a session friend or two to flesh out the tracks. That's where a lot of the first three EPs, Silent Pictures, Loretta and Cosmic Slumber Party came from. By 2010 I started releasing them on Green Fuse Records. I remember our first show was opening for Gene Loves Jezebel, The Blank Tapes and Sky Parade at the Knockout in the mission, it was me with sequencers and a 12 string guitar. There's a great video of our cover of Bob Dylan's Baby Blue that was filmed live that night. All the early work had a hand made film which I created. Some are really quite beautiful like Ricochet. That's what got friend Rene Love from Valeria who was living in NYC in touch with me. We started working together and recorded some of the first LPs tracks like Postcards and History of Rome. He started to record more and more with me which is why in the credits he is the only band member on Under Exposed released in 2013 with John Fryer of 4AD and mute records as producer.

Then Rene moved to Italy for awhile and I found a permanent band with David Conrad on Drums, Jafar Green on Bass and Christina Stanley on Keys. We've performed some festivals and noteworthy shows and started focusing on recording our 2nd LP at the end of 2014. We are nearing the end of that journey and will have new music released in 2015.

Q. Make a list of 5 albums of all time…
This is tough as my mood changes but at the moment:
Barbed Wire Kisses - JAMC
Electric Warrior or The Slider - T-Rex
Any Roxy Music Album
Any David Bowie Album
Edith Piaf or Spacemen3

Q. How do you feel playing live?
A: I enjoying playing live and we are all very comfortable. If less than 100 show up or thousands of people, It doesn't really matter to us. We've all had plenty of time playing lots of gigs over the years. Silent Pictures is a far more polished band than earlier bands I've been involved in.

Q. How do you describe Silent Pictures sounds?
A: I would say our first LP sounds a bit like a lost 4AD record. I have always been interested in lush reverbs and delays but also memorable riffs and changes. More about the song than being psychedelic or hazy for the sake of it. Always really loved hooky Eno like keyboard sounds and classic arrangements. Our new record expands a range of sounds from the late 70's, 80's through the early 90's in terms of production quality and choices in gear, instruments and recording techniques. The song writing is much more expansive. From classic late 50's Rock, 60's Psych, 70's Glam and Post Punk, 80's Alternative and Ethereal through to today's sounds...


Q: Tell us about the process of recording the songs ?
A: Working with John definitely influenced some of the sounds of the first record. After all he helped shape the sounds of the Cocteau Twins, Lush, Chapterhouse, Bauhaus, much of the original alternative and psych music from the 80's and 90's. I would send him stems to his studio in Norway and in the morning I would hear a mix. Then I'd tweak with it and transfer it back.

For our second LP it's been different. We have a real band. The performances are live played and not overly technical, not full of fancy edits and loops. We designed it to sound exactly as we performed it live at Skylab Studios. We are using entirely mic'd analog signals and then later mixed it through Dave Grohl's Sound City Neve 8028 Board. It was quite daunting working there while realizing the significance... So many classic albums: Fleetwood Mac, Neil Young, Nirvana, Weezer... So many major release albums pass through that desk. Like being part of history.

Q: Which new bands do you recommend?
New Pants (from China) The Horrors The Soft Moon The Black Angels Fever The Ghost

Q: Which band would you love to made a cover version of?
A: Well we've recorded or performed a few. From OMD, Wire, Pale Saints to The Field Mice. The next one I'd like to record is..?

Q: What´s the plans for future....
A: Our future plans include releasing our 2nd LP and additionally our first LP on vinyl. We will continue performances through tours and festivals

Q: Any parting words?
A: Silent Pictures would like to thank all of people around the world that continue to be interested in our work, promote and enjoy our music.
*
*
*
Thanks