Maria´s Comet with Mermaids - An Interview 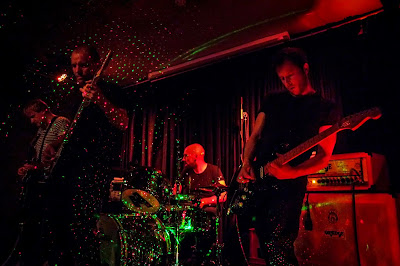 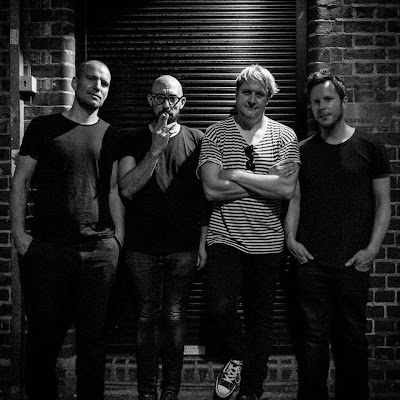 Q. When did Mermaids started, tell us about the history:
We’ve known each other for years and a couple of us used to play in another band together. The four of us went away together for the weekend to a little seaside town down in Kent called Whitstable, the intention was to do some fishing, but we just ended up on a pub crawl like always. Then we were in the camp site listening to the Jesus and Mary Chain and we drunkenly decided to start a new band. I was amazed that we actually did start rehearsing together when we came back to London, but we did and it sounded good right from the start. It was obvious from the start that we had a good chemistry and it instantly sounded powerful and dynamic.

Q: Who are your influences?
I guess this should be the part where I talk about My Bloody Valentine right? Haha. No, we love lots kinds of different music, but I think what comes out most in the sound of the band are the noisy guitar bands that you can hear lots of different textures and melodies under the fuzz. Slowdive are great at that, the songs on Souvlaki could have just been written on an acoustic guitar and never been any more that that, but when you hear the band play them there’s a great beauty in the multiplicity of the sounds. Also when you play incredibly loudly, there’s an extra element of your ears not being able to cope with the volume and after a while you can cause an auditory hallucination, which is of course different for everyone in the room. I generally hear it as violin type sounds, but the idea of everyone who is watching to be hearing different melodies under and over what you are actually playing is incredible. Also the melodies they are hearing originate from their own brains, so the band is effectively just unlocking the tunes that the audience already had hidden in their heads. You don’t get that with a recording so I think that is why people still love to go and see bands like ours play live.

Q. Make a list of 5 albuns of all time:
This is a difficult one and probably changes on a dairy basis, but today I’ll say:
Siamese Dream (Smashing Pumpkins),
Psychocandy (JAMC),
Loveless (MBV),
The Head On The Door (The Cure)
and Violator (Depeche Mode).

Q. How do you feel playing live?
I can only speak for myself but I’m usually concentrating on not messing up the singing, the guitar playing comes as second nature really and we tend to improvise the guitar parts more than you’d expect. In the parts where I’m not singing it’s cool to be able to close your eyes and feel the stage vibrating under your feet and a new sound is whistling around in the noise. We’ve got a load of strobes, laser lights and a smoke machine, so we try to create that teenage disco feel and appear in silhouette as much as possible. If you can create a little atmosphere of your own for 30 minutes while you play I think it’s probably worth putting in the effort. If you ever see A Place to Bury Strangers, they have this amazing white light uplighter show with loads of smoke that makes the whole thing feel like you’re in some kind of industrial factory or a battlefield or something, it really compliments the music. Some bands are good looking and have great dress-sense, we’ve got lasers. 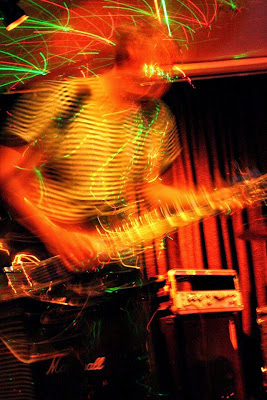 Q. How do you describe Mermaids sounds?
There are three basic sounds we use and try to mix them up within a song as much as seems appropriate: there’s the cranked fuzz sound, the daydream-lullaby sound and then the static wall of noise. They all require lots and lots of pedals, haha. Also recently we’ve been playing some more post-rock style passages since Daro swapped his bass for a Fender VI baritone guitar, so it’s kind of like having three guitars as he uses fuzz and delay pedals with it. I think overall the main aim is sound either like a swirling, hypnotic lullaby or like a swirling seasick fuzz bomb. A couple of years ago at an air show, I stood underneath a Spitfire as it flew over at about 500 feet and the Doppler shift sound it made as it went over was ridiculous, well there’s a part in one of our songs (Zeros and Ones) were the guitars in the chorus sound exactly like that. That’s the sort of thing its difficult to capture when you’re recording an album, but I think we’re getting there.

Q: Tell us about the process of recording the songs?
It’s quite a contrived process really, and we’ve been recording our album for over a year now so we’re not the quickest band at getting things done, but it’s almost done, honest. We start out by playing live in the studio to get the drums tracked. The bass, guitars and vocals from that session are then dumped and we layer the rest on top. We’ve got a cool practice place that we share with a couple of other bands, and it has a great sound in the room and we can leave our equipment set up, so we’re doing all the overdubbing in there. We also did some weird things like building a massive wooden box in my cellar and putting a Marshall 4x12 speaker cabinet in it with some mics. Then we ran a load of cables upstairs into my living room and set up the amp heads, pedal boards and recording equipment in there. The box sounded really great because there was an amp in there turned up full but with nowhere for the sound to go, so it sounded pretty intense. All the guitars on While Spectre Waltz were done that way. We’re finishing recording the album with Harvey Birrell who has produced lots of amazing British rock albums and was the main guy at Southern Studios for many years, that’s where Psychocandy was recorded. I think its important for an album to sound like the band playing in the room, but having the band playing in the room is generally not the best way to achieve that. It seems counterintuitive but you have to go through the heartache of trying to get everything as perfect as possible. We’re not interested in being ‘punk’, I’d rather play something over and over 500 times if it means it is going to be perfect in the end.

Q. Which new bands do you recommended?
There are some really cool new bands in England at the moment like The History of Apple Pie, Cheatahs, Spectres, 93millionmilesfromthesun, Thought Forms and loads more. We saw a band called Relics opening for The Fauns recently who were really special. Also, I really like a Scottish band called Life Model too, they seen to have a really confident, sexy feel to them, they could easily be one of those bands that transcends the ‘indie’ scene and becomes a big pop band. The Cherry Wave’s first album is solid too, it sounds like everything is about to explode. Also there is a band in Manchester called Altar Flowers who are probably going to be massive once everyone realises how good they are.

Q: Which band would you love to made a cover version of?
There has been talk of us doing a cover of Dire Straits’ Tunnel of Love, haha, not sure that will ever actually happen. We’ve never played anyone else’s songs really, even at rehearsal so I don’t even know if we can. Actually, we once played Pink Floyd’s Wish You Were Here, it sounded awful, so we stopped. We’ve got lots of half written songs lying around so playing covers seems like we’re wasting time we could be devoting to finishing up our own tunes if you see what I mean? I’d love to do a massive fuzz version of Bonnie Tyler’s Total Eclipse of the Heart, but there’s no way I’d be able to sing it, maybe if we had a week on our hands with nothing to do and an incredible girl singer standing in.

Q: What´s the plans for future....
We’re not one of these ‘world domination’ bands. For now we just want to finish our album and start recording new songs and maybe play some festivals this summer.

Q: Any parting words?
Buy a cheap guitar, a large amp and some pedals, then start a band, it’s fun.
*
*
*
Thanks