Turning with Beach Bully - An Interview 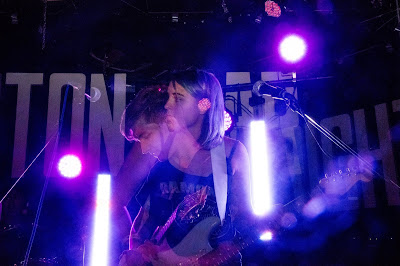 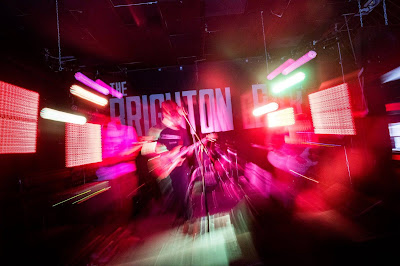 Q. When did Beach Bully begin? Tell us about the history...
Aidan: We're still very new, and the band has only been around since June of last year, and the current lineup has only been around since about September or so. Really, I would just send friends demos of my songs, usually Catherine Wheel, and then eventually a group of people formed. I went through 2 other bassists until we hit Kevin, and we kinda just clicked immediately. Kyle actually joined as a temporary drummer a few weeks after I started playing guitar for his band, and he eventually warmed up to the idea of staying cause Kevin and I liked his drum style that much.

Q: Who are your influences?
Aidan: I'd say The Smiths is probably the biggest influence for my guitar parts, ever since I discovered them I wanted to play guitar like Johnny Marr. Our song Catherine Wheel was actually a product of me listening to "this charming man" on loop. Alex G, and Elliott Smith is where I take a lot of inspiration from on vocal melodies and harmony, and then I think Ride is a big influence subconsciously even though I've never consciously tried to emulate their sound.

Kevin: For my bass playing, I feel like Mike Dirnt from Green Day has been my biggest influence. Even though I'm playing in a experimental post-punk band, while writing some of the bass lines, I listened to Green Day's "Kerplunk" on repeat trying to fuel my ideas and my passion. Jimmy Eat World also is a big influence for both my basslines and my backing vocals.

Q. How do you feel playing live?
Aidan: Absolutely love it! For me it's one of the few things I DON'T get nervous doing. I remember the first show we had I was like shaking about performing, because I thought I was gonna be too stage frightened to play since I always struggled with presentations and stuff like that, but as soon as I started playing it almost felt euphoric in a way.


Kevin: It's incredible. The feeling you get when you're onstage is unlike any other. I started acting in high school, but that doesn't compare to performing music that YOU write to new people every other week. Its amazing and I wouldn't trade it for the world.
Q. How do you describe Beach Bully sounds?
Aidan: Damn, that's a tough one to answer. Kevin always says "We're the strokes with more reverb", which is a decent explanation of our sound, I guess. I really just think of it as post-punk music with a bunch of effects and more vocal harmonies.
Kevin: Basically, we're The Strokes with more reverb.

Q: Tell us about the process of recording the songs ?
Aidan: It was really exciting, this was my first time ever recording an album. Previously I made demos of my songs at home, so I had some experience recording. there was a bit of struggling to get our engineer to do what we wanted, but overall he was a nice guy, and I'm pretty damn impressed with how he mixed it.

Kevin: I've only recorded an album in a studio one other time before Beach Bully, and this was much better than the first. Not only was our sound engineer so much better, but the overall experience, making music with some of my closest friends, was amazing.
Q. Which new bands do you recommend?
Aidan: Definitely check out "Cerulean Blue" they're this neo-psych band from Philly that I once played with in my other band, I had my jaw dropped their whole set, it was just absolutely incredible to listen to.
Kevin: Check out "Melatonin Dreams". Hands down one of the best math-rock/emo/experimental bands I've heard in NJ. They played in my basement (sometimes bands play in my basement), and I was stunned by how good these guys were.
Q: Which band would you love to made a cover version of?
Aidan: I've always liked the idea of playing xiu xiu songs in a more accessible way, their music is incredibly interesting, but Jamie Stewart's vocals tend to turn people off, which is a shame.
Kevin: Aidan and I have been talking for a while about doing the Elliot Smith song "St. Ides Heaven", and it's always a song I've wanted to cover from the day Aidan showed it to me.
Q: What are your plans for the future?
idan: Releasing an LP would be something I'd like to do. The plan for me right now is really just to try and get more people to listen to our stuff and make more music.

Kevin: Definitely to work on an LP, we're currently working on some new music and I can't wait to have it all recorded and to release it to the world. That's all I want; to spread music to the world.
Q: Any parting words?
Aidan: Yeah, check out our drummers band "Future Reflection", and thanks for the opportunity!
*
*
*
Thanks