I'm Disappointed In You with Vicious Blossom - An Interview 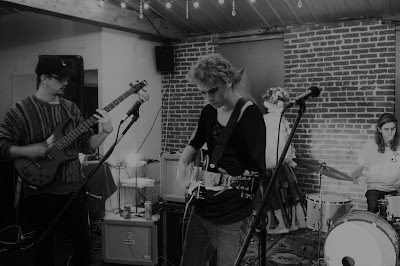 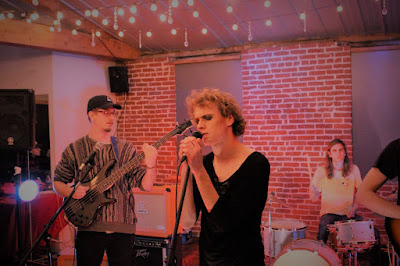 Q. When did Vicious Blossom begin? Tell us about the history...
Vicious Blossom began in the fall of 2015. We didn't have a name yet. Hollace Kimmet and I bought a bunch of music equipment and began to write songs and record them.

Q: Who are your influences?
We all have quite a range of influences. I really like R.E.M., My Bloody Valentine, Aphex Twin, Ween, Black Moth Super Rainbow, Medicine, Helen, cLOUDDEAD, Magnetic Fields, Spacemen 3, Husker Du, Pink Floyd, and so many other artists. I know Hollace really like Swirlies, Deftones, Botch, Sonic Youth, and Blue Smiley! The way the album is constructed with short, instrumental songs after each song is heavily influenced by My Bloody Valentine and Boards Of Canada.

Q. How do you feel playing live?
It is like an outer body experience at times. I get this rush of euphoria like never before. I feel like I am truly myself. When I look up and see a crowd of people moving and singing along within the colored lights, I feel like everything is in its place. Our shows are much heavier than what you hear on "I'm Disappointed In You". There is still a lot of drone and dreamy guitars and vocals, but there is also a lot more distortion, heavy bass and drums, and we play a little faster. We have a lot of energy when we play. I feel like it's an outlet for a lot of repressed thoughts and emotions. We also try to have unique visual art at our shows. Our first show, we had nude female models in BDSM masks holding flowers. During the last song, they passed the flowers out to the audience and them poured fake blood over each others bodies.

Q. How do you describe Vicious Blossom sounds?
Dream punk, which I consider to be a crossbreed between punk and dream pop. I've had people say the hear Boards of Canada, Black Moth Super Rainbow, and Beach House in our music. Someone said our live shows remind them of the Butthole Surfers, which is cool.


Q: Tell us about the process of recording the songs ?
Almost everything was recorded on a Tascam 8 track. A few things were ran through Noah's interface. I wrote the guitar tracks and lyrics, Hollace did the bass and drums, Noah did the synthesizers, and Maya sang back up vocals and did the vocals for "Amour". Noah and I produced the album, and Noah mixed and mastered it. It took almost 2 years to finish. I was going through a hard time during the process so it took awhile. All the lyrics in the album relate to what I went through during that time. One of my favorite things about recording was buying my Vocoder pedal. With shoegaze and dream pop, there's a lot of drony guitar and vocals, and the vocoder is a combination of guitar and vocals, so I thought it worked out well and was something new.

Q. Which new bands do you recommend?
I am really into Helen. A project that Liz Harris of Grouper is in. They were a huge influence on the E.P. They have such a unique and lovely sound. I consider that to be dream punk. I love "Flyying Colours". I can't get enough of their new album. "Panophonic" is really cool. We are playing two shows with them in February to support their new record, which is fantastic. I also like Stargazer Lillies, Static Daydream, Morelings, Teen Suicide, and many others. There is a local band "Sleepy Limbs" that I admire. 2 of the members are recording our first full length album in February. They are lovely people that I am grateful to have in my life.

Q: Which band would you love to made a cover version of?
I really want to cover "Don't Laugh (I Love You) - by Ween.

Q: What are your plans for the future?
There is quite a few. Playing more shows is something we are doing and are always looking to do. I am planning on releasing the E.P. on vinyl, We are also recording our first album at The Kaleidoscope in February and we also plan on releasing a 2nd E.P. I also want to make some shirts soon.

Q: Any parting words?
To all who have listened to my music, bought my music, and loved my music, you mean so much to me. Thank you dearly!
*
*
*
Thanks