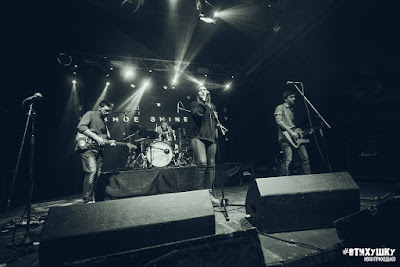 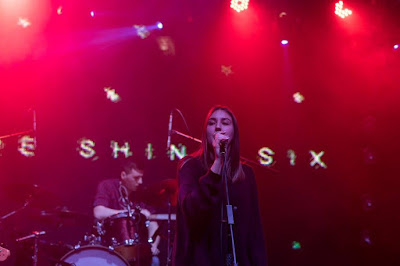 Q. When did Shoe Shine Six begin? Tell us about the history...
I guess the very beginning was in 2014, when I (Mikhail) bought some kind of rare bass guitar from Pavel. When we realized, that our music tastes are practically the same and we have a bit of unfinished tracks, that was written to the “drawer”, we helped each other to crate and modify tracks during the next few years. In the end of 2016 we realized, that our tracks were finished, and should be played with full set of band. Sergey and Katarina joined band during the first half of 2017 when we almost tired of looking for another musicians. A part of them were not qualified, but the other great part did not like this kind of music. However, after Sergey and Katarina joined this band, we started to work as hard as possible on tracks. In the autumn of 2017 we recorded the first 4 tracks and formed an EP “Sunday”. The great contribution to our music was made by Aleksey Petrov, the one who mixed and mastered our EP, but instead of this, he gave us valuable advices about our final sound. What about other tracks, we are playing them on live sets, and decided to include them into the following album.

Q: Who are your influences?
Firstly it is of course shoegaze and noise bands like Slowdive, Sonic Youth, Weed, Alison’s Halo, and A Place to Bury Strangers. Other influencers are The Cure, Siouxsie and The Banshees, The Saddest Landscape, Fugazi, Public Image Limited, Converge and so on.

Q. Make a list of 5 albuns of all time…
It is quietly hard to choose only five albums, but we will make an attempt:

Q. How do you feel playing live?
Some kind of nervous, but also surprisingly high soul fly. At the current moment we are trying not to make frequent live sets, so every set is the great event for us. However, during live set there is a sense, that music enspheres us and unite every band member with audience, there is no Pavel, Mikhail, Sergey or Katarina or any particular viewer, there is a Shoe Shine Six.

Q. How do you describe Shoe Shine Six sounds?
It is a melody breaking through the wall of noise.

Q: Tell us about the process of recording the songs ?
Firstly drums recording, which were created during the rehearsals. Then Pavel took his guitar and at first time recorded what he created on rehearsals, then there comes inspiration and guitar modifies recording and new parts adding. However it is not enough with guitar! When listening to guitar recorded, there is a sense, that it is not solid enough, so Pavel records from 2 to 10 duplicating guitars of main riff. After that Mikhail recording his bass, which is partly differs from previous versions of this track and Katarina records vocals. After that started a magic by Aleksey. We really do not how, but the recorded tracks changes their sound into that one we wanted. As daily job interrupts the music creation, recording process could long for months.

Q. Which new bands do you recommend?
We actually do not know, could these bands be considered as new bands, but: Shy, Low; Nadryw, Offret, Blankenberge, Materic.

Q: What are your plans for the future?
Release the second album, get an experience of live sets and make a tour. As for more distant future… Well, we will know it after second release.