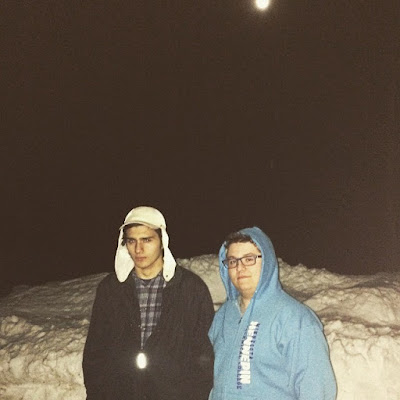 
Q. When did Parsy begin? Tell us about the history...
So this project was sort of born out of bedroom recordings I made as soon as I was capable of putting a song together. I jumped around playing instruments growing up (piano, violin, upright/jazz bass, drums, guitar) and only started taking them seriously enough my last two years of high school. My senior year I was playing drums and singing in a psych rock group with some close friends from high school (https://thehalogensband.bandcamp.com/releases) and on my own I would use my brother’s USB mic to record demos at home to potentially bring to the band. Those tunes ended up being split between the first set of demos (EP1) I ended up releasing at the beginning of my 2nd year in college and unreleased Halogens post-EP demos that I eventually released on IV. That was also when I moved from Minnesota – where I grew up – to Colorado, where I’ve been spending the most time working on/releasing tunes n such.

I’ve always been a fan of lofi & the first couple EPs are pretty simple songwriting-wise, songs usually being around/less than 2 minutes and not too many parts. I’ve only recently been able to confidently write two or three chord progressions for a song & experiment w melodies n vocals, it’s a good time.

Q. How do you feel playing live?
It’s been sparse, but I enjoy it for sure. So far I haven’t played a live show performing my solo music, but I just started jamming with my drummer friend Nigel here in Colorado, and we’re hoping to start playing some open jams/house gigs/other shows once this semester is over.

In terms of actual feeling though I think Kevin Shields described it pretty well in the documentary “Joy of the Guitar Riff” where he explains it as a sort of trance-like euphoria (when things are going well, I guess).


Q. How would you describe Parsy´s sounds?
Over my 4 releases I’ve moved sounds around a bit but always hovered around dream pop, bedroom rock, lofi, quiet, psych, and have even started to get into jazz/bossanova chords a bit on my 3rd & 4threleases.

Q: Tell us about the process of recording the songs?
Most songs come out of when I’m able to match solid guitar and vocal melodies. If I feel good about a part nowadays I’ll sit on it & try to come up with a second chord progression or some sort of change-up. If that all works out I usually end up recording that rhythm guitar part on a drum loop, and then I listen to that while I jam out a bass & lead guitar part, hopefully having some sort of an idea for vocals.

For vocals, I usually just sing nonsense words with a melody over the chord progressions until I find something that’s fits in, and then try to match words to the sounds & syllables I was making. Not to sound as pretentious as humanly possible, but its sort of a stream of consciousness in terms of the actual words that end up being the lyrics, often oddly applicable to what is going on in my life at the time.

Also, I find myself writing new songs pretty much strictly in periods of stress or sadness, which is probably part of the reason my lyrics can be so goddamn depressing at times (for me at least).

Q. Which new bands do you recommend?
A dear friend John (played bass/guitar in the Halogens) moved to North Carolina and started expanding on his solo tunes over the past couple years. John always had clever, sophisticated taste/humor from an early age and it definitely speaks out in his tunes. I’d describe it as lofi, indie, jangly, dream pop, a lil experimental, etc.

My favorite tunes of his are “bleepbloop, Bowsers Remorse, and joy in crying”
https://self-helpguy.bandcamp.com/

Frankie here is another dear friend from the Halogens. He played keys & drums as well as produced all and every Halogens release. His production abilities always blew me away as he was pretty much the driving force behind taking band ideas the other 3 of us would come up with and then evolving/developing it into a seriously next level and professional sounding demo.

On his own he makes beats as Echo Kid, and I’ll plug his ambient project, Lo Mismo. Especially on his full-length release, Frank kills at layering old record samples as well as his own instrumentation (he plays piano & cello as well) into the some of the most atmospheric/chilling/haunting, yet beautiful compositions. If I remember right Frank was also interested in writing film scores and pretty much after 1 listen through “This Beautiful Place” you’ll be able to see how well it would fit in that realm of production. Reminds me of the soundtrack to Inception.

My faves of Franks are “Caught In The Wind, and Somniferum”.
https://lomismo.bandcamp.com/

Furthermore, both of these guys were pretty deeply involved in the 2nd half of IV, my first (and only) full-length release.

Q: Which band would you love to made a cover version of?
I’d say either Good Morning or Deerhunter. I fell in love with Good Morning’s lofi sound and shortly after recorded covers of 4 of their tunes soon after I had started listening to them. Definitely still influenced by them to this day.

And Deerhunter because when I jam I always tend to play a few songs by them to warm up. I guess I’d say I’ve been inspired by the experimental aspect of their sound and the vocal style of Bradford Cox & Lockett Pundt has always been pretty heavy influence on me as well.

Q: What are your plans for the future?
Hmm I guess for now just trying to graduate (NRSC-BA from CU Boulder) and music-wise I’m pushing to start actually getting shows going. Also, even though I dig the process of recording & self-producing songs, I’ll hopefully get into a studio at some point for a little boost in production quality. Also might release some B-sides from the last album soon.