Reality of It with Sicayda - An Interview 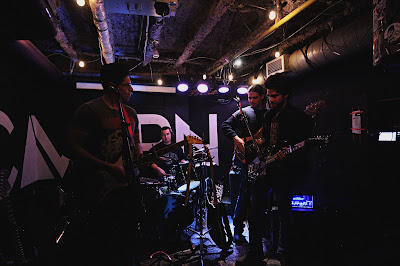 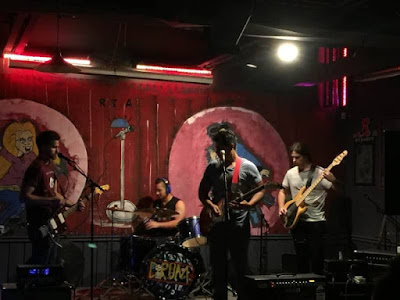 Q. When did Sicayda begin? Tell us about the history...
I suppose “Sicayda” starts with story of our sound, which started about 10 years ago with Guitarists/Singers Kevin and Marcos. We’d been friends for about a decade and started making music together around the age 15/16. Our main singer/guitarist Kevin was only really playing guitar for about a year and Marcos had been playing for several years. Marcos introduced Kevin to rock music in general and through more alternative bands like Radiohead, we got into more and more experimental rock such as Sonic Youth, Dinosaur Jr, The Cure – that was really the most significant shift in our tastes because it was probably the most experimental rock we’d been exposed to that influenced us sonically. With Sonic Youth we also found alternate tunings and grew fond of making our own because we’d grown tired of standard tuning. A little while after that we both seriously got into shoegaze. It’s the classic story: MBV, Slowdive, Ride, Cocteau Twins, etc. – but it was not only those bands that compelled us to play music. For us, we had a slight qualm about shoegaze and its heavily saturated production quality. We always loved the clear and precise production of Radiohead, Sonic Youth, and The Cure, but loved the fat and booming leads of Dinosaur Jr., Pink Floyd, Catherine Wheel, and so on. The one thing these bands usually hand in common was their creativity, atmosphere, emotional range, and clarity, so our sound naturally started to build around those ideals. We wanted a punchy, tone-driven sound that kept the ambience and hazy wall of sound that shoegaze offered, but with clearer, more interesting vocal numbers and instrumentals that we were capable of reproducing on stage. After playing a few shows as our former band Colour Zero, a friend of ours said, “I don’t know what genre you guys are but it sounds like it would be… ‘tones’.” We really liked that, so amongst ourselves we’ve taken to call ourselves tone rock.

Eventually Colour Zero’s rhythm section went their separate ways, and we went on an extended hiatus and we weren’t entirely sure where we were going. But we kept practicing our old songs and finally came to a more mature idea of where we wanted to go with our music. With another big push, we met our future members Ian and Zach. We met Ian this past June and he automatically blew us away with his playing. He threw together one of the most amazing sounding “auditions” we’d ever heard and we were both visibly impressed. We’d never heard a shitty $200 drum set sound that good. After that, in early July we got a message from Zach for an audition. At the time Zach had several projects going as well and he initially only offered us his recording services. Luckily for us he decided to it wouldn’t hurt to audition for the band, so he trekked from Burlington the same day he messaged us. For our audition with Zach and Ian we asked them to learn a song we had made years ago called “Only Worried”. We sent him a bare bones tab of the song and we didn’t expect him to know the entire thing; we just wanted to see if he was serious or not. To our surprise both Zach and Ian learned the song very well. Both of them became more situated into the band and we have grown closer as the musical chemistry in the band has started to flow effortlessly. Zach himself recorded our demo. We’ve done a good number of shows, made a fair amount of cash compared to any time in our musical history, printed shirts with our very own band art by friend of the band and we all feel ecstatic about all the progress we’ve made in such a short period of time.

Q: Who are your influences?
It spans a few decades but a good mock up would be:

Q. How do you feel playing live?
As the years have gone by we’ve gotten used to it but usually we have a reasonable amount of nerves because we want to play our best. A friend and former band member put it in very interesting terms: “If you’re nervous, it shows you care.” I felt like that helped a lot for the last show we played opening for some big bands in our scene. And of course, when the music starts, it quickly washes those nerves away, too.


Q. How do you describe Sicayda sounds?
It’s a tone-driven, ambient, yet saturated sound, with the guitar layers creating a tug-of-war that forms a very bright wall of sound with light (and at times powerful) melodic vocals. Ian and Zach provide a solid, articulate, and punchy backbone for this “bright wall”. Our themes tend to have a flavour of bittersweet youthful melancholy.

Q: Tell us about the process of recording the songs?
Kevin and Marcos do the primary song writing. Typically, one of them crafts a song’s rhythm guitar and sometimes vocals, and then pass it on to the other for feedback. Once the song becomes more solid, the second guitar/vocal parts are made. After that we work on the rhythm section with Ian and Zach.

Actually recording our demo was a marathon. Zach tracked drums, guitars, and vocals with the band in the span of 17 hours over 2 days. Special care was taken to preserve the sense of space in the instruments - the drums were recorded using figure-of-eight microphones in place of traditional overheads, which were left set up for guitar tracking and used as room mics. Our rehearsal space is acoustically very lively, basically being a concrete coffin of a garage, and we think that feeling is captured by the recordings.

Q. Which new bands do you recommend?
In the short span of time playing shows as Sicayda, we’ve met some amazing local talent situated around Toronto. Check out: Low Kites, Tonemirror, Milhouse, and The Dead Projectionists. Back in September we opened for a Boston-based psychedelic math rock band called Bat House which got us looking at the math rock genre in a totally new way. At the same show we met Tonemirror, who have also contributed to this blog, and are all-round great guys to work with.

Q: Which band would you love to make a cover version of?
We probably owe Sonic Youth an entire tribute album, haha. Marcos would love to cover The Cure’s more complicated songs like “Open.” Zach would love to give some Baroness the Sicayda treatment.

Q: What are your plans for the future?
For now we will continue playing and trying feverishly to gain more exposure; keep working hard in and out of music ensuring all avenues are covered to support the band. We'll be writing another batch of material in the next few weeks, and recording another set of demo songs this winter. We're also setting our sights on bigger shows and possibly festivals. We’d love to release our first LP through a label if possible and get to the point where we are recognized in the niche and continue to grow and see where that takes us.

Q: Any parting words?
First we are super grateful to be on the blog, especially considering the amount of material we have released so far. We’re happy to see that we have fans out there in the world. We invite anyone to give us a message/email, listen to the music we’ve released so far and keep following us as we go on this journey and we promise to continue making good music for those who want to experience a fresh take on what are often tired sounds; passing our passion and our feelings through music.
*
*
*
Thanks