Longing For Home with Starsabout - An Interview 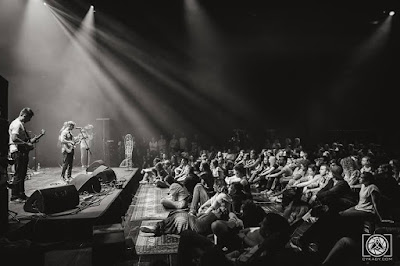 Q. When did Starsabout begin? Tell us about the history...
Starsabout’s history began in late 2011 when I met Tomek Kryjan and we started doing jam sessions as a duo. In 2012 we found our rythm section - Piotr & Sergiusz - and from the first rehersal we knew that this is ‘it’. Since then we’ve been playing together as a band - Starsabout.

Q. Make a list of 5 albums of all time…
Jeff Buckley ‘Grace’
U2 ‘The Joshua Tree’
The Blue Nile ‘ High’
Radiohead ‘Kid A’
The Verve ‘Urban Hymns’

Q. How do you feel playing live?
We love it. It’s an amazing feeling. Most of our songs are designed to play live, especially the long ones like ‘Bluebird’, ‘Sway’ or ‘Cry Me No Tears’, which take listeners on some kind of journey. In June 2017 we were a part of one of the best cameral music festivals in Central Europe – Halfway Festival in Bialystok, Poland and we had the honour of sharing the stage with such great international artists like Juana Molina, The Veils, Christine Owman, Angel Olsen. It was one of the best concerts we’ve played so far.


Q: Tell us about the process of recording the songs ?
We spent almost eight months writing the new material. Most of the songs I composed alone at my home and then I showed the sketches to the rest of the guys and we were working on them together during the band’s rehersals. Meanwhile, I was writing the lyrics together with my wife Joanna. All the songs got their final shape when we had entered the studio. During the recording process we were experimenting with some new sounds and instruments: we’ve used different guitars and effects and for the first time we enriched our music with synths and violin. I hope the result is satisfying for listeners.

Q. Which new bands do you recommend?
Maybe they aren’t completely new, but… here are some bands I’ve been listening to recently: Cigarettes After Sex, Nomads, Nothing But Thieves, Future Islands. I would also like to mention Seasonal – a solo project of Polish musician Maciej Sochoń, who also contributed on our new album ‘Longing For Home’ (the track ‘Hourglass’).

Q: Which band would you love to made a cover version of?
We would love to make a cover in the near future. Maybe some piece of A-ha, The Cure, The Verve or The Blue Nile’s repertoir? We don’t know yet, but we’re definitely thinking about such thing!

Q: What are your plans for the future?
We would like to play more live shows in upcoming years. That’s the main goal right now.

Q: Any parting words?
Thank you so much for this interview. We’re happy that our music is interesting for Brazilian listeners. All the best from us!
*
*
*
Thanks