Hand Mirror with Being Awone - An Interview 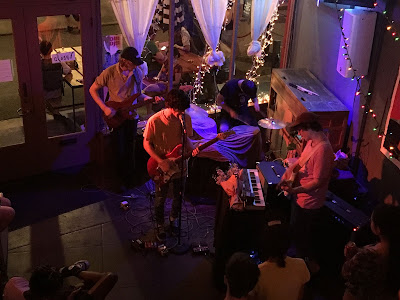 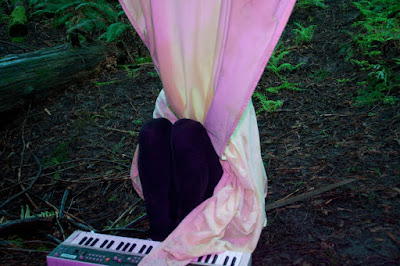 Q. When did Being Awone (wilt) begin? Tell us about the history...
A: I started writing stuff under being awone after having made ambient and electronic music for a few years under my birth name. After highschool i just started writing more guitar and vocal-centric music and felt that it had a different sound and described a different place/feeling than my other music had. Another big element was a small casio piano that I had found as child under my grandmother's bed. I started using that in being awone stuff and it really influenced my sound and directed a narrative for the type of music i wanted to write under this project. Within the last couple years other members from portland projects have joined the band and we've written things more collaboratively. The project is always changing and I try to leave it open to new motifs and ideas.

Q: Who are your influences?
A: as far as influences go I definitely came from a background of IDM and ambient electronic music. From that background i ended up branching off into the DIY and punk scene in Portland. So it's a mix of those two forces really. lots of Indie rock, punk, ambient and experimental music. I made a lot of music alongside other DIY musicians on the label Oligopolist Records. A lot of musicians on that label influenced me greatly. My friends in the band influence me a lot as well. More recently everyone on Good Cheer Records has spurred me creatively. Specific/ recent influences have been acts like Mirror to Mirror, Cocteau Twins, The Sundays, Duster, Guided by Voices, Coaltar of the Deepers, Pillowdiver, Stars of the Lid, Black Pus, and a myriad of metal, shoegaze and local bands that I look up to.

Q. Make a list of 5 albuns of all time…
A: hmm 5 albums of all time is hard and probably not gonna be very concise as far as my influence but here's some stuff off the top of my head that means a lot to me.
1. Aphex Twin - Richard D. James Album
2. mirror to mirror - body moving slowly
3. mum - finally we are no one
4. The Sundays - Reading, Writing and Arithmetic
5. duster - christmas dust

Q. How do you feel playing live?
A: Playing live is really fun, I've never really been in a band where i wasn't playing drums until now haha. I'm definitely always a little disappointed in my own ability as far as singing and overall execution goes, but playing with the musicians I do is so fun and super inspiring. I've been performing for long enough to were i just take it for what it is and am grateful for the scene I get to be apart of when performing. It's always hard to get the motifs and feelings you want to express across in a live setting, but I like trying. It's a privilege for sure, and definitely cathartic.

Q. How do you describe Being Awone (wilt) sounds?
A: being awone is a lot of metaphors for contemporary life, specifically my experience through a surrealist/fable sort of lens I guess? I imagine it as sounding like you're skipping through tape memos and song scraps that a little bird in an empty house recorded.


Q: Tell us about the process of recording the songs ?
A: A lot of the recording process is me jotting an idea down/singing and playing guitar on a tape recorder, bouncing that idea into a laptop or 4 track and then layering ambience and beat patterns on top until it sounds fleshed out. Kind of like a collage or scrap book? Idk, my mom used to keep a lot of scrap books so maybe that's why I do it that way.

Q. Which new bands do you recommend?
A: No particular order to this but here are some really good artists in Portland right now.
1. Rod - the drummer in my band writes really personable and heavy power-pop.
2. Surfer Rosie - super expansive indie rock.
3. Drowse - i play drums in this band, but the project is mainly Kyle Bates' music which is all super beautiful and unique.
4. Floating Room - all friends and musicians I look up to heavily, dreamy, beautiful, dreary, loud post-rock.
5. Itasca Phasar/italics/magic dj/wagner - so many projects by this artist but they're all incredible and they are a really good friend/ person.
6. Studenets - a beat/ ambient musician that's helped me and influenced me a lot, also an incredible person.
7. Mo Troper - master song writer.
8. The Exquisites -

Q: Which band would you love to made a cover version of?
A: Their are a ton of songs by The Sundays that I want to cover, also The Cardigans, but my level of musicianship isn't on par. I've also always wanted to cover the entire Kirby Crystal Shard OST as well.

Q: What are your plans for the future?
A: Always trying to record more and write more. I want to tour more as well. The goal is a longer tour every year. DIY touring is hard though.