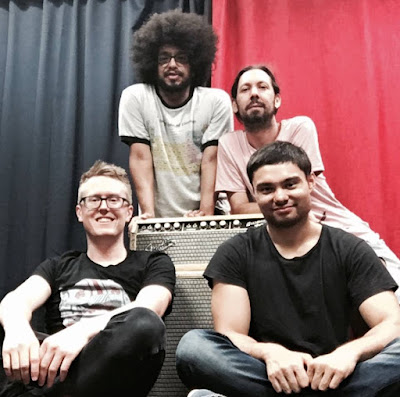 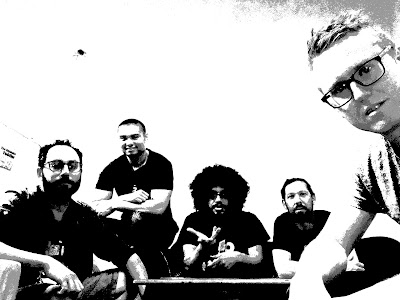 Q. When did Key Out begin? Tell us about the history...
We got together in early 2016 after I’d stumbled into some inspiration and written a bunch of songs. I’d known Rohan from an old band of mine, Ides of Space, who used to play with his old band Sounds Like Sunset. We collected some more members and made a recording of those demos, and have rolled on from there.

Q. Make a list of 5 albuns of all time…
Polvo, Exploded Drawing. This record changed the way I heard music. I learned to play guitar sitting around trying to decipher just how they had tuned their guitars and how they made the noises they did.

Slint, Spiderland. I couldn’t believe how young these guys were when I saw pics years after this was released. One of the most haunting and otherworldly records I have ever heard.

dEUS, The Ideal Crash. Real subtle sophistication in this songwriting, and a great video for the single Instant Street.

Ride, Nowhere. Vapour Trail remains one of the greatest pop songs of all time, and white noise moments (e.g. Dreams Burn Down) still give me shivers.

You Am I, Sound as Ever. A formative record for me – this was the first band I saw at an underage gig at a youth centre.

Q. How do you feel playing live?
It’s a great feeling. and when it’s really great, it’s often a blur. You climb on stage, get lost in a moment, jump around and then it’s last song…


Q. How do you describe Key Out sounds?
One review of our previous ep said it was ‘Dreamy indie pop served with a side of melancholic rock’ and that was ‘full of melodic indie/rock jams that feel snatched out of the late 90’s but done with a modern spin’. I think that’s pretty close.

Q: Tell us about the process of recording the songs?
For our new ep Rohan and I spent a day in a studio recording drums to a live guitar, then I took tapes home and built on those skeletons, layering guitars, vocals and so on. Martin joined the band during this recording, so I asked him to throw as many keyboard lines at it as he wanted, then we mixed the mass of tracks into some sort of coherent piece.

Q. Which new bands do you recommend?
We’ve played with and seen a bunch of great bands in Sydney over the past year including Hannahband, Games Night, Hazey and Oslow.

Q: Which band would you love to made a cover version of?
This probably changes each day. Ides of Space did a cover of In the Mouth a Desert by Pavement. I’ve always thought Wouldn’t it be Good by Nik Kershaw would be good cover material too…

Q: What are your plans for the future?
A new batch of songs is under development, and I have some ideas for different ways of recording/collaborating (which I’ll keep to myself for the moment in case they crash and burn). But 2018 will be about some touring and more recording.

Q: Any parting words?
Thanks for the questions and the great blog! Hope to come to your part of the world sometime
*
*
*
Thanks