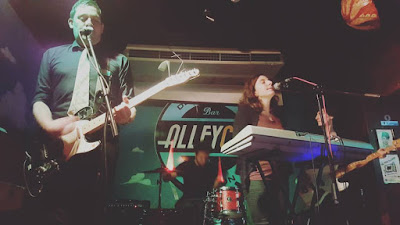 
Q. When did Useless Cities begin? Tell us about the history...
Useless Cities began like all great modern relationships - on the Internet. Tom advertised for musicians and Conny replied. They spent a few months songwriting before finally recruiting Sebs and Clare to fill out the sound.

Once the band had completed the line up (in January 2016) everything moved quickly. We played our first gig 8 weeks later and then booked studio time for our first EP. After we sent out CDs we were pleasantly surprised by the response to our music and haven’t looked back since.

To date we have now released two EPs and 1 single, picking up the indie shoegaze moniker along the way.

Q: Who are your influences?
We each have different tastes, although mainly within the indie scene. Generally we like moody indie bands like Arcade Fire, Interpol, The National, Mogwai.

Tom is the tastemaker in the band (although he’d hate me saying that), and tends to know a lot of obscure bands.

Conny is into some of the more modern indie bands, like Beach House, Temper Trap. She is also love Depeche Mode, especially after seeing them live.

Sebs is into a bit more energetic indie.

Clare loves The Cranberries and is always chuffed with any comparisons.

Q. Make a list of 5 albums of all time…
The Cranberries - No Need To Argue
Depeche Mode - Violator
Daughter - If You Leave
Beach House - Teen Dream
Temper Trap - Conditions

Q. How do you feel playing live?
Playing live (along with recording in the studio) is our favourite.

It’s always great to get a reaction from the audience. Playing live gives us energy and leaves us feeling fulfilled.

Q. How do you describe Useless Cities sounds?
It’s definitely indie with a lot of reverb. This has been called shoegazey or miserable indie. It was recently called “Cerebral Indie” which isn’t a bad thing.

With Paul we didn’t “drop in” like we usually do to improve on previous playing, we just played the whole song over and over. I think it was to preserve the energy. It was a lot of work, but we were really pleased with the sound.

The whole band stayed for the full recording session, even when we weren’t needed. It was just great to learn about the different techniques involved and show a bit of support for the others. We tried out an E-Bow on one of the tracks but ended up replacing it with synths.

We are hoping to record another 3 before the Summer. Our songwriting is quite prolific so it can be a bit frustrating only having a few of them recorded.

Q. Which new bands do you recommend?
We’ve played with a few cool bands over the last couple of years. There are a couple of ones that stick out. There’s a band called Bugeye who are doing really well at the moment and releasing some great tracks. We also had Fortnight in Florida play at our launch party in March, they are a bit like Hot Chip. There is also a London band called Moonlands who are doing some interesting music too.

Q: Which band would you love to made a cover version of?
ABBA would be a good one as they have great instrumentation and work well as an indie cover (see Super Trouper by a band called Camera Obscura). Their baselines are always ridiculous.

Q: What are your plans for the future?
We have two more singles recorded and ready for release in the first half of 2018 which we recorded with Paul Tipler (he has produced some of our fave bands, including work with Slowdive, Placebo and Idlewild). 2018 should also see some interesting videos to go along with the singles.

Q: Any parting words?
We might look and sound a bit gloomy, but we are having the best time recording and playing. Come and have a chat after shows or email us to talk about music (it’s always a pleasure!).