Ossuaire with La Peste - An Interview 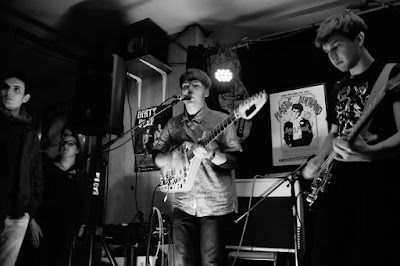 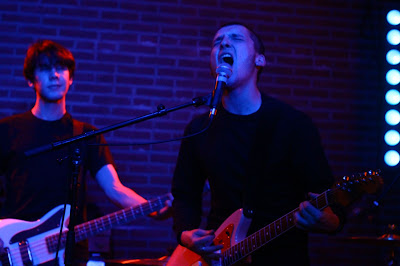 Q. When did La Peste begin? Tell us about the story
Lizard : We’ve been playing together for almost four years now. I have a band with some friends called Blue Mountain Expansion, and at that time we recorded some accoustic demos with Arnaud in his parent’s attic. By then we started to hang out regularly.

Then, I went on a 6 month trip in Canada during witch Arnaud and I echanged a lot. When I came back we recorded a 3 tracks demo in Arnaud’s attic, it became our first EP as La Peste. It was with a drum machine, in a very lo-fi way, still his parrent’s attic. This place is important for us...

After the publishing of this first act, we faced a lot of demand in terms of "live sessions". We hired a drummer for a while, then started to have a real drum machine and a bass player... And now here we are, both of us playing guitar with a drum machine and a synth to guide us through the darkness.

Q: What are your influences?
Arnaud : Too many things… But to name a few : all the Cranes Records rooster, a lot of movies and animes' scores, some Video Games' OST such as Shadow Of The Colossus. Autumn leaves through our windows… Human beings in the street… Beer and wine. Boris Vian and Romain Gary. The Internet. Frustration. Pain. Our friend Frédéric's penis. Too many things to name.

Arnaud :
- Babyshambles / Up the Shambles
- Rowland S. Howard / Teenage Snuff Films
- The Strokes / Is This It
- Some Cranes Records Stuff
- the same

Both : It’s not an easy question, here are our two lists.

Q. How do you feel playing live?
Lizard : We both love to play live. It is the best way to express what we want to channel in our songs even if we are not technical as musicians. Technicaly speaking it is rather the opposite, and one can feel it.

When we started to play live, we did not had a lot of live experience, nevertheless we just wanted to play live. We tried things that we did not always mastered, but we tried them. We are always spontanious and wild, because it is the way we are. We are happy idiots.


Q. How do you describe La Peste sounds?
Arnaud : Sad pop songs, tailorded by an handless barber. Distorsion and love, sadness and vain hopes. Live, we are loud and wild, it is the only way to make it through the show for us. It is about survival.

Q: Tell us about the process of recording the songs ?
It was the third time tried to record an album, and considering that, it was a difficult session. Any way, we did it in my parent’s attic, during a week in july 2016… It was warm under the rooftop, but Tony, our friend and ingeneer, managed to catalyse the best of us during this session.

But Ragnar and Denis of Cranes records managed to kick our asses, and pushed us to into releasing these recordings. We gave the tracks to Jaike from The History Of Colour TV (R.I.P.) and he mixed those in a beautiful way. Jaike had a very gentle and friendly approach, he really helped us into being proud of these tracks. And here it is, Ossuaire.

Q. Which new bands do you recommend?
Both : We are still stucked into the Wavves X Cloud Nothings release from 2015, it is such a master piece. It is almost two years old, but still relevant.

In terms of new bands, we don’t know. Our friend Roboy from Le Mans does a great job, he might release an EP due to January 2018.

Q: Which band would you love to made a cover version of?
Both : We Already did two cover version of tunes by other artists, one of « Velvet in Furs » of the Velvet Underground, and one by our local artist Jean Luc Le Tenia, whom passed away in 2011 , called « l’Âme du Mans ».

Recently we talked about doing other covers, we will figure out from whom… May be Blink 182 ?

Q: What are your plans for the future?
Both : Right now we have to support our release on stage, doing gigs in France and so on. We are trying new things on stage such as a bass synth, we have to figure the right way to use it during shows and sesssions… And we need to take time to write new songs anyway… Nevertheless we want to play gigs as much as possible !