Responsible People with Droopies - An Interview 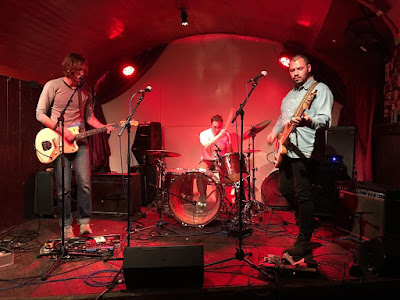 
Q. When did Droopies begin? Tell us about the history...
The 3 of us had been in bands together since high school but then separating and reforming under some different premises. Zack and I decided to take ourselves way back to the drawing board, starting completely from scratch in 2014. We ended up spending a year on the first album before John joined on bass.

Q. How do you feel playing live?
Love it! We've developed some new tricks and I feel really excited about it because we're able to do songs from the new album that I thought would be impossible as a three piece. It's a lot of work to keep track of all technical aspects and the equipment, but it's always a rush to hear it, especially if we get a decent sound system with a smart person running the soundboard.

Q. How do you describe Droopies sounds?
We try to focus on writing good parts, and capturing good performances on the main instruments, which is why I also get to craft sounds for the extra layers. I think we generally get remarks about fuzzy guitar sounds, which I do like, but there's even parts in there now that take on synthetic textures.

Q. Tell us about the process of recording the songs?
I'll have a demo of the song fleshed out fairly well as far as the main guitar parts and vocals will go. Then we take it as a band to figure out how it'll work. For this last album we were living in from separate parts of the country to meet up and work on it, and then I take it home to overdub parts to the drums and bass. Often I'll realize new ideas as even I'm rehearsing overdubs, so the songs will take on different directions right up until they are completed.

Q. What are your plans for the future?
Playing shows while we're writing and working on the 3rd album!

Q. Any parting words?
Thanks for reaching out to us!
*
*
*
Thanks