Pictures of Your Mind with Low Valley Hearts - An Interview 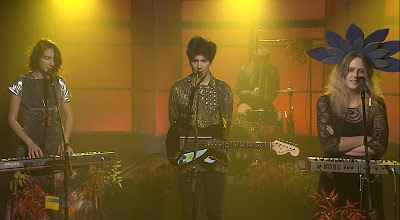 
Q. When did Low Valley Hearts begin? Tell us about the history...
Rossellini: Low Valley began with Evgenia working as a pet caretaker in the winter of 2017. The solitude of large houses filed with the energy of small animals served as the basis for many of our first songs. "Lulu" was the cat who would never come home to the "Highland House". The house had no curtains on the windows and is on a busy street where there are frequent car accidents on outside corner. The band seemed to stem from the series of events that happened around us at that time and the need to reflect on those subjects. I remember Trump :( was elected as president on my birthday and we finished our most nihilistic song "Pictures of your Mind" that night. The song is our own analysis of the devolving of the human brain and its loss of abilities that it may have once had. When a handful of songs were written we started to rehearse them as a full band with Sean and Zalika.

Zalika: I heard it came from Rossellini's garden. Then they invited me over and I was shy so I played Tchaikovsky and was less shy?

Q: Who are your influences?
Evgenia's influences range from classical composers such as Chopin and Rachmaninoff to European new wavers such as KNHO (Kino) and Air. Sean's drumming comes from the lineage of bands like Wire, Can, and Beefheart. Zalika gets deep into electronic experimentation I.E. Yello Magic Orchestra and Sakamoto.

Rossellini's list:
I can't push the agenda that these are the best albums ever but I definitely find myself listening to them a lot.
Zhanna Aguzarova's 1991 s/t album
Straitjacket Fits - Melt
Cristina - Sleep it off
The Cure - Head on the Door
Iggy Pop - The Idiot

Q. How do you feel playing live?
Zalika: It's pretty cool, I don't get nervous, but I'm too shy for it.

Evgenia: I often feel neurotic but maybe that's only a half truth. Sometimes I write parts that are too complicated for myself and it's hard to sing and play synth at the same time. Each of us in the band has our own character that we perform as and sometimes our character will change with our mood and evolution. For recent shows I've performed as "Space Owl". But I believe that your who you perform as can open a door to an alternative reality and you can be whoever you choose to be. "Space Owl", "Galactic Traveler" etc.

Sean is the drum "Drum Zebra" and Zalika was imported from the "Mystical Forest" as the "Wild Hair Fairy". Zalika told Rossellini he's the "Glam Lord".

Zalika: Post punk glam with immaculate Siberian conservatory composition and some space stuff on the side.

Q. Tell us the process of recording songs?
Zalika: We go in Ross's garden and whisper into his plants and then they send us an email with raw files that need mastering.

Q: Which band would you love to make a cover version of?
Rossellini: We were talking about covering a specific Black Sabbath song soon. Also we had covered a song by the great Israeli band "Minimal Compact" and may cover another of their songs in the future.

Q: What are your plans for the future?
Rossellini: more songs about pets, space travel, creepy stuff, food, and dysfunctional inventions. To travel where no band has traveled before and maybe do some shows at a UFO or Science convention.

Zalika: Before you sleep, don't forget to take out your contacts or else your eyes will feel like gluey suckballs.
*
*
*
Thanks