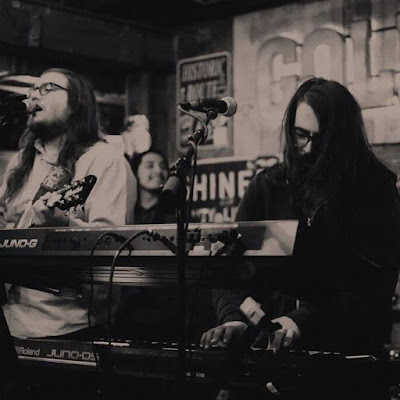 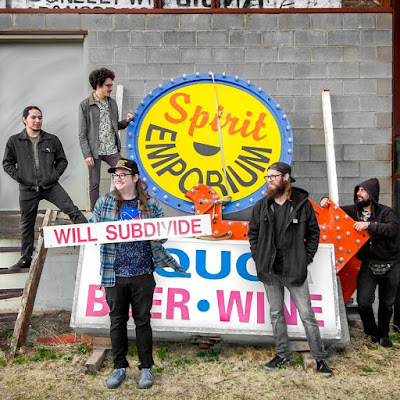 Q. When did Mount Ivy begin? Tell us about the history...
Mount Ivy is Broderick Adams (Singer, Rhythm Guitar), John Ruben (Drums), Star Child (Keys, Vocals), Topher Petsch (Bass), and Juan Duran (Lead Guitar, Vocals). The band was conceptualized by Broderick in Austin in 2012. At the time Topher and Broderick were living together and Broderick was sharing bedroom demos with Topher. Topher agreed to join the project as a side endeavor to post-hardcore project Vaudeville Cinema. Topher and Broderick moved back to Amarillo, a city in the Texas panhandle, to be joined by Juan on lead guitar. This formed the core unit of the band and the original line-up featured drummer Sidney Busbee. This lineup was in effect for a little over a year and a half before adding Star Child as the key player and about 6 months later John Ruben took the helm on drums to replace Sidney, thus creating the lineup that we currently have.

Q: Who are your influences?
I would like to say that we have an eclectic list of influences due to be from different backgrounds musically. To name a few (or a handful haha):

Q. Make a list of 5 albums of all time…
These are in no particular order due to this being one of the hardest questions to answer haha
1. Illinois - Sufjan Stevens
2. Songs from the Big Chair - Tears for Fears
3. Violent Waves - Circa Survive
4. Alive and Kicking - The Delfonics
5. Purple Rain - Prince

Q. How do you feel playing live?
Playing live together is such a wonderful experience. You can see on our faces that we receive a large depth of joy from playing together. I could say over and over that it is just a blast to play with these guys but the best way to summarize the feeling is to say that music is the truest form of magic. When you play music with kindred spirits you all enter the same otherworldly plane and experience a healing and indescribable happiness.


Q. How do you describe Mount Ivy sounds?
We usually sort of describe ourselves as space rock. To go into more detail there are several flavors going into the musical pot. We love delay, reverb and classic synth sounds. I see it as a blending of the world of classic rock music and modern ambient rock music. There are moments in the set that are large like towering land forms with huge spacious guitars and we also have some more 60's sounding surfy riffs and chamber pop influence bleeds through.

Q: Tell us about the process of recording the songs ?
We take a few different approaches to recording. The main approach we take is to lay trash rhythm guitar, get drums tracked and record the other other instruments one at a time to ensure the cleanest takes. After the tracks are recorded we like to experiment with different vocal textures to add our flare onto the recording. We have also been known to record the whole stringed and keyed ensemble together to get a more fluid sounding track.

Q: Which band would you love to made a cover version of?
We have toyed with the idea of a Cher or The Cure cover. Nothing has came to fruition yet but I have a feeling that one will happen.

Q: What are your plans for the future?
We are in the process of regrouping and looking at where we fit in the music industry this year. Likely there will be some more video content and strange interactive experiences to be had into this blooming year.

Q: Any parting words?
We just want to thank Renato for having us and congratulate him on a decade of promoting, discovering and giving new acts a platform to express themselves. We feel blessed to be a part of TBTCI and we hope to go to Brazil to perform in the near future!
*
*
*
Thanks