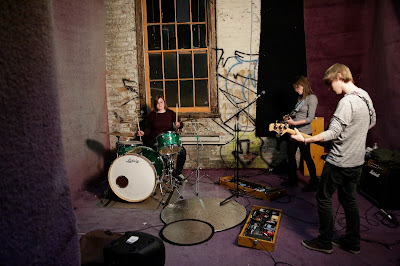 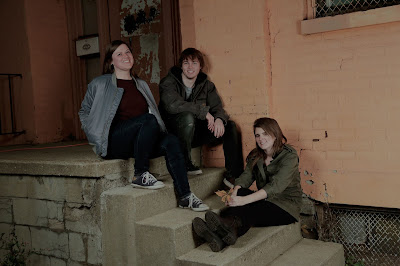 Q: When did Slow Glows start? Tell us about your history.
RT: I wanted a safe zone to better myself at the drums and to support other women. I posted something along the lines of “Female drummer seeking other femme musicians…” and the first person to answer my post was Kelli. We jammed in my basement and immediately discovered our almost identical taste in music. It was a perfect fit. Liz joined soon after on bass and was so strong in the foundation of our statement. Our lineup has recently changed to include Ian, who is an incredible bass player. Slow Glows has gone through all of the right changes in a relatively short period of time - a little over a year - to continue to explore our abilities as musicians and also develop our ever-changing genre..

Q: What are your influences?
KR: I think I was able to catch the tail-end of a lot of nineties bands being played on the radio when I was young. Oasis and Radiohead were always my favorites. As a teen I loved Britpop and classic alternative. Soon enough I also found shoegaze bands. They seemed to be made up of quiet people making loud sounds, and I feel like I identified with them more than any music I’d heard before. I’d grown up playing classical piano, so playing guitar was something I’d never considered pursuing before but I suddenly really wanted to do it. I bought my first acoustic guitar in 2013 and began teaching myself some chords, and eventually bought my first electric, my telecaster, in the fall of 2015. My first band was called Peace Attack, like the Sonic Youth song. None of us were 21 at the time and still lived a little too far from the city, so our options were and resources were more limited than where I am now, but we did put out an album of my earliest songs that I’m proud of. That band gave me the experience to bring the best I could offer to Slow Glows.

Q: What are 5 of your favorite albums of all time?
Collectively, and in no particular order, the three of us all love…

Q: How do you feel playing live?
KR: Cincinnati is a difficult crowd to impress as a new band, I feel like, because there are always a surplus of bands playing shows all over town on any given night of the week. Garage punk is what’s super popular right now, it seems, and what we do is a little different. I feel like our music would be better received on the west coast or in Europe but we’ve been doing pretty well for ourselves here so far. When I play live I have to remove myself from everything in a way – because there’s a lot going on, I have to sing and physically play at the same time and remember what effects go on and off and change throughout each song – so yeah, I have to kind of zone out for it to work. It feels like I’m multitasking, to a superhuman extent. I don’t do much on stage. I usually close my eyes a bit so that the only sense I have to focus on is what’s happening from an auditory standpoint. That’s the only way I can make it happen and be happy with how I sound.

Q: How do you describe Slow Glows sounds?
KR: We’ve been described as shoegaze everywhere we’ve played so far, and that’s a term that has generated a lot of endearment in the music world recently, I feel like, because of all the nostalgia for nineties shoegaze bands reuniting over the past few years with new music and tours. Those bands weren’t very celebrated in their heyday but the internet has made it all a hot topic now. We’ve been called dream pop too. And it does feel authentic because yes, that’s what we are influenced by, but to me, shoegaze is really just a defined chapter in what is, in a broader sense, psychedelic rock.


Q: Tell us about the process of recording the songs?
RT: Songs come together very quickly. “October” was written literally an hour before we played it out at Ladyfest Cincinnati. Most times Kelli comes up with a chord progression, I write a beat to it, Ian comes in soon after and writes around Kelli’s melody. The lyrics come later and are sometimes improvv’d which keeps things interesting…

KR: Yeah, when I write songs I have a tendency to really focus on the melodic structure, kind of like what I enjoy about sixties bands because it’s not a bad thing for songs to be really memorable and really catchy. But I like to throw on a lot of reverb and tremolo effects so that they’re given a shimmering, surreal element. They’re probably best described as being really subdued, abstract pop songs.

Q: Which new bands do you recommend?
IG: I really like Cheatahs, their album Mythologies is a one of the best recent psych rock albums out there. My favorite band from our local scene here in Cincinnati is Sungaze.

KR: There’s a lot of great local and regional talent here, but one of my favorite recent finds is the band Purple Heart Parade from Europe. They have this one song called “The Room” that’s pretty magical.

RT: I’ve been absolutely lovin’ on Bozmo’s “Leather Umbrella” which came out in 2014 but needs way more credit where it’s due. You should also check out Twen and Sad Baxter from Nashville, Soften, Lung, and Freedom Nicole Moore from Cincinnati, and The Savage Blush from Colorado.

Q: Which band would you love to make a cover version of?
IG: I’ve really been wanting to put together a My Bloody Valentine tribute show for some time. Kelli and Rachel had even expressed interest in taking part in one before I had joined Slow Glows, so maybe we will put something together at some point in the future!

RT: I have always wanted to cover The Nerves’ (or Blondie’s) “Hangin’ on the Telephone.” I also love Cleaners from Venus’ “Only a Shadow.”

Q: What are your plans for the future?
IG: We are hoping to record and release an album sometime next year, so we’ve all been looking forward to and working very hard on that. Touring is something we have yet to do and are hoping to start planning some small ones soon. However anything large likely won’t happen until after our album is released.

RT: We want to tour. If you’ll have us we will try to have you!

Q: Any parting words?
KR: We’re in the process of putting together a 7” vinyl release of our songs “Sodapop” and “December.” I’m really excited about this because it’s the first physical release I’ll have put out and it really legitimizes our efforts in a way. Those are two songs I’m very proud of and that mean a lot to me so I feel very fortunate in the fact I’ll be able to offer them to people in a format that’s more personal than digital streaming. So, keep an eye out for those in spring of next year.